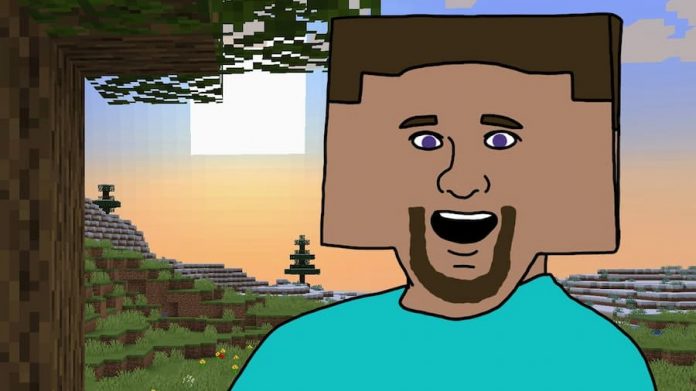 Do you like Minecraft? Do you like sleeping? This amazing, horrifying video will ruin both of of those for you.

It’s the work of Goat-on-a-Stick, a YouTube and animator who’s previously revealed the shocking truth behind speed running and elevated Streets of Rage 2’s Knife Galsia to the lofty position he so rightly deserves.

Like animator and filmmaker Joel Haver, he digitally paints over live-action footage. It’s a surprisingly effective technique, meaning you get realistic animation but you can turn the live-action actors into aliens, knights, whatever you want. Ralph Bakshi’s 1978 The Lord of the Rings used a similar technique, albeit without computers.

Goat-on-a-Stick’s new video, dubbed “Minecraft’s dark secret” is hilarious and horrifying in equal measure. It begins with a block-headed man waking up in bed, filled with joy, maybe a little too much joy, at the prospect of mining whatever he can get his hands on – stone, wood, flesh, that sort of thing.

His day proceeds normally, as normally as it can for a man with a T-shaped head, but then it takes a turn for the strange. We won’t spoil the ending but you won’t want to hear the word “mining” ever again.

You can check out Goat-on-a-stick’s channel here, which includes a wealth of game and non-game released videos. And in case you’re wondering, the video is work safe, but we wouldn’t recommend watching it before bedtime.