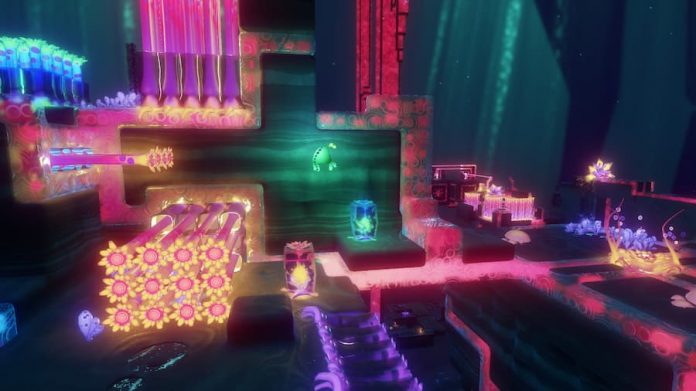 Set in a bright neon world where you’re put in control of a squishy, formless ‘mote’, Lumote isn’t your typical puzzle game.

It’s very simple in principle; you simply need to make your way around its twisting platforms, passing from one area to another. Rotate the camera as you disappear behind an obstacle, and jump and double-jump one from pillar to the next. It’s not quite so easy though; flower-shaped gates regularly block Lumote’s progress, and so to keep moving forward, they’re going to have to open them.

Essentially, that boils down to turning red areas of the world blue – while blue, power seems to flow through from platform to platform, opening up gates and allowing you to progress. You’ll control the flow by moving blocks that act as switches, getting them to the right place. But often, accessing the block is a puzzle itself, as is figuring out a path that you can take. The world responds to Lumote in weird and wonderful ways, and this is very much a game you’ll learn by doing. Grass-like tendrils can grow or shrink as you stand on them and tap a button, for instance. And as you progress, of course Lumote‘s challenges grow greater and more complex.

We’ve spent a bit of time working our way through Lumote‘s early stages, and we’re very much impressed with what we’ve seen so far. The way you’re expect to learn the ropes as you go along is hugely satisfying; there’s no hand-holding or cumbersome tutorials here. Outside of being given the basic controls, everything else is down to you. You’ll quickly get the hang of things though; the first puzzles you’ll come across are rather simple, and the same mechanics will carry on through to later, more challenging encounters.

What sets Lumote apart is that the entire game is one, huge, interconnected world. There are no loading screens and no jumping between one level and the next as you progress. One gate leads to the next puzzle, and so on and so forth. It means that this is a sight to behold as you can see the vast labyrinthine platforms of the game stretch out around you. And, considering the scale this entails, Lumote performs beautifully.

Coming to PC and consoles on 24th March, Lumote is well worth checking out if you’re a fan of quirky puzzle games. It looks great, it’s cute as heck, and we have a feeling later puzzles are going to be truly fiendish. 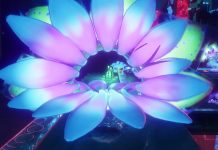