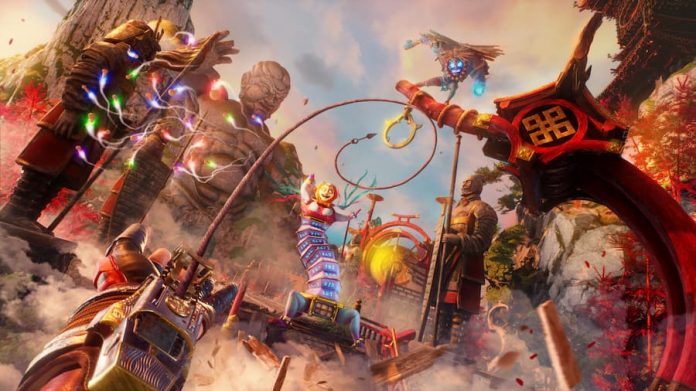 Pissing off an ancient dragon is never a good idea.

Shadow Warrior 3 kicks off with a defeated Wang, just thrashing around in his underpants. But after filling players in with the current situation via playable flashbacks, he has a reason to perk up: the reappearance of an old face means there’s a chance the dragon can be defeated. And so begins yet another crazy adventure, full of over-the-top Wang action and ridiculous one-liners.

After Shadow Warrior 2 tried to be a bit experimental with the series, presenting players with procedurally generated levels and a bucket-load of loot, Shadow Warrior 3 goes back to basics. Is it better for it? Some will certainly see it that way. It does mean it doesn’t have quite the same longevity, especially with co-op also cut out of the equation, but instead you’ve got a carefully crafted single-player journey full of intense combat encounters connected by surprisingly enjoyable bouts of platforming.

As ever, Lo Wang has his faithful katana at hand, allowing you to slice and dice any enemies that get a little too close for comfort. And accompanying the blade are six ranged weapons, ranging from the basic Outlaw pistol to the ninja star-spewing Shuriken Spitter. Each and every one of these weapons can be upgraded, too, adding additional effects like electrocuting enemies to popping their heads with explosives.

If seven weapons just isn’t enough for you, however, you’ll be glad to hear that you can acquire a select number of additional Gore Weapons. To get these, you need to engage with Shadow Warrior 3‘s new Finisher system, which allows you to instantly kill enemies when you fill either one or two bars of a gauge. Depending on the enemy you kill, you’ll acquire a different Gore Weapon. 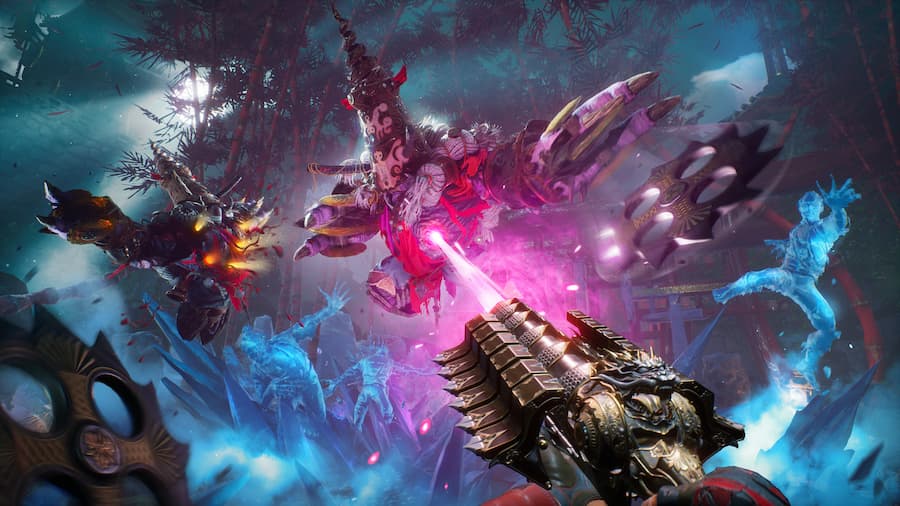 Some of these absurdly powerful weapons you can keep in your hands and use for a limited period of time, like the comical homing missile launcher you can pull out of a jack-in-the-box-like enemy. Others act more like grenades, freezing a group of enemies or unleashing a barrage of rotating lasers when thrown. Aside from being cool to use, they also add an element of strategy to the game: just what enemy is best to use a finisher on in any given situation?

The action in Shadow Warrior 3 is fast-paced and frenetic. You’ll run, slide, jump, double jump, dash, wall run and grapple your way from one combat area to the next. You’ll need to perform all of those actions during combat, too, in order to stay alive in the face of so many demonic adversaries. Making effective use of your arsenal is also a must, including your handy Chi Blast that often exposes key weaknesses.

Playing Shadow Warrior 3, we’re reminded of DOOM Eternal and Ghostrunner. Taking control of Lo Wang once again, you finally feel like you’re a ninja: the high-octane combat system demanding you keep on the move, while rewarding you with ammo, health and Finisher pickups for specific types of kills. Yet, it doesn’t feel derivative of them. Perhaps because of the exceedingly colourful visuals and crass humour.

Shadow Warrior 3 also sets itself apart via the many traps that litter its combat arenas. Clever players will use them to their advantage, triggering rotating blades and trap doors when possible to eliminate as many enemies as possible. It adds another element to combat as you dash around, thinning out enemy numbers. And you’ll find yourself needing to do that a lot, as Shadow Warrior 3 doesn’t hold back. 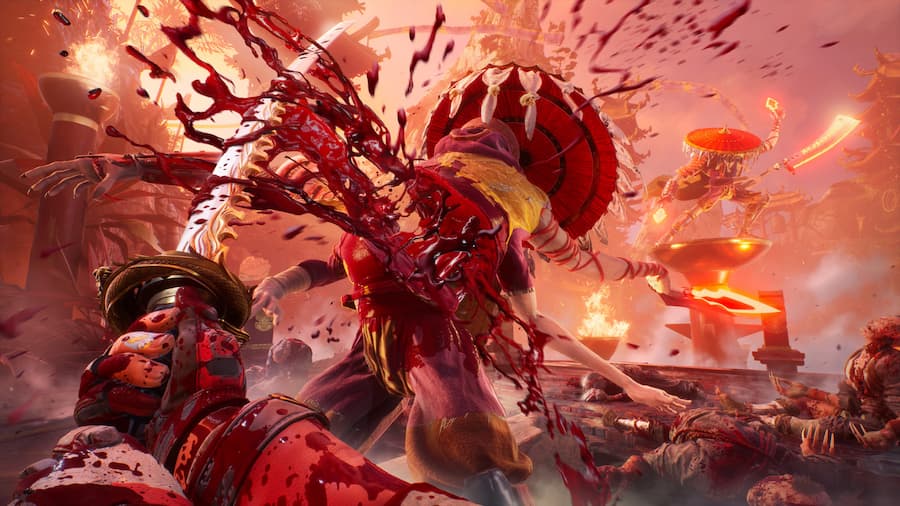 There’s a fantastic range of adversaries to overcome here, each and every one of them wonderfully realised. Though while character and enemy models looks great, it’s the environments that will really take your breath away. Just be warned that if you want all of the eye candy and the frames, you might have to make some compromises unless you’ve got a monstrous PC. Our RTX 3070 paired with a Ryzen 5 3600, for example, wasn’t enough to power the game at the highest settings and 1440p without bouts of slowdown and stutters. Although we found that performance notably increased when we disabled Nvidia Reflex. That’s no doubt a bug to be fixed.

Shadow Warrior 3 isn’t a very big game. It doesn’t really innovate, either, or let you breathe. But on the flipside of that, it’s focused, and doesn’t waste any of your time. You’re ushered from one combat encounter to another with a big smile on your face, the action never letting up, all the while bombarded with witty dialogue and visual gags that will genuinely make you chuckle. So, if that sounds like your idea of fun, jump right in. You won’t be disappointed.

This review of Shadow Warrior 3 is based on the PC version, with a code provided by the game’s publisher. It’s available on PS4, Xbox One and PC. 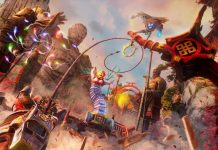 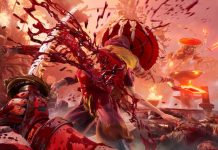