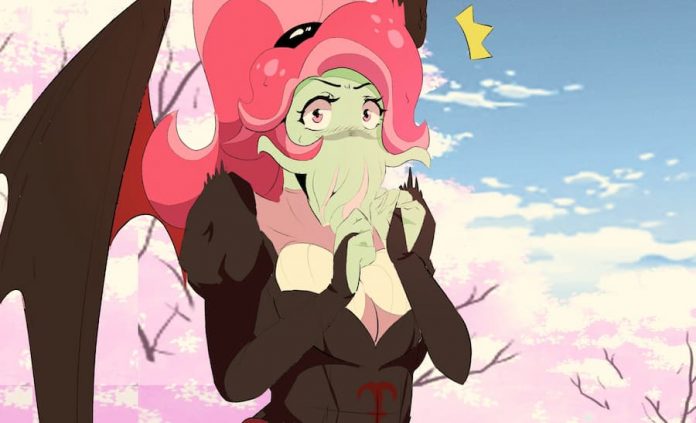 More than a visual novel, Sucker For Love: First Date is a cautionary tale.

Assuming the role of a man simply referred to as ‘Darling’, Sucker For Love: First Dates questions just how far you would go to smooch an eldritch horror. Darling is quite fond of them, apparently, going so far as to order an expensive Necronomicon off the internet to facilitate his dream of once again seeing a demon named Ln’eta.

When the book turns up, however, it’s not quite what he expected. It isn’t inked in human blood or bound by human flesh. Instead, it’s bound in Malibu pink leather and has pages gilded with gold. For a minute he thinks he’s been had, but then realises that perhaps there’s more to the book he’s received than it seems.

Books play a large role in Sucker For Love: First Date. In fact, they’re what drive the story forward. You see, with three eldritch horrors to win over with your adoration, you’ll need to peruse the pages of numerous books and perform the instructions laid out within. Take Ln’eta, for instance: to get the game going, you’ll first have to summon her by performing a ritual. The love pink Necronomicon you’ve just got your hands on tells you important information such as the required lighting and ceremonial attire. 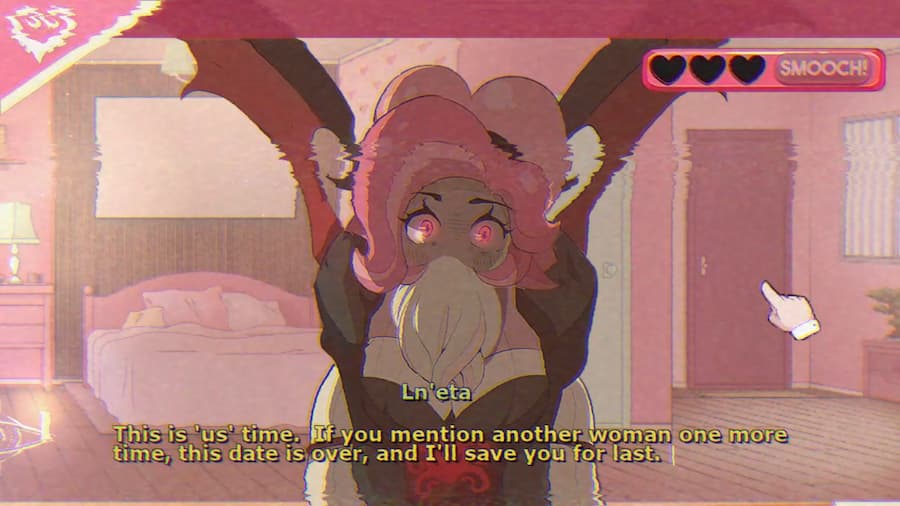 Much of Sucker For Love: First Dates, then, is spent looking at books, finding the correct pages, and then following the instructions. Upon completing your task, the story then proceeds forward. But like in many visual novels, there are often multiple paths to take. You don’t have to obey all of Ln’eta’s commands, for example, which may result in the story taking an unexpected turn.

If it isn’t already clear, while Sucker For Love: First Date is presented on the outside as a dating game, it really isn’t. Well, unless you want it to be. You can woo your new eldritch friends if you wish, ultimately completing Darling’s dream of smooching their faces. But if you want to reveal the game’s full story, you might want to approach each relationship with some apprehension.

Sucker For Love: First Date is perhaps best described as a comedy horror game. Its has some genuinely funny gags and some welcome pop culture references, yet it does also manage to be a little horrifying at times. Inexplicably, you might even find yourself warming to some of the eldritch horrors that you’re dating; they’re not all bad, after all.

For those who like short, quirky visual novels like Doki Doki Literature Club, Sucker For Love: First Date is a must-play. It’s equally dark, too. Though even those simply into all things Lovecraft ought to give it a try. As visuals novels go, it’s one of the most accessible and gameplay-driven. There’s also the fact that it’s rather cheap. And a free prelude is available, allowing you to at least try it at no cost. So, if you’re interested in what Sucker For Love: First Date offers in any way, you’ve got no excuse.

Sucker For Love: First Date is available on PC. Check out its Steam page. 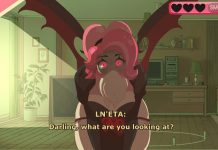