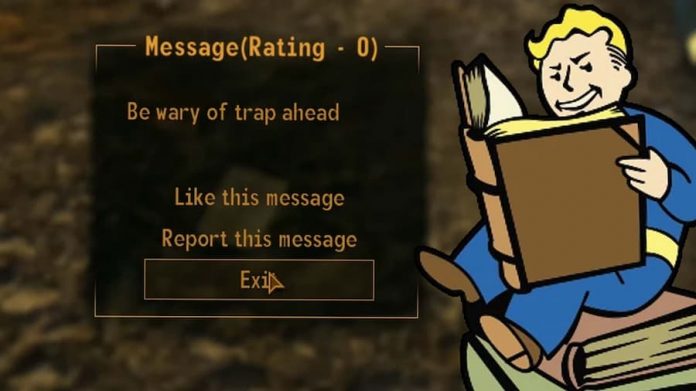 Sound familiar? It should. Elden Ring and other Souls games offer the same feature which, in turn, has lead to modder Tomminfinite creating this mod. As reported by PC Gamer, like Elden Ring you can create your own messages and leave them in the world, where they appear as a sheet of paper.

Then, other players can read the paper and, should they so choose, vote on whether the messages is helpful or not. Unlike Elden Ring, however, you’re not limited to specific words. Yes, you can write “Try finger but hole” if you really want, but you can write what you want. That’s the good news.

The bad news is that other players can write what they want, so you could stumble across some offensive or downright racist messages. There’s a reporting system but Elden Ring does make it harder to sneak rude messages in the game. Here, it’s open season.

We’ll just have to hope that there are more good people than bad playing Fallout: New Vegas. As for the mod, you can download it here but, as noted, you’ll require the JIP LN NVSE and SUP NVSE plugins. And a PC copy of Fallout: New Vegas, of course.