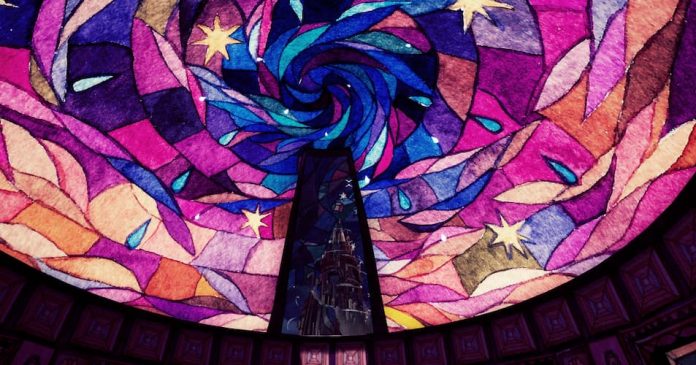 I’ve just played a 20-minute long demo for Flawless Abbey, an upcoming first-person puzzle adventure. I’m struggling to decipher what this game is about, but one thing is for sure: I’m desperate to try more.

After watching a short stage play with paper puppets being performed in front of me, I found myself on a train. Not your usual city hopper, though; looking out of the window, I seemed to be in the sky. Text from a disembodied voice appeared at the bottom of my screen, walking me through a few basic commands. Stand up, sit down, interact with an object. Soon, I had a puzzle thrust upon me. Here, take this card and figure out what it means. Flawless Abbey leans into its mysteriousness right from the get-go, it would seem.

The first puzzle of the game wasn’t too difficult, and I soon figured it out. It seemed the solution granted me access to outside the train – and it’s there, it seems, that Flawless Abbey‘s action truly begins. I’m told that I’m on a ‘Plunge’, some sort of journey through a mysterious place known as the Labyrinth Tower. Here, there’s an Abbess – the protector of the Tower – and I have to find her. I also have to find two other people who are in the same location as me. Why? I’m not sure. How? I’m also not sure.

Flawless Abbey plays its cards close to its chest, but it does so in such a way that makes you long to grab them out of its grasp, to find out everything that’s happening. You see, your surroundings are beautiful; it feels like moving through a stained glass window at times, with a rich palette of colours making an enchanting world. It begs to be explored, to be understood. And after just 20 minutes with the game, I didn’t get to do much of either – but it’s certainly left an impression on me.

It seems puzzles will be at the forefront of Flawless Abbey, many of them revolving around a mysterious ‘Star Key’. It’s the Abbess’ heart, you’re told. And it’s also a very important item that will let you ascend through the Labyrinth Tower. I wouldn’t expect this to be a linear journey, though. I’m expecting Flawless Abbey to offer me more questions than it does answers, but I think I’m okay with that. I just want to explore more of its fascinating rooms and begin to uncover its intriguing, mysterious story.

Flawless Abbey is coming soon to PC. Find out more from its Steam page – and add it to your Wishlist – by clicking here.