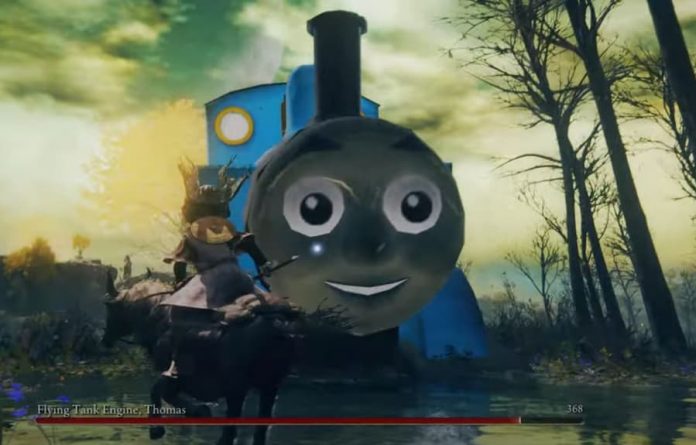 Thomas the Tank Engine has appeared in Elden Ring, thanks to the clever work of modders.

The one-minute video, uploaded to YouTube by Garden of Eyes yesterday, shows the a horseback hero engaging in a deadly battle with a ferocious boss… who just so happens to be a blue tank engine who goes by the name of Thomas.

A reskinned dragon, Thomas can fly and unleash a deadly fire breath from his smiley little face. He also seems to spend an awful lot of time crashed into a cliff in the video below.

This is, of course, not the first time Thomas the Tank has been modded into a video game. He’s a modder’s favourite, it seems, and Thomas has popped up in Resident Evil Village, Skyrim, Final Fantasy XV, Fallout 4, and just about any other game you can dare to imagine imagine.

See the childhood favourite train make his Elden Ring debut below. Be warned: you will get the Thomas the Tank Engine theme tune stuck in  your head all day after watching this video. Is it worth it? We think so.

With thanks to Garden of Eyes for sharing the video with us, and thanks to the modders who made this possible.