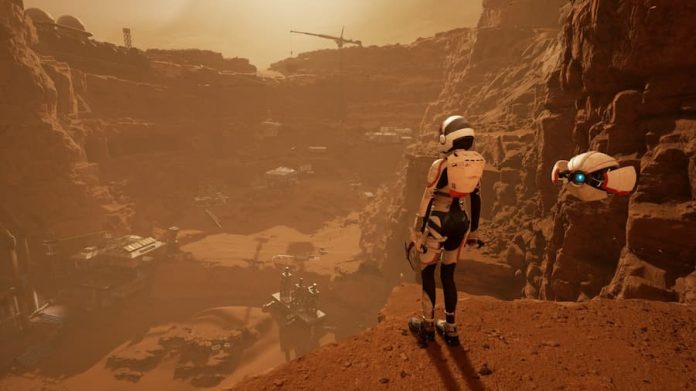 Deliver Us Mars is, despite the title, not a newsagent simulator sponsored by the titular chocolate bar, but a sci-fi adventure which takes you to the red planet.

It’s suprising, in fact, that the “tycoon” genre has neglected newsagents, given how many other ways corner shops try to make money. Is it worth signing up for a parcel franchise? Or will people just come in, drop their parcels off, then leave without buying anything?

None of those questions will be addressed by Deliver Us Mars but, given it’s the follow-up to the excellent Deliver Us the Moon, we’re still excited to get our hands on it. Developer KeokeN Interactive hasn’t revealed precisely what awaits you on Mars but they have released a teaser trailer (shown at the Future Games Show) which suggests your protagonist might be in a spot of trouble.

How so? Because in Deliver Us the Moon, while the Earth was in poor shape, you had a spaceship you could theoretically go back to. The trailer shows your (new) protagonist’s ship has crashed on Mars meaning unless you find another way off the planet (or some Total Recall-style way of terraforming the planet) you’re dead.

The trailer also features a helper drone, previously seen in Deliver Us the Moon, so you won’t be totally alone. Deliver Us Mars’s Steam store description does shed a little more light on things, stating that you’re on a “..mission to recover the ARK colony ships stolen by the mysterious Outward.” So it sounds like humanity, having wrecked the Earth, has decided to take to the stars in search of new planets to ruin.

Deliver Us Mars is set for an Xbox Series X|S, PlayStation 5, Xbox One, PlayStation 4 and PC release (via Steam and the Epic Games Store). There’s no release date as yet but publishers Frontier Foundry will be divulging more information over the coming months. In the meantime, you can check out the trailer above, or wishlist Deliver Us Mars on Steam.