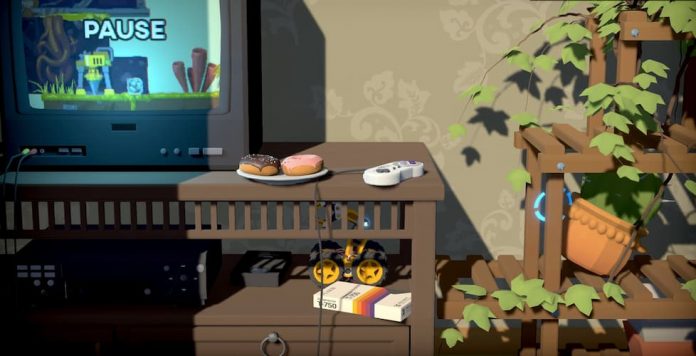 I didn’t expect a game where you play as a tiny four-wheeled robot to make me all emotional, but here we are.

Time Loader is surprising in several ways, not least because it has a touching story full of heart at the centre of it. It also revolves around time travel – which instantly throws it into unbelievable sci-fi territory, but that’s something I’m willing to forgive. Because ultimately, this short little platformer is very easy to love; it looks great, it’s fun to play, and its narrative will keep you playing until the end.

This is a game about a scientist who lost the use of his legs in an unfortunate accident when he was very little. As a result, he’s dedicated most of his life to developing time travel technology to allow him – or a robot programmed by him – to go back in time and stop the accident from ever happening. And that’s where you come in, to take control of the robot that’s sent back to the 1990s in order to stop a small boy falling from a roof. But if you’ve ever seen The Butterfly Effect, you’ll know that messing about with events in the past is never a smooth course. Changing one thing will most likely have unforeseen complications elsewhere.

And so, stopping the boy falling from the roof isn’t as easy as it should be. Just when you think you’ve done enough, you return to the present day to find an unrecognisable timeline, much more devastating than the one you came from. As a result, your time with Time Loader isn’t just spent changing the past; it’s also spent changing it back, fixing the mistakes you made the first time round.

What’s particularly cool is that Time Loader has multiple endings which can be unlocked by interacting with certain parts of the environment as you play. With the game split across three acts, something you fiddle with in Act One may change something in Act Two or Three. For example, exploring a little at the start of the game will uncover a safe code. It can’t be used right away, but if you make a note of it, it might just come in handy later on. Or how about a dying plant that you come across in the attic? Opening a window to give it some light might have an impact later on. Many of these things are easy to miss, but thanks to a chapter select option once you’ve finished the game, it’s worth going back to see how you can influence the passing of time. 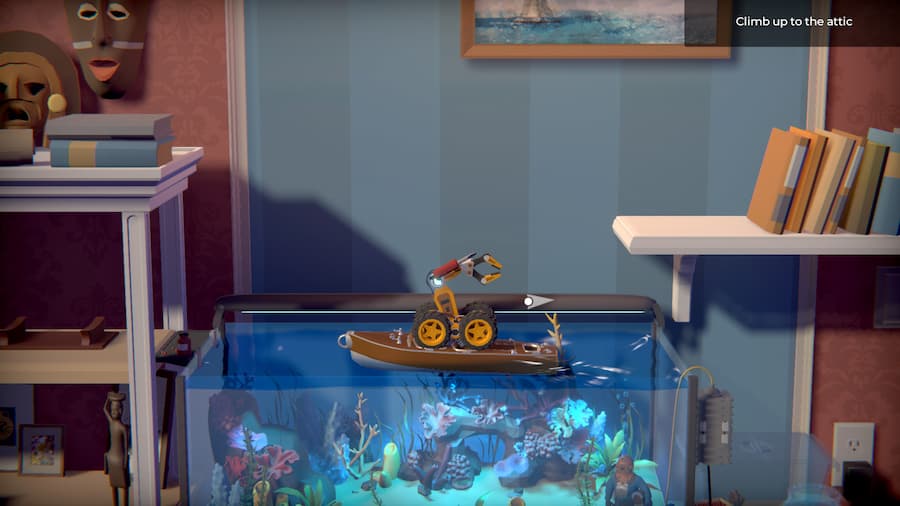 Of course, the most important part of a game is how well it plays, and thankfully, Time Loader‘s little robot is – mostly – a joy to control. You might find it a little unwieldy at the start, but once you get used to its nuances, it’s a pleasure to explore with. It’s rather versatile, with its four big wheels allowing it to jump and flip, making manoeuvring tight spaces and large gaps a cinch. You’ll collect upgrades for it along the way, too, such as a new suspension system which allows for even bigger jumps, and a winch system so it can swing across gaps. Exploration in Time Loader is mostly linear; this is a 2.5D adventure so you’ll either be travelling left or right. But sometimes its worth seeking out an alternative route, as you never know what secrets are waiting to be found.

It’s the little touches that really bring Time Loader to life. You’ll find yourself exploring just about every part of the house, whether that’s jumping on pots and pans in the kitchen, searching under a bed, or making your way up a reclining chair in the lounge. Everywhere has been brilliantly designed – this really feels like a home that’s been lived in, but one thing stands out more than anything else: the subtle audio design. The range of sounds your robot makes depending on what surface it’s travelling on really is wonderful; you can tell the difference between a metallic surface and a wooden surface, for example. It’s such a small thing, but one that makes a lot of difference.

For most of Time Loader, there’s no fail state; you can take things at your own pace, exploring as you see fit. Falling from a great height won’t kill you – your robot is more hardy than that – and there’s nothing out to get you, either. But towards the end of the game, the stakes change somewhat – and this is perhaps my only bugbear with the game. There’s a section which requires you to swing across a series of gaps, pressing buttons perfectly or else falling to your death. You’ll need to restart if you fail, which isn’t too much of a hardship, but it feels a little at odds with the rest of the game. 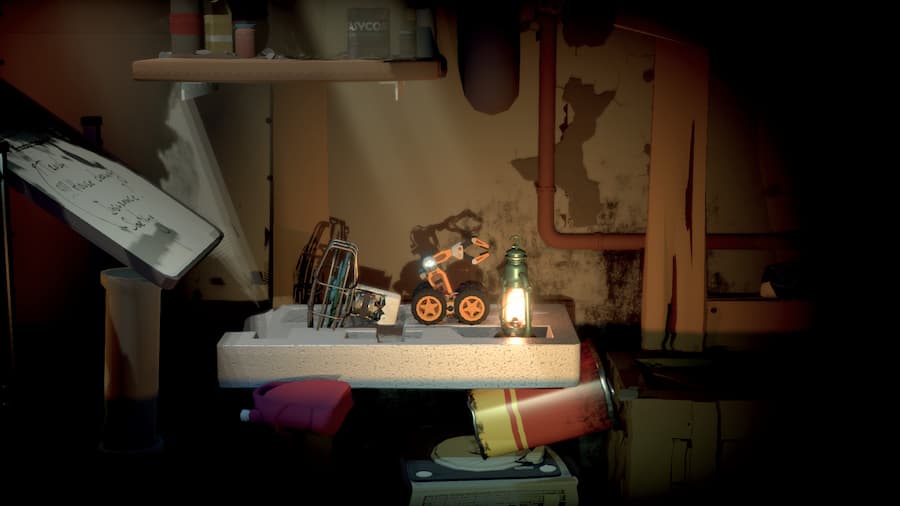 A couple of missteps aside, Time Loader is an enjoyable platformer with a surprisingly heart-felt story at its core. The backdrop of a house in the 1990s makes a wonderful playground for a tiny robot, and whether you’re whizzing over kitchen worktops, jumping over VCRs or rummaging through boxes of junk in a garage, it’s more entertaining than it has any right to be. It isn’t the longest game in the world – you’ll be done in three or four hours – but you’ll be captivated from start to finish thanks to the engaging gameplay and a narrative that begs for your attention.

This review of Time Loader is based on the PS4 version of the game, via a code provided by the publisher. It’s available on PS4, Xbox One, Switch and PC.