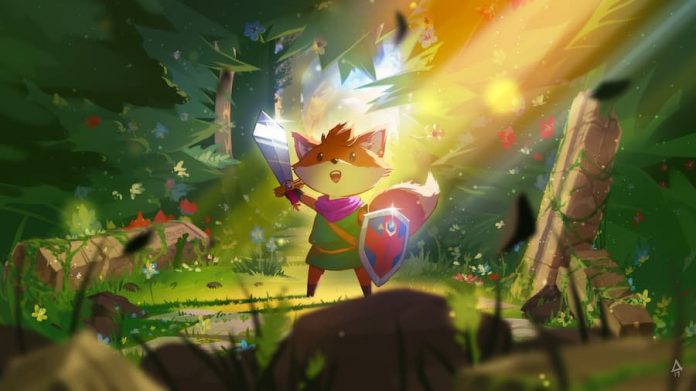 You awake on a beach, all alone, with nothing around you.

An island stretches out in front of you, but you don’t know where it is, or why you’re here. Pressing all of the buttons on your controller, you find that you can’t do anything except a dodge roll. And so you do what comes naturally to you: you start moving forward to explore the strange land you’ve found yourself in.

The first time you come across a sign, you can’t understand it. It’s in a strange language, made up of symbols you’ve never seen before. Huh. Perhaps you momentarily contemplate whether you’ve set the game in the wrong language, but bringing up the menu assures you that you’re playing in your mother tongue. It just seems that the mother tongue of the island you’re on doesn’t quite match your own. There’s a stick in a chest nearby; it’s not much, but a flashing icon on your screen prompts you to equip it. You can swing it like a sword. It’s enough to break through pots, so it’s probably enough to defend yourself with for now. Time to push on.

It’s not long before you come face to face with your first group of enemies. They’re easy; globular-type gooey things that you’ve fought in countless video games before. You know how to do this. Swing, swing your stick, and they’re dead. It feels good, but you’re also a bit uneasy. You know there’s more waiting for you, and this stick in your hand just isn’t going to be good enough. You need to find a sword and a shield.

This is Tunic, a game that purposefully obfuscates itself in order to push you to use your initiative, to explore, and to figure things out for yourself. It doesn’t, and will never, hand anything to you on a plate. If you like having your hand held while you play, Tunic isn’t for you. But if you thrive on a challenge, on slowly unravelling a world – and maybe ending up with more questions than answers – then by god, you should play Tunic. This beast has teeth far sharper than its cute aesthetic would have you believe; it’s designed to test you, to push your limits. But allow it to take a bite out of you and you’ll find yourself utterly entranced in a world that you simply have to explore. You have to. There’s no two ways about it. 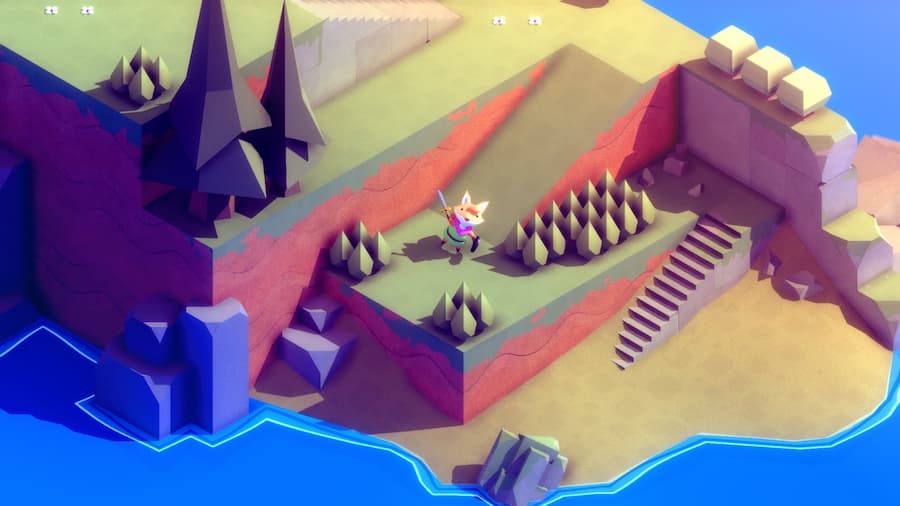 Tunic is like a lot of other games you’ve probably played before. It’s also like nothing you’ve ever played. There’s a hint of The Legend of Zelda here. It’s even perhaps a little Dark Souls-ish in design. But it also beats to its own drum, drawing influence from classic video games of the 90s. That’s most obvious when you flick through the pages of its manual. Yes, Tunic has a retro-styled video game manual. But you’ve got to find the pages first, scattered throughout the game’s world itself.

Sometimes those manual pages will help, but other times they may raise more questions. You can find a page with no context, speaking of an area you’ve yet to visit. Or perhaps it could give you the hint you’ve been needing. Much of it is printed in the mysterious language that you’ll encounter throughout the game, but illustrations and the odd word of English will provide important context. You’ll even spot little touches like hand-drawn notes and scribbles, as if this was a real instruction manual that’s been lovingly pawed over by past players.

You’ll likely refer to the manual time and again while you play, hoping that each time you open it up, it may make a little more sense to you. Eventually, most of it will. There are maps in there, that track your progress as you move through an area. If you can decipher them, there are even very handy clues as to what you need to do and where you need to go. Because Tunic will never tell you. You’re on your own here, and the only way you’re going to figure out your path is by exploring, seeing, doing, trying. 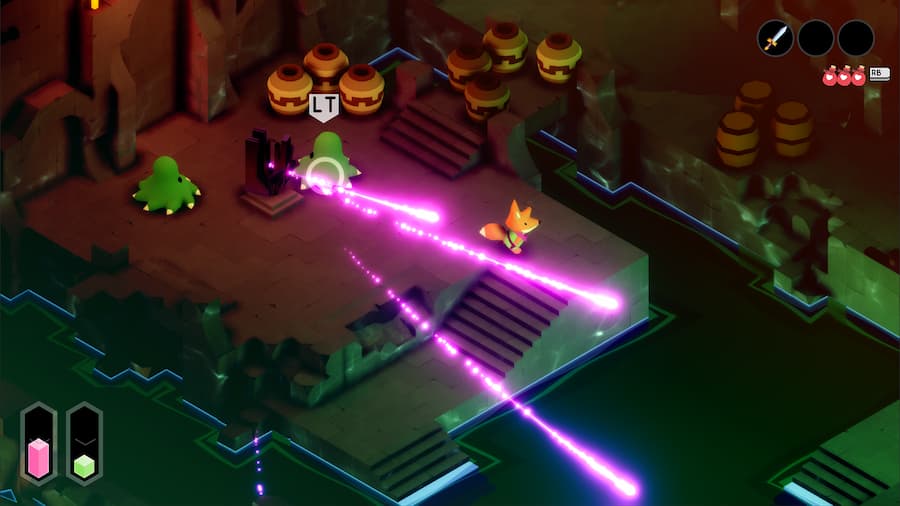 It’s a world packed full of secrets, and the first time you find one is always exciting. Perhaps it’s just a handy little shortcut, nestled out of sight behind a building or between the trees. Or maybe it’s a cave filled with useful treasure. Some of those secrets even break the fourth wall in a way, like a mysterious save file appearing on the ‘load’ screen that you absolutely did not put there yourself. Tunic is bursting with secrets and mysteries for you to discover, and so spending time exploring the world’s nooks and crannies often pays dividends. Most likely, though, you’ll have no choice but to poke around as you try to figure out just what it is you’re meant to be doing next.

You will probably come to the odd roadblock on your journey; it’s easy to miss a location you should’ve poked into. But uncovering a new path gives you a real sense of pride. Well, pride and trepidation, as you’re never going to be sure what’s waiting for you. Chances are, it might be death.

Tunic is hard. It will kick you to the ground and leave you dazed, wondering what just happened. Its combat is much tougher than a game fronted by an adorable fox would have you believe, and it’s here that it’s far more akin to Dark Souls than Zelda. Tunic eats Zelda for lunch then spits out the bones when it’s done. Defeating your enemies requires carefully-timed attacks, precise dodges and perfectly-landed blocks. Fail, and you’ll die, reviving at the last checkpoint you activated. Your ghost remains where you left it, hanging onto some of your possessions and waiting to be recovered. Those checkpoints will become your lifeblood, but they also come with a risk. Activate one, and your health will be refilled. But every enemy you’ve already slain will reappear. It’s a tricky risk versus reward, but sometimes you have no choice.

There is a way out, for those who want it. In Tunic‘s accessibility menu, you’ll find a “no fail mode”. Turning it on means that you can no longer die. It’s great that it’s there for those who want to experience Tunic but really cannot get to grips with the combat. But’s not the desired way to play. You’ll lose much of the experience, the struggle of overcoming obstacles, the heart of the journey. It’s a shame it’s all-or-nothing. A sliding difficulty scale would have been better. 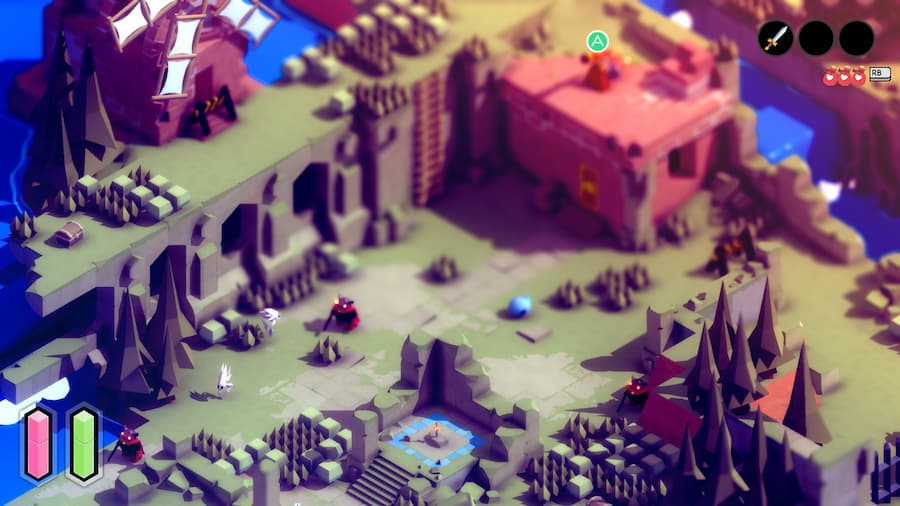 Even the best of you might be tempted to turn it on at some point. Tunic can quickly go from challenging but fair to absolutely brutal, particularly as you wander into an area filled with enemies and objects that not only damage you but also reduce your health bar to a slither. It’s easy to feel like you don’t stand a chance at times, and so perseverance is a must.

It’s absolutely worth it, though. Manage to get to grips with Tunic‘s combat and you’ll be duly rewarded with a gorgeous, engaging journey that will stay with you long after you’ve seen the credits roll. This is so expertly presented, so carefully crafted, with secrets scattered not just for the sake of it but thoughtfully placed to drip-feed you information at just the right time. The story at the heart of Tunic is deep, and the world that you’re a part of will constantly surprise you as you make your way through it. Every single thing in this game has a real purpose; nothing feels like filler or ‘extra’ content, and that’s quite a rarity these days.

At first glance, Tunic might look like your typical breezy indie adventure. How wrong you’d be to think that. Underneath its cute exterior lies a tough-as-nails experience, designed to truly test your mettle. But here’s a game that also sports some of the most thoughtful, wonderful design elements you’ll ever find, all laid out in an interconnected, sprawling world that begs to be explored. Better yet, a range of accessibility options mean that absolutely anyone can experience Tunic, regardless of their skill level. And by god, they should. It really is something special.

This review of Tunic is based on the PC version, via a code provided by the publisher. It’s available on Xbox One, Xbox Series X/S and PC. 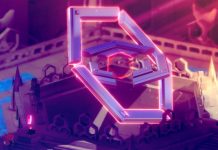 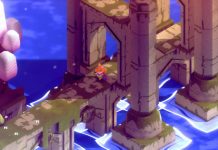 Can You Adjust the Difficulty in Tunic?

How Long Does it Take to Beat Tunic?