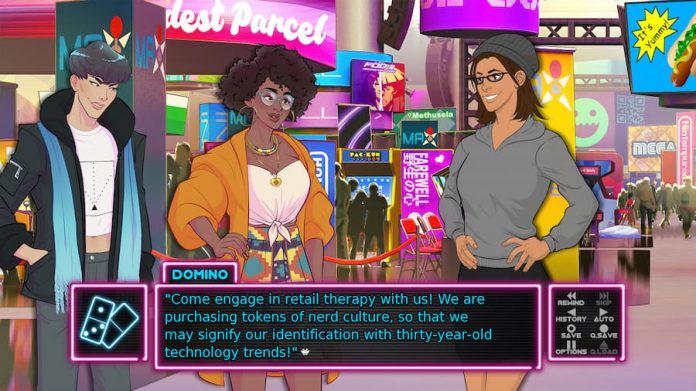 Arcade Spirits: The New Challengers is set for a May release date and we couldn’t be more excited.

Actually, that’s not entirely true. We’d be even more excited if there was a version that came with a giant cardboard replica of one of the in-game arcades but, while Funstock is handling the physical release of Arcade Spirits: The New Challengers, there’s no ridiculously expensive special edition available.

We reviewed, and loved, the original Arcade Spirits back in 2020, awarding it 8 out 10, though we did ding it for its sometimes inconsistence voice acting. But with the ever excellent Sungwon Cho – aka ProZD – involved we have our fingers crossed this sequel will remedy that.

Like the original, it’s a visual novel set in a world where arcades never went out of fashion. We would make a “What, you mean Japan?” joke but, sadly, it looks as if Japanese arcades are in a Coronavirus-assisted slump. You can date a wealth of different characters, including a non-binary character, though that’s not to say that Arcade Spirits: The New Challengers has to be a dating game, you can also focus on friendships.

Don’t count on seeing any official licensed arcade games in there, but if arcades, or the 80s, give you a warm and fuzzy feeling Arcade Spirits: The New Challengers could be right up your street. And if you finished the previous game, it’ll import your choices –  we’re particularly interested to see how it’ll handle your previous love interest.

You can check out the character trailer above, wishlist it on Steam, or pick it up on PC, PlayStation 5, PlayStation 4, Xbox Series S/X, Xbox One and Nintendo Switch this May 27th.