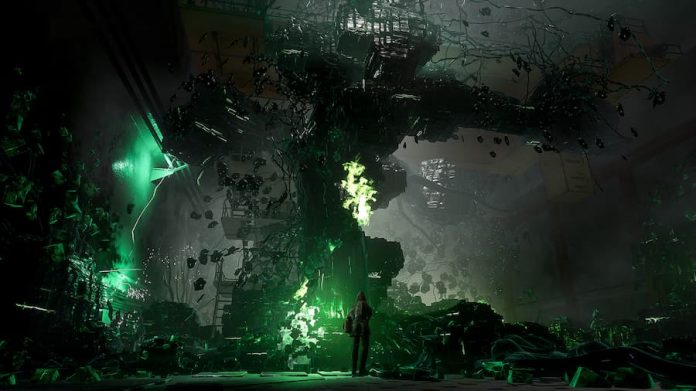 What would you do for love?

Igor would do a lot, it seems. As the main protagonist of Chernobylite, a single-player survival horror game by The Farm 51, he’s prepared to enter Chernobyl’s exclusion zone in order to search for his fiancé who went missing some 30 years prior. And as if that isn’t dangerous enough, it’s now occupied by hostile forces and hideous mutated creatures. Needless to say, the portal gun he’s created that allows him to warp from one place to another come in handy. That’s the benefit of being a scientist.

Chernobylite picks up with Igor and some hired help targeting the power plant at the centre of the exclusion zone – that’s where Igor believes Tatyana, his lost fiancé, will be. But things go horribly wrong, and so it’s back to the drawing board. Reuniting with just one of his mercenaries back at a run-down base of operations, it becomes clear that before they strike at the power plant again, they need to do some work. They need more men, more information, and more resources. And so your journey truly begins.

Each day, one mission can be selected from a list for you to undertake. You might decide to go scavenging for food, for example, or munitions. Some days, missions that drive the story forward will be available, too; Chernobylite is very story-focused, after all. Your companion doesn’t just have to sit at the base twiddling their thumbs while you’re gone, either. Each day you can assign them a mission as well, though like yourself, they might not always be successful in their task. As you play through the game you can unlock more companions, and even learn skills from them with skill points you’ve earned. 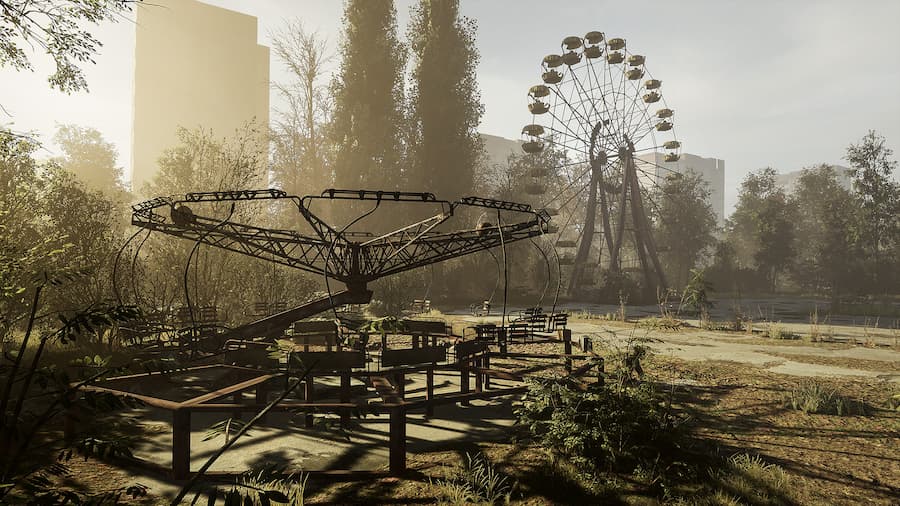 The gameplay itself is your typical first-person affair. Each mission will take you to one of numerous locations in the exclusion zone, and it’s up to you to safely make your way through it to your goal. Sometimes you might encounter ghastly creatures, other times  soldiers on patrol. It’s generally best to avoid combat where possible, which you can do by sneaking around or using stealth takedowns. Combat is sometimes inevitable, however, and so you’ll always want to make sure you’re carrying at least one gun, and preferably one that’s well maintained.

It’s nice that missions give you quite a lot of freedom. You can head straight to your goal if you want, or you can take some time to explore, find additional resources, and maybe discover the odd surprise. With our interest piqued by one building during a mission, for example, we found a soldier stuck in a crystalline growth on one of its walls. He asked if we could spare him a bullet so he could end his suffering, but instead we choose to try and find another way to help him. Searching the area we found a piece of Chernobylite, a powerful energy source, and upon picking it up the soldier was freed. He may have been our enemy, but he then promised to remember our face and help us in any way he can in the future. 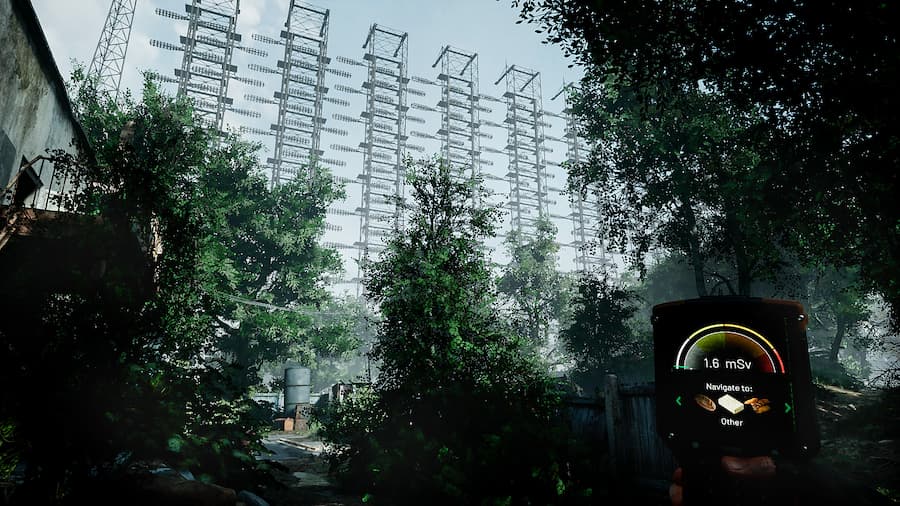 Once you’ve achieved your objective and are done exploring, returning to your base is as easy as equipping your portal gun from the inventory and using it. Upon returning, you’re able to see if your companions were also successful in their missions, then comes the act of rationing food. With it being scarce, important decisions must be made – if your companions aren’t well-fed their health will suffer and well as their morale. When times are good, however, and you have an abundance of food, you can give them extra rations to put them in a much more positive state of mind. There’s a lot to consider.

The happiness of your companions is also determined by the condition of your base. With just a press of a button you can enter base editor mode, allowing you to craft and place a wide range of objects. Many are functional, such as workbenches that allow you to craft smaller items and upgrade your weapons, while others are purely decorational, such as plants. In order to keep your team happy, however, you’re going to need to balance what you create, and transform your base into something that’s more welcoming and comfortable.

Ultimately, your goal in Chernobylite is to gather enough resources, manpower and information to finally be able to storm the power plant once again. And how long that takes will depend on your success within missions. Play on easy difficulty and you’ll pretty much be able to take on one story mission after another, speeding up the process. But on harder difficulties chances are you’ll have to complete side missions and get more involved with the game’s systems to keep your team operating at maximum efficiently. With that in mind, some may find the gameplay of Chernobylite eventually becoming a little repetitive – the missions all take place in a fairly small pool of locations, after all. Though at least they are somewhat dynamic, with your actions determining how many enemies are present and more.

Chernobylite‘s biggest issue is its English voice acting, which is consistently terrible. There’s an interesting story to unravel here, but it loses much of its effect thanks to poor delivery of lines and frequent translation issues. Do yourself a favour and stick with the default Russian voice acting with English subtitles. It offers a much more immersive experience overall. You might encounter some technical issues that sully your time with the game as well, though. We had to reload after a NPC failed to open a door for us like they should in the game’s opening sequence. And the game has a habit of freezing for a second when autosaving – awkward when it autosaves just as you take a shot to kill the final enemy in a group. 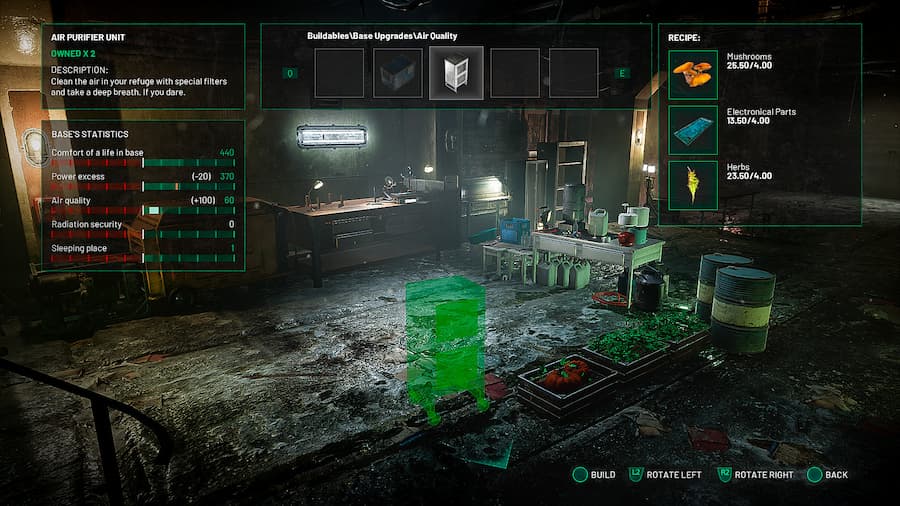 This new PS5 version of the game offers two graphical settings – one that enables all sorts of bells and whistles including ray-tracing, and one that’s focused on performance. We ultimately ended playing using the performance setting, as while Chernobylite looks great on its quality setting, playing at 30fps just doesn’t cut the mustard these days. It still looks rather nice in performance mode, too. There’s also decent DualSense support, but loading times are a little longer than you’d expect.

It’s not without its problems, then, but Chernobylite offers an intoxicating blend of horror, survival, base-building and FPS action. Repetition could be an issue for some, and shying away from playing with the poorly-acted English dialogue is highly recommended. Once you’ve settled in to your quest to find out what happened to your long-lost love, however, it’s hard to not feel the urge to do one more mission before turning it off, ever in the hope of finding valuable resources or a crumb of information.

This review of Chernobylite is based on the PS5 version, with a code provided by the game’s publisher. It’s available on PS4, PS5, Xbox One, Xbox Series X/S and PC.