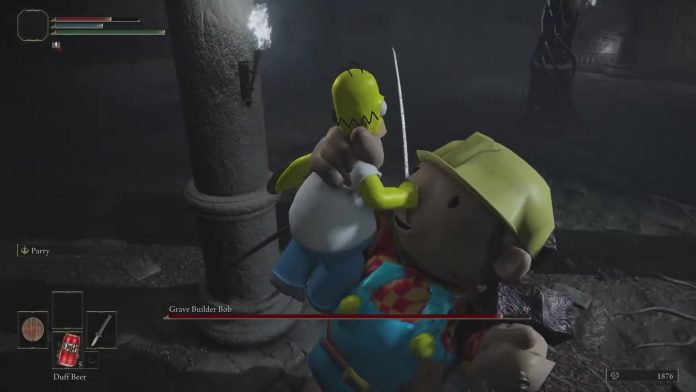 The “… but ruined by mods” series is back at it, this time turning Elden Ring into something that really has to be seen to be believed.

We’ve covered this YouTube series before, but we didn’t expect we’d get to see the channel’s creator, ToastedShoes, tackle FromSoftware’s latest. Why? Because it’s an absolutely enormous game and modding the hell out of it would take an age.

We suspect that ToastedShoes is just visting the areas he knows have been modded by Garden of Eyes, who supplied the mods for the game. We doubt that every single enemy in the whole game has been modded because they’re just too many. But the series, which has surely peaked with the third entry, is still absolutely amazing to watch.

The “Tarnished”, Elden Ring’s central character, is Homer Simpson and, roaming The Lands Between, he ends up fighting Minecraft slimes, Odie from Garfield, Wallace from Wallace and Gromit and so much more. But the absolute pinnacle of the video (third in this sub-series) has to be when Homer heads into Murkwater Catacombs.

Yes, seeing Margit as a massive Doge is fun, but we defy you to keep a straight face when you watch Homer take on a massive Bob the Builder, surely the battle of the century. You can check out the video above, or read our review of the original, unmodded Elden Ring here.