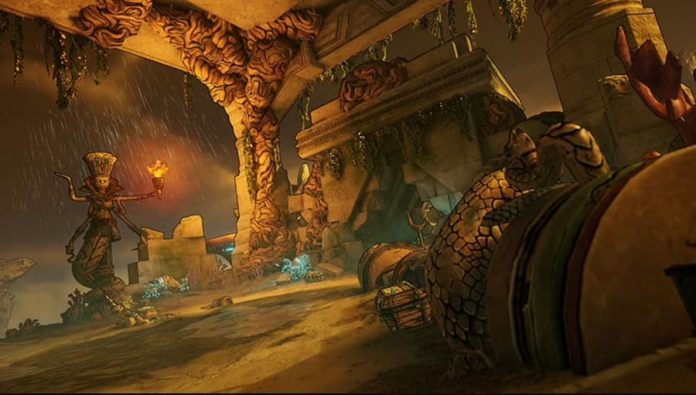 Are you wondering how to start Coiled Captors, the first piece of DLC for Tiny Tina’s Wonderlands? Here’s what you need to know.

If you’ve bought the season pass or the first piece of DLC for Tiny Tina’s Wonderlands, you’re probably itching to jump in. You might be expecting a new option to appear on the home screen, or perhaps you might expect a new quest to appear in your quest log. No such luck. To start Coiled Captors, you need to visit a new area that’s appeared on the Overworld. Don’t worry – we’ll tell you how to find it.

To start Coiled Captors in Tiny Tina’s Wonderlands, first head to the Overworld. You can fast travel there from anywhere by heading into your menu and toggling across to the map. Once you’re on the Overworld, you want to head back to your starting location. Just outside of Brighthoof and near the first shrine you activated, you’ll see a brand new house has appeared. It’s called Dreamveil Overlook.

Enter Dreamveil Overlook, and there you’ll find everything encompassed in the Coiled Captors DLC. Upon entering the new location, you’ll be given a short quest to familiarise yourself with the location. After that, you’re on your own.

There are two main points of interest here: the Wheel of Fate, which can be spun by spending a unique type of currency to get random loot, and the Mirror of Mystery. By entering the mirror, you’ll find the main bulk of the Coiled Captors DLC: a short series of enemy encounters which eventually lead to a boss fight with Chums.

How to unlock further levels in Coiled Captors DLC

To begin with, you’ll only be able to access Level 1 of the Chums encounter. But over time, three more levels will unlock, providing access to different, more deadly forms of the final boss. These unlock at the rate of once a week, as follows: