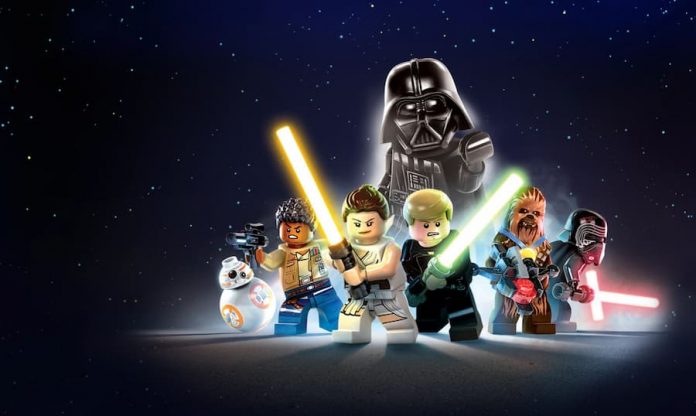 After three long years of waiting, a new LEGO game from Traveller’s Tales is finally here. It’s certainly bigger than ever before – but is it better? Yes, mostly.

The last LEGO title from TT Games was back in 2019: The LEGO Movie 2 Videogame. Before then, it wasn’t unusual to get multiple games from the company in one year. And so, three years of drought has been a long time. The result, though, is LEGO Star Wars: The Skywalker Saga, a brick-built take on all nine mainline Star Wars movies. This is far removed from 2005’s LEGO Star Wars: The Video Game, thanks to full voice acting, gorgeous visuals and more in-depth gameplay. But at its core it’s still very much the type of LEGO game we know and love: running around and destroying stuff.

LEGO Star Wars: The Skywalker Saga is broken up into nine separate entry points, one for each movie. You can start from the beginning of any trilogy, so you can jump in at Episode 1, Episode IV or Episode VII. To unlock the rest of the trilogy, you’ll need to first play through the first episode, however. They’re not exactly separate games, because once you’re in free play, the entire Star Wars galaxy is yours for the taking; as long as you’ve unlocked an area by playing through it in story mode, you can visit it whenever you want.

And you will want to. Like the most recent LEGO games before it, LEGO Star Wars: The Skywalker Saga gives you plenty to do within the framework of an episode, but it’s outside of this where you’ll discover most of the game’s secrets and unlock everything there is to be found. By exploring the world in free play, you’ll find new characters, uncover blue bricks which can be used to purchase upgrades, and find tokens to unlock those classic LEGO ‘cheats’ such as x2 studs, etc.

There’s a lot here that will be familiar to anyone who’s played a LEGO game from Traveller’s Tales before, but it all feels somewhat newer and shinier. Visually, The Skywalker Saga looks stunning; backdrops often look photorealistic, and the detailing on minifigures and LEGO bricks is sublime. If you get the right angle, you can see the ‘©LEGO’ printed onto each brick, and get close enough to a minifigure and you can see the subtle plastic joins of their production process. If you’re a fan of real-life LEGO bricks, you’ll get a huge kick of seeing them digitised in so much beautiful detail. 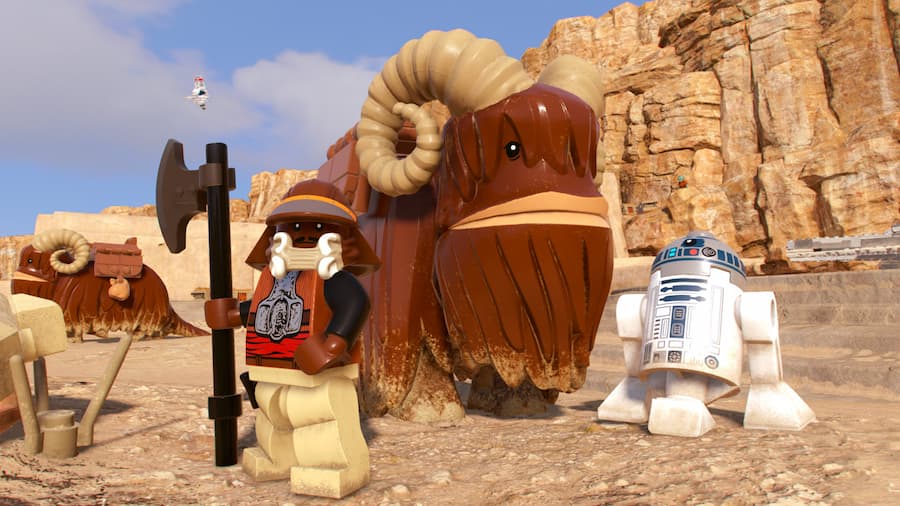 Everything feels a little more cinematic than it has done before, too. Of course LEGO Star Wars: The Skywalker Saga is injected with the silly humour that TT Games is known for,  but overall there’s a great deal of loyalty to the Star Wars franchise here. You’ll play through iconic scenes interspersed with wonderfully-animated cutscenes, and it makes for an absorbing experience.

Or at least, it does in single player. When we tried The Skywalker Saga in split screen co-op, we found that often, the action was somewhat stymied by the added cinematics. For instance, the action of one player can trigger a cutscene, completely interrupting whatever the other player was doing. And on one occasion, a key scene was cut off mid-way through as one player was simply transported elsewhere. It’s a shame, because LEGO games have always thrived on co-operative play. In free-play, it’s great. But if you truly want to get the most out of the story here, we’d perhaps recommend you first play through it by yourself. 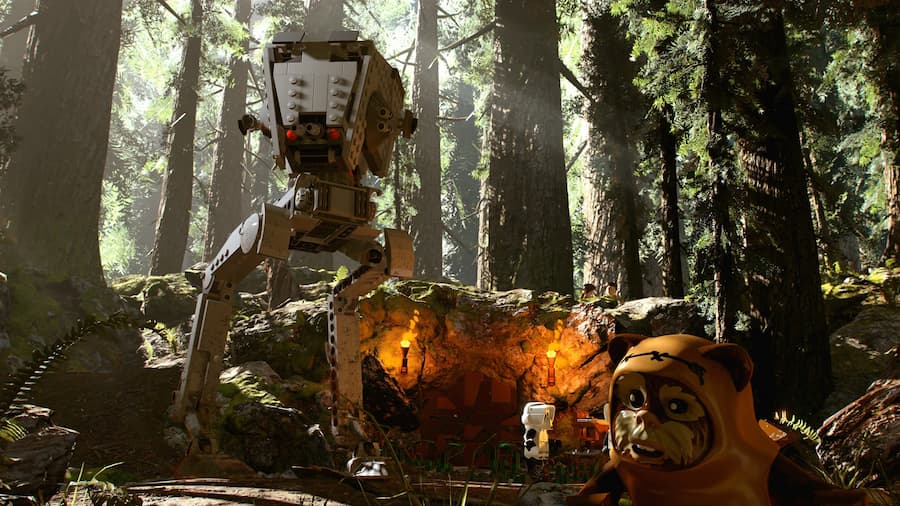 That’s unfortunately not the only gripe we have with LEGO Star Wars: The Skywalker Saga. We’ve encountered a fair share of bugs that we can only hope will be ironed out in patches sooner rather than later. Once, on trying to start a mission, we were met with a black screen that forced us to restart the game. And in Episode One, the entire action-packed fight against Darth Maul was out of focus. A bizarre and rather frustrating bug, considering it should have been quite the showpiece.

In the grand scheme of things, though, these issues have been easy to forgive and forget. The vast majority of our time with the game has been problem-free. This is a huge game; the scale of it is rather quite overwhelming. There’s over 20 planets in total, and each one can be explored, with collectibles to find and side quests to engage in. As you’d expect, there’s a wealth of environmental puzzles to be completed, requiring you to use your noggin – and the right combination of characters and abilities – to solve. For those who simply want to enjoy the story and leave it there, great; there’s a good 20 hours of gameplay, and nothing else will feel necessary or forced upon you. But for those who want it, you can easily spend triple that time simply exploring everything The Skywalker Saga‘s full world has to offer. 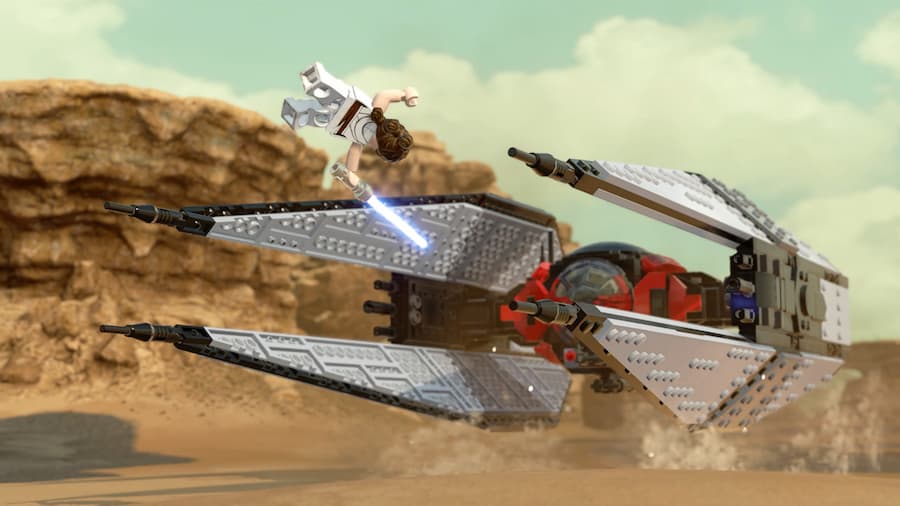 Related: The Best Star Wars Games of All Time

We should also mention that LEGO Star Wars: The Skywalker Saga places greater emphasis on flying than earlier games. Indeed, practically every episode has a level or two dedicated to piloting a spacecraft, be it the Millennium Falcon or an X-Wing. You’ll be required to shoot down enemies, or aim at targets on a larger ship, while avoiding incoming fire yourself. These sections are rather thrilling – particularly those that act as set pieces, such as the iconic trench run that’s been carefully recreated here. And, outside of the story, open space acts essentially as its own hub world; you can fast travel to planets if you want, or you can also fly yourself there. It’s worth spending some time flying around space, because you’ll find additional collectibles out there, as well as random battles to engage in and side missions to pick up.

Its gameplay may not be quite the evolution from previous LEGO games that you were expecting, but it’s clear TT Games has put a lot of time and love into making LEGO Star Wars: The Skywalker Saga. It’s the biggest LEGO game yet by a mile, and the shift to making it more cinematic makes it perhaps the most engaging. It’s certainly a huge improvement in terms of visuals; this really is a gorgeous-looking game on PS5. A few bugs may let it down somewhat, but they’re easy to forgive and forget. Ultimately, whether you’re a Star Wars fan or a LEGO fan – or even better, both – you’re going to find a lot to love here.

This review of LEGO Star Wars: The Skywalker Saga is based on the PS5 version of the game, via a code provided by the publisher. It’s available on PS4, PS5, Xbox One, Xbox Series X/S, Switch and PC.