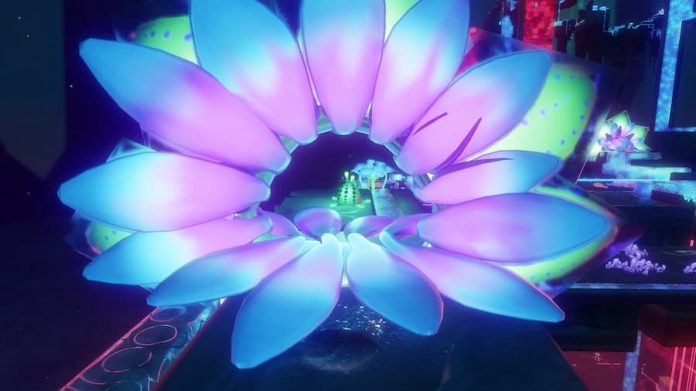 If you’re a fan of puzzles, then Lumote: The Mastermote Chronicles is worth a look. As long as you don’t mind treading the same ground again and again.

Putting you in control of a squishy, gooey Mote, Lumote: The Mastermote Chronicles tasks you with fixing the flow of energy through the ‘Great Depths’ – a vast underwater world that is currently out of balance. To fix things, your Mote will need to interact with the environment, manipulating the movement of flora in order to get where you need to go.

Making your way through the first few levels of Lumote is a rather satisfying experience. Controlling your Mote is pleasant enough, and having full 360-degree over the camera leaves you feeling fully in charge of your surroundings. The puzzles themselves start out fairly enjoyable, too. Moving your Mote around affects different parts of the environment: standing on a patch of flowers can make them grow or shrink, for example. And you’ll need to jump on blocks and take control of them in order to move them around.

One neat feature is that the entirety of Lumote: The Mastermote Chronicles takes place in one huge, interconnected world. Look down and all around you, and you’ll see future levels awaiting; all coloured in red waiting for you to turn them blue as you fix their energy flow. It’s pretty cool to look at – if not a little overwhelming. When you’re struggling to figure out your current puzzle, it can be rather daunting to know so much still awaits you. 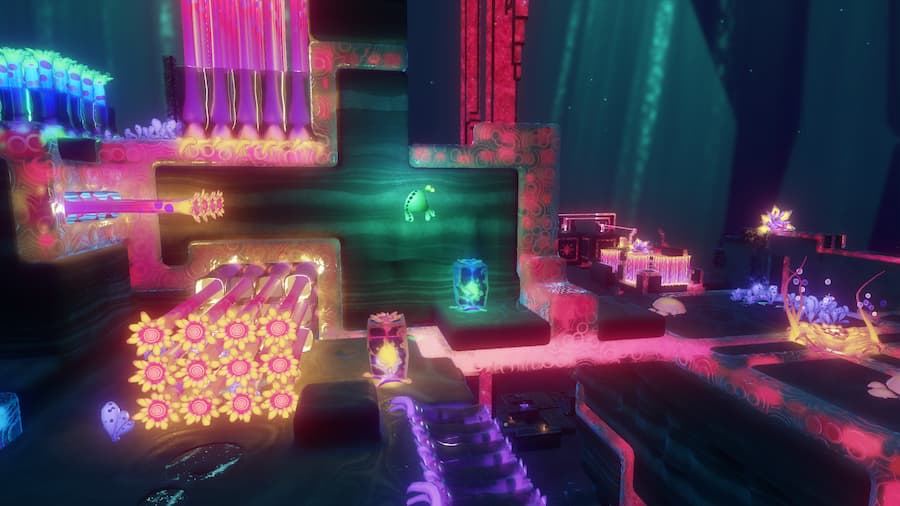 The problem is that after just a small amount of time with Lumote, you’ve seen pretty much all it has to offer. Sure, its puzzles gradually get more complex – but the setting never changes, nor does the basic concept of the puzzles. You already know that, since you can see everything mapped out in front of you. It means it gets tiresome rather quickly.

The visuals and sound design also leave something to be desired. This isn’t the nicest looking game. Its palette of glowing red and blue hues may be eye-catching but it’s not all that inspired, and with that design never changing or evolving, you’ll soon get fed up of looking at the same thing. More egregious is its sound design. The ‘bleeps’ and ‘bloops’ of your Mote and the world around it are not as adorable and emotive as the game’s description wants you to think. Instead, they’re irritating and grating. 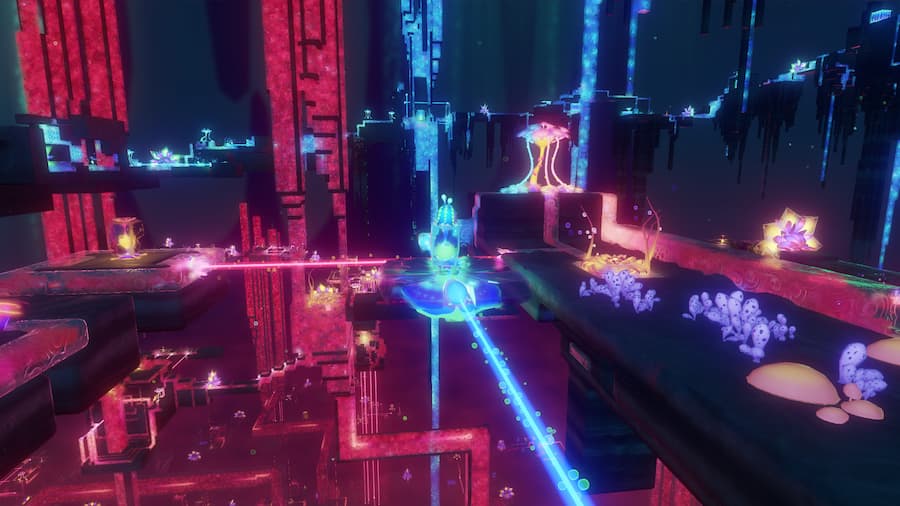 It’s not all bad, though. Although repetitive, Lumote: The Mastermote Chronicles’ puzzles are clever, and do truly put your skills to the test. Mechanics continually evolve as you progress through the game, with slightly different elements being introduced along the way. While early levels simply require you to move a block or two, later on you’ll be jumping on moving platforms, controlling jellyfish-type light sources and more. You’ll typically need to influence the environment in more ways than one before finally solving a puzzle – and if you’re not normally a lover of puzzles, you can expect to get stumped quite regularly.

If you thrive on completing puzzles, you’ll likely get a kick out of working your way through each of Lumote: The Mastermote Chronicles’ levels. But be prepared for plenty of repetition in both puzzle design and the environment around you. For most players, it’s likely boredom is going to set in long before you reach the end.

This review of Lumote: The Mastermote Chronicles is based on the PS4 version (played on PS5), with a code provided by the game’s publisher. It’s available on PS4, Xbox One, Switch and PC. 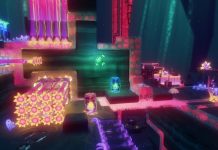