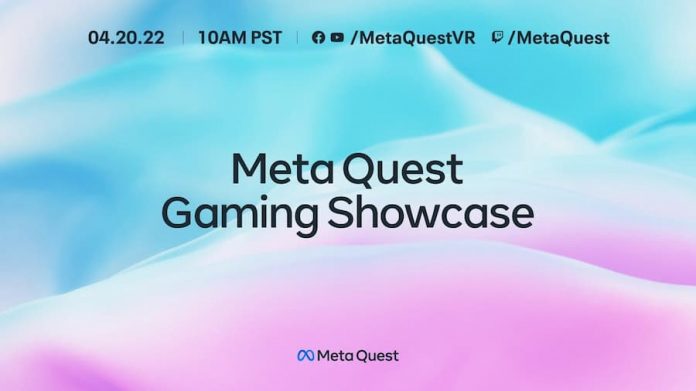 Did you miss out on yesterday’s Meta Quest Gaming Showcase? Don’t worry, we’ve got you covered.

Oculus now comes under the Meta brand as part of Facebook’s big new “metaverse” strategy, so Meta Quest is the new name for the Oculus Quest. Yes, Oculus sounded much, much cooler, even if it was also that movie where Amy Pond fought a mirror.

Last night’s showcase was Meta’s chance to show off its upcoming Meta Quest 2 games; a mixture of previously unseen titles and others which we already knew were in the works. It was a digital-only event presented by Ruth Bram, Meta’s Executive Producer though, despite Facebook/Meta’s Metaverse push, she was very much flesh and blood, green-screened into the event.

So what was on show? We’ll start with the evening’s biggest reveal…

The Meta Quest Gaming Showcase concluded with an unsettling, otherworldly presence materialising on stage. Once Mark Zuckerberg was done talking, we got to see the trailer for Ghostbusters VR which, though it supports up to four players, is unconnected to the recently announced Ghostbusters: Spirits Unleashed.

It’s being developed by nDreams and, while the trailer was suitably eerie and was rendered in-engine, it wasn’t actual gameplay footage. It’s not the first attempt at a Ghostbusters VR game – Ghostbusters is Hiring was released in 2018 and was widely panned, so hopefully nDreams can deliver something that lives up to the licence.

Ghostbusters VR will support solo play, though it’s not clear whether you’ll be going it alone or if you’ll be supported by bots, as was the case in the Ghostbusters: The Video Game.  Ghostbusters VR, coming to Quest 2 and Rift, has no release window as yet but you can find out more at nDreams website.

A follow-up to Boneworks, Bonelab will see you causing mayhem with a wide variety of weapons. Yes, the story is that you’re escaping a lab complex but if you’ve played Boneworks you’ll have an idea of the kind of gruesome shenanigans you can expect. Bonelab is coming to Quest and Rift later this year.

Another new announcement, this VR American Football game has the potential to be just as bone-crunching as Bonelab. It’s set to arrive on Quest but there’s no release date as yet.

There’s a 99.99% chance you’re aware of social-deduction game Among Us. Even if you’ve never played it you’ve probably seen the toys gracing supermarket shelves. This VR version, announced earlier this year, looks as if it could be even more chaotic than the PC, console and mobile versions. It’ll arrive on Quest and Rift before the year’s out.

The follow-up to cold-war sci-fi adventure Red Matter, Red Matter 2 is set to resolve the previous game’s cliffhanger and should be longer and more ambitious than the previous title, which was criticised by some for being too short. There’s no release date as yet but updates are promised for later this year.

Spy sequel Espire 2 is coming to Quest this year, giving you the choice of blasting your way through your enemies or sneaking around them. It’ll also support co-op, letting you work your way through the Espire’s locations with a partner which, absolutely, definitely will not lead to any relationship-destroying arguments.

Moss’s rodent hero, Quill, is on her way back! Actually, they’re already here, since Moss: Book II has launched on the PlayStation VR, but we were happy to learn it’s also coming to Quest 2 this Summer. We loved the original Moss, and with PlayStation VR 2 in the works, releasing it on the original PSVR seemed like a strange move that could cost it players.

A VR JRPG? Count us in. Admittedly, RUINSMAGUS (yes, those capitals are compulsory) could go wrong between now and its Quest 2 release later this year, but we have our fingers crossed.

Cities VR is.. out this April 28th? Yes, that’s right, of all the titles announced at the showcase, this city builder is the one you hardly have to wait for. Arriving next week on Quest 2 it’ll let you build your city from a God’s-eye view but also afford you a closer look at your budding metropolis.

And that’s every game that was shown off at the Meta Quest Gaming Showcase. On top of that, Resident Evil 4 VR has now received the free “Mercenaries” mode. We’re excited for Ghostbusters VR and Moss: Book II, though there should be plenty here to take your fancy. Just don’t blame us when you try to put your controllers down on a table that isn’t really there.