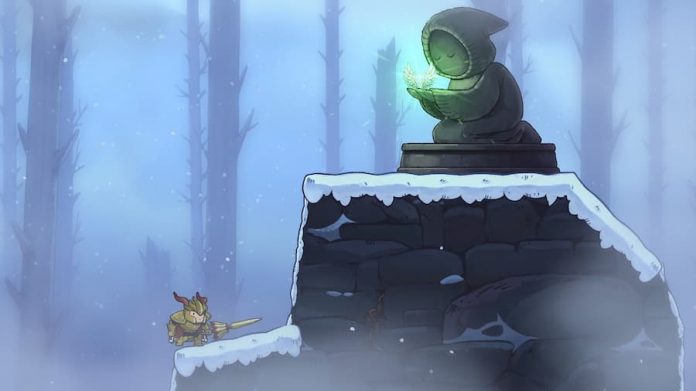 Released way back in 2013, Rogue Legacy could perhaps be credited as one of the games that made the roguelike genre popular.

Indeed, alongside The Binding of Isaac, Rogue Legacy is one of the earliest roguelikes I can recall playing. Continually making your way through a procedurally-generated castle, your goal was to get as far as you can, killing as many enemies as possible – and hopefully defeating a handful of bosses. When you eventually died – which was inevitable – you’d start again with a heir, a member of your progeny, and you’d be able to use any coins you’d collected to purchase permanent upgrades.

Now, Rogue Legacy has a heir of its own. Rogue Legacy 2 feels like an evolution in just about every sense of the word. Its predecessors’ pixelated visuals have been replaced with clean, modern 2D visuals, and its basic mechanics have been bolstered with more bells and whistles. There are more character classes, more traits, new elements, and bigger and more interesting procedurally-generated areas to explore. But there’s no mistaking: this is very much Rogue Legacy. And that’s definitely for the better, not for the worse.

It’s rather simple, really: if you enjoyed Rogue Legacy, you’re going to enjoy Rogue Legacy 2. Developer Cellar Door Games has done an excellent job of keeping the game’s charm in tact while expanding and improving in just about every way. For the most part, it works. And so if you obsessively poured dozens of hours into Rogue Legacy back in 2013, get ready to do the same again here.

One of Rogue Legacy‘s most unique features was that every character you played as had their own ‘trait’. Your character might have been a giant, towering over most of their enemies. Or they might have been colourblind, meaning the game would be presented to you in black and white. Rogue Legacy 2 brings the trait system back, but with more of them than ever. You’d typically come across the same traits every couple of runs previously; in Rogue Legacy 2 we’ve gone through over 50 members of our progeny and rarely have they been repeated. Perhaps your character is vegan, meaning meat – which usually heals – will do them damage. Or they’re a pacifist, so they simply refuse to attack enemies. Maybe they’re a little self-centred, so a spotlight remains on them at all times, or perhaps they suffer from terrible IBS and fart a lot. What? Nobody said Rogue Legacy 2 took itself too seriously. 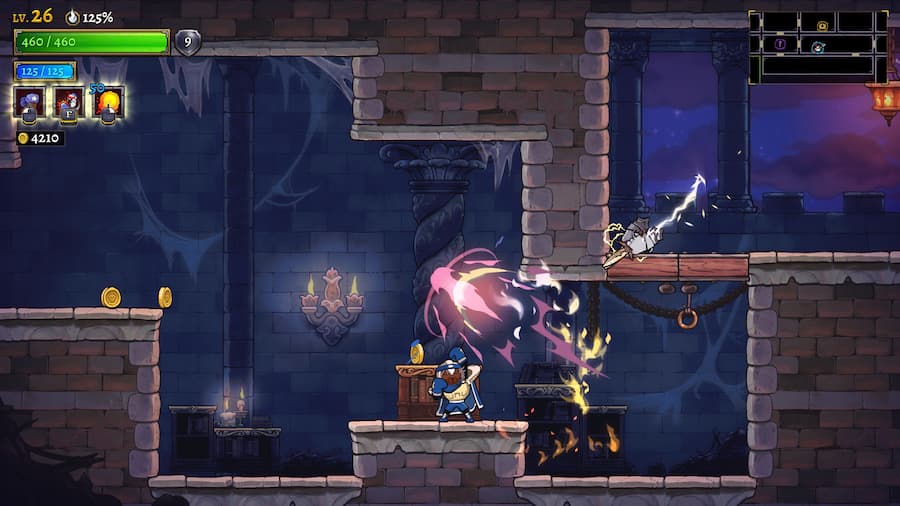 There’s much more to do in Rogue Legacy 2, too. Ultimately, the goal remains the same: make your way through the procedurally-generated castle, killing bosses for each area as you go. But while the first game gave you the freedom to wander into more difficult zones if you wanted, Rogue Legacy 2 wants you to complete them in order. You can’t simply head into a new area, as each one of them requires a special item first. And getting those items – which essentially act as a permanent upgrade – typically means completing a challenge.

The first of these challenges enhances your dash mechanic, allowing you to do it in mid-air. And so to unlock it, you’ll need to prove yourself by completing a platforming-based trial that revolves around the upgraded dash. Another challenge unlocks the ability to talk to ‘spirits’ that you’ll encounter as you play, which often have useful information. Others improve your moveset, eventually allowing you to progress further through the game. 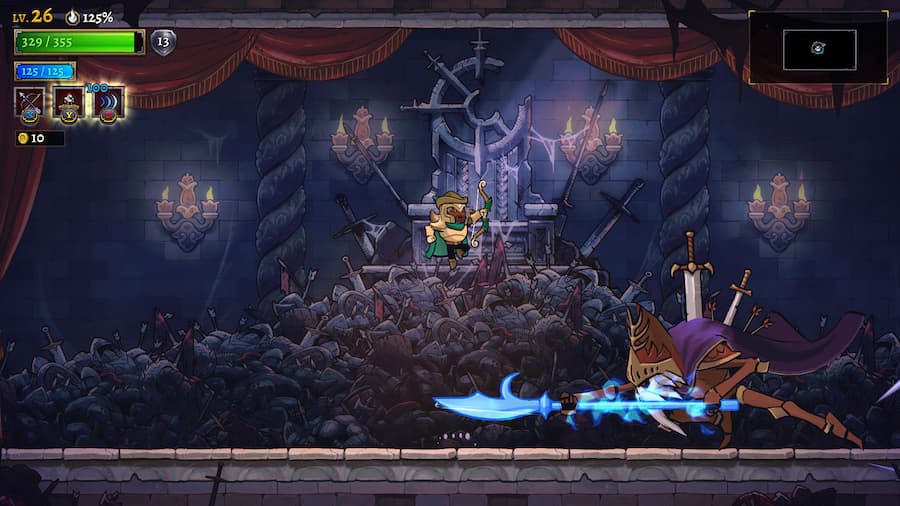 Outside of the castle and in between runs, you’ll find plenty more to do. An upgrade tree remains, bigger than ever, allowing you to improve HP, attack, magic power and more. And the blacksmith and enchantress return, where you can unlock and equip better weapons and interesting charms to help you on your run. But there’s more. The town you find yourself in before entering the castle continually expands. Eventually, you’ll find new merchants, new characters to talk to, and even a new set of trials to take part in. All of it comes together to make Rogue Legacy 2 a much bigger, broader experience than its predecessor.

Perhaps most of note, though, is the fact that Rogue Legacy 2 has more character classes. The Knight, Barbarian, Mage and Assassin make a return, of course, but they’re accompanied by the Bard, the Gunslinger, the Boxer and the, er, Chef, amongst others. Each one has a unique combat style and can vastly change how the game feels. The Gunslinger, for example, replaces melee attacks with guns, meaning you can attack quickly from range – but you’ll need to ensure your guns are reloaded regularly, leaving you vulnerable for a few seconds. The boxer forgoes a weapon and instead uses their fists, pummelling enemies and sending them flying into others. You’ll undoubtedly find your favourites, but all classes are worth trying. 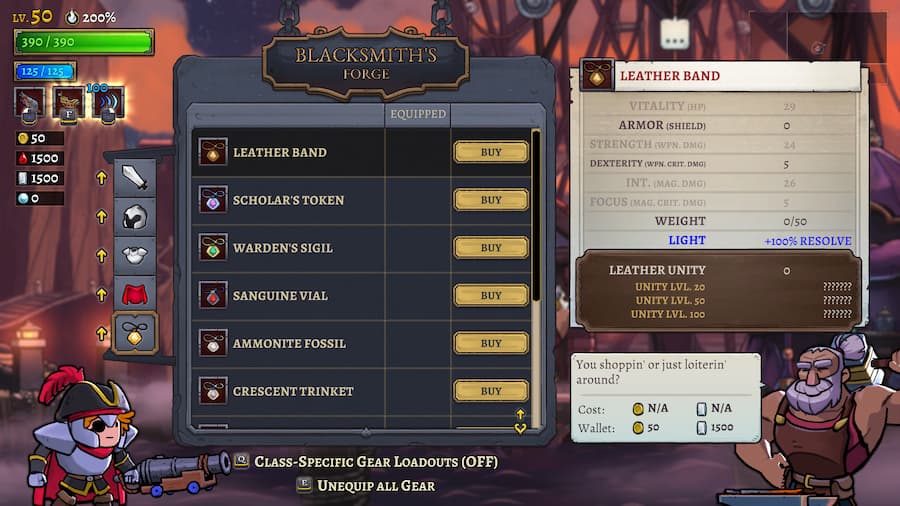 A few new in-game mechanics further enhance Rogue Legacy 2 from its predecessor. A new down-kick, which can be used to bounce off certain objects, allows for more challenging traversal. And you’ll also find strange portals within rooms, which can transport you from one area to another via a pipe. Again, these are used to make traversal a little more complex, adding a new layer of challenge to the proceedings. Rogue Legacy 2 isn’t necessarily harder than the first Rogue Legacy – they’re both tough-as-nails – but there’s certainly more challenge in the platforming elements this time around. It’s not all about combat.

It’s impossible to be disappointed with Rogue Legacy 2. As a sequel, it does everything it should: keep the spirit of the original in tact, while bolstering the experience with new content. Bigger and more interesting areas to explore mean you’ll be battling your way through Rogue Legacy 2 for much longer, and the new suite of character classes makes it more interesting than ever. Add to the mix new challenges, more complex traversal mechanics and more ways than ever to upgrade your character, and you’ve got a winning formula.

This review of Rogue Legacy 2 is based on the Xbox Series X version of the game, via a code provided by the publisher. It’s available on Xbox One, Xbox Series X/S and PC.