Trek to Yomi, a samurai slash-em-up from the maker of the Shadow Warrior trilogy, is set to arrive in May.

Paying tribute to the black and white samurai movies of old, Trek to Yomi sees you seeking vengeance after your village is attacked by bandits. At least, that’s how the game kicks off – don’t be surprised if it turns out that this was more than just a simple bandit attack. Revenge is rarely simple, especially where samurai cinema is concerned.

Unlike Ghost of Tsushima, which also casts you as a vengeful samurai, Trek to Yomi’s action is side-on and, stripped of side-quests and open-world roaming, you can concentrate on dispatching your foes. We went hands on with the game last month and came away suitably impressed, stating that it could deliver “…the authentic interactive samurai movie experience many have been craving.”

Now it’s set for a May 5th release and, to whet your appetite for its arrival, developer Flying Wild Hog and publisher Devolver Digital have released an extended fifteen minute trailer. Granted, we’ve seen several trailers so far but this really shows off how gorgeous the game looks in action.

If you’ve a love of old black-and-white samurai movies or if you just want a little moody slash-em-up action, you can get your hands on Trek to Yomi when it launches May 5th on PS4, PS5, Xbox One, Xbox Series X/S and PC. 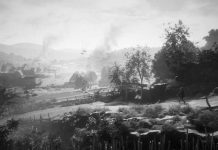