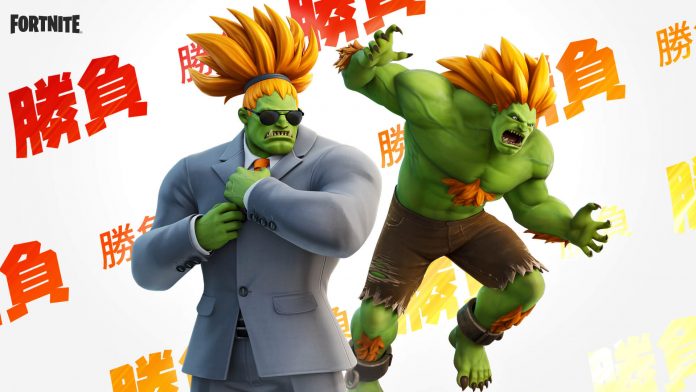 After recruiting Chun-Li and Ryu, Fortnite is getting another two Street Fighter brawlers; Sakura and Blanka.

As of tomorrow, April 28th, you’ll be able to purchase costumes that will transform your character into either of the two fighters. Can you fling fireballs? Unfortunately not – next to none of Fortnite’s guest characters retain their powers, which is a shame as it would really mix things up.

However, if you’re a Street Fighter fan then you may appreciate the opportunity, even if you have to pay for it, to run around, shooting people in the face dressed as bottom-kicking schoolgirl Sakura or electrically-powered Blanka. Oh, and making them do the “Get Schwiffy” dance, too.

That, at least, is what we’d be saying if it wasn’t for one “minor” detail. Blanka can wear a suit and it is absolutely, utterly awesome. Yes, the green-skinned, head-biting beast-man who usually runs around, Hulk style, in a pair of shorts, can be put into a business suit.

Taking a break from the crane game, @StreetFighter's World Warriors Blanka and Sakura are coming to fight.

Read about their two Tournaments that are happening, including a mobile-only Tournament!

Sure, you can participate in the Blanka & Sakura Cup tomorrow, but we absolutely can’t overstate just how much Blanka rocks this suit. Sure, he doesn’t have Mayor Mike Haggar’s braces, as seen in Final Fight, but it’s still an awesome, awesome look. We have our fingers crossed that Capcom adds this look to Street Fighter VI, because it’d be a crime not to.

These costumes, as well as the Blanka and Sakura Cup, will arrive in Fortnite tomorrow, April 28th. You can find out more here.