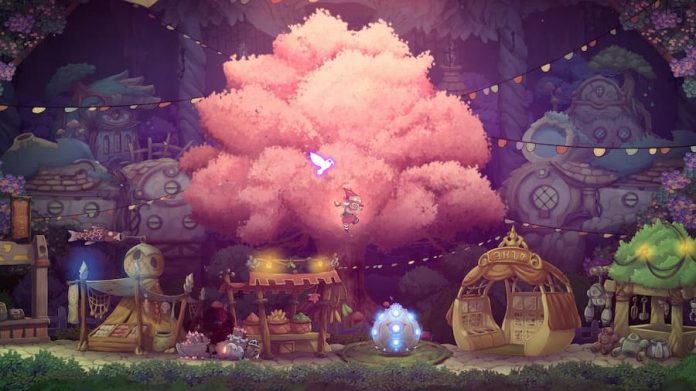 Like metroidvania games? Team17 has a new one for you, coming later this year: The Knight Witch.

Announced today, UK-based publisher Team17 has teamed up with Super Awesome Hyper Dimensional Mega Team to publish its upcoming title, The Knight Witch. Combining metroidvania-style exploration, bullet hell shoot ’em up sensibilities and a deck-building system, it wants to wear several hats at once – but judging by the trailer (which you can watch below), it wears them very well indeed.

You’ll take on the role of the titular Knight Witch, a girl named Rayne tasked with saving her once-peaceful kingdom. The world of Dungeonidas has fallen to a terrible army of golems, and it’s up to you to bring it back to its former glory.

As Rayne, you’ll collect cards to learn new spells, which can be upgraded and improved as you play. Different spells act in different ways, allowing players to customise their loadout and playstyle to suit. And, judging by the trailer, The Knight Witch‘s world looks to be a beautiful backdrop worth exploring. We’re digging the art style, and can’t wait to see more.

The Knight Witch doesn’t have a release date just yet, but it’ll be coming to PS4, PS5, Xbox One, Xbox Series X/S, Switch and PC later this year. We’ll have more information as it becomes available. In the meantime, give the trailer a look below:

You can also wishlist The Knight Witch on Steam.