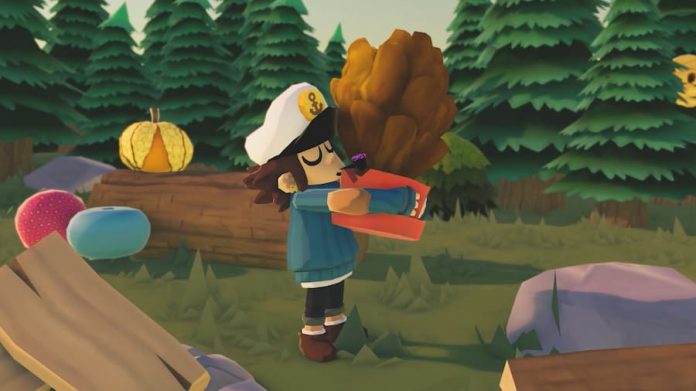 Do you ever get the sense that you’re only there to serve other people?

In video games, I mean. Because after spending an hour with Time on Frog Island, an adorable open adventure game from Half Past Yellow, I can’t shake that feeling. Sure, the frogs of Frog Island seem like a lovely bunch, and I’m happy to help them, but why does nobody ever just want to help me without anything in return?

You see, your boat has just washed ashore on the mysterious but whimsical Frog Island. An island that, unsurprisingly enough, is inhabited by frogs. Your boat is utterly wrecked, and you’re going to need to fix it before you have any hope of getting back home, wherever home may be. And some of the frogs you meet will help you – but you’re going to have to help them first. They’ll either need something fetching in return, or a lost item retrieving, or something delivering.

Time on Frog Island doesn’t give you any directives. The island is yours to explore and uncover at your own pace. Just across from where you’ve washed up you’ll find an artist, and a little further down the beach you’ll find a herd of sheep-like creatures. Elsewhere, there’s a small town, a blacksmith, a fisherman. You can’t walk far without discovering something here, and almost everything raises a question.

Without any dialogue – written or spoken – in Time on Frog Island, characters communicate with you via picture-laden speech bubbles. It’s a little cryptic, but eventually you’ll recognise something. Someone has lost a dog – and maybe you’ve seen that dog somewhere on the island! And someone else has a problem with crows attacking their crops – their scarecrows need heads. Explore enough and you’re sure to find something that’ll do the job.

The great thing is that you can take everything at your own pace. Travel in any direction and you’ll find something interesting – whether or not it’s what you were actually looking for in the first place. This is a game about discovery, and the fact that you’re never led by the hand is freeing. Even if you may occasionally get lost trying to find your way back to a useful item that you stumbled upon earlier.

This is wholesome gaming at its finest, and I can’t wait to see what else Time on Frog Island has in store. Free of any violence or conflict, this is a game simply about exploring, making your own path, and helping others. What could be finer than that?