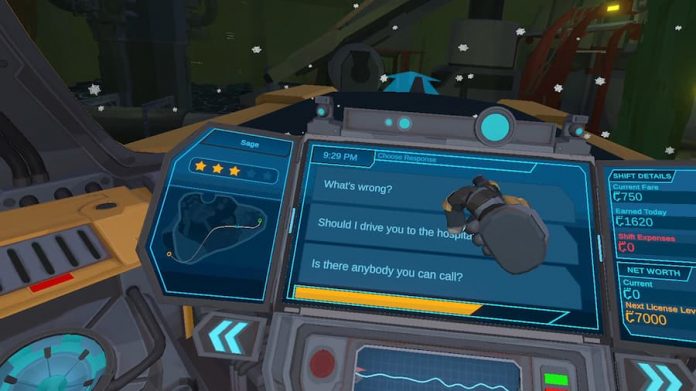 Can you drive a flying taxi? If you’ve played Cloudpunk, the answer is yes, but The Last Taxi takes things a little further.

The two titles both take place in Blade Runner style city, where traffic taxes to the skies. But what has us intrigued, apart from the fact that it’s a VR, is that The Last Taxi gives you some moral dilemmas to deal with. After a passenger expires and leaves an unregistered baby in your cab you’ve got to two mouths to feed (apparently pitching it through someone else’s open window isn’t an option).

So, aside from not slamming into buildings and other cards, you have to decide just what you’re willing to do to make cash. 80-odd NPCs will clamber into your cab and they won’t all just need dropping off at the mall. On top of that, you can invest your ill-ish gotten gains into upgrading your cab, including some upgrades that may also be legally suspect. The reason you’re The Last Taxi is that, with robots in charge, you’re all but surplus to requirements.

Does that sound like your idea of fun? You won’t have to wait long to get your hands on it either, since it’s arriving on the Oculus/Meta Rift and, via Steam VR, the HTC Vive this May 31st. There’s no news of an Oculus/Meta Quest release as yet but we have our fingers crossed. In the meantime, you can wishlist The Last Taxi on Steam here.

Maybe if we put the baby in a PlayStation 5 box, that’d make someone else take it home.