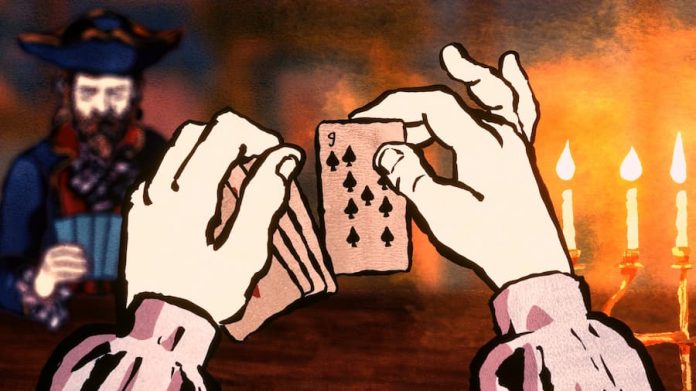 No, this isn’t about learning the rules, playing a hand and hoping you win. This is about bending the rules, manipulating a hand and knowing you’ll win. Set in 18th century France, Card Shark is a game that teaches you real-world sleight of hand techniques and asks you to perform them while playing cards with the rich and wealthy. Maybe it’s corrupt, but you need money. And they have too much. So what’s the problem?

After ending up on the road with a professional scammer, you’ll become his wingman of sorts, aiding him in his gambling scams. Not every trick you pull off is going to be identical, of course, so you’re going to need to learn – and memorise – different techniques. There’s over 20 altogether, but mastering them does leave you feeling like a true card shark. Maybe you’ll need to signal to your partner by pouring wine in his glass in a certain way, or cleaning the table in a certain direction. Or maybe you’ll need to split a deck in just the right way so he’ll get the perfect hand of cards.

Every move takes practice to pull off, and just one finger wrong will either get you caught or lose you the game. You’re probably going to need a notebook at the side of you as you try to memorise everything; while the game’s UI gives you some pointers, a lot of it is down to you. You’ll need to remember if a signal for hearts is a clockwise wipe of the table or an up-and-down motion, for example. And you’ll need to remember which direction to push your d-pad to drop, shuffle or ‘injog’ a card – all very important manoeuvres when it comes to preparing a deck.

Card Shark is tense, and its stakes feel pretty high. Of course, this isn’t real life, but it puts more onus on you, the player, than many other games do. You don’t simply need to do as the game tells you; you need to learn it, remember it, and perfectly pull it off. The benefit to doing so? Many of the techniques used here are real. Practice in real life, then, and you could soon be impressing your friends with your nifty card tricks. It’s like a secret window into the Magician’s Circle, teaching you the basics of real card magicians. It’s not exactly David Blaine stuff, of course, but it’s a start. And it’s thrilling. 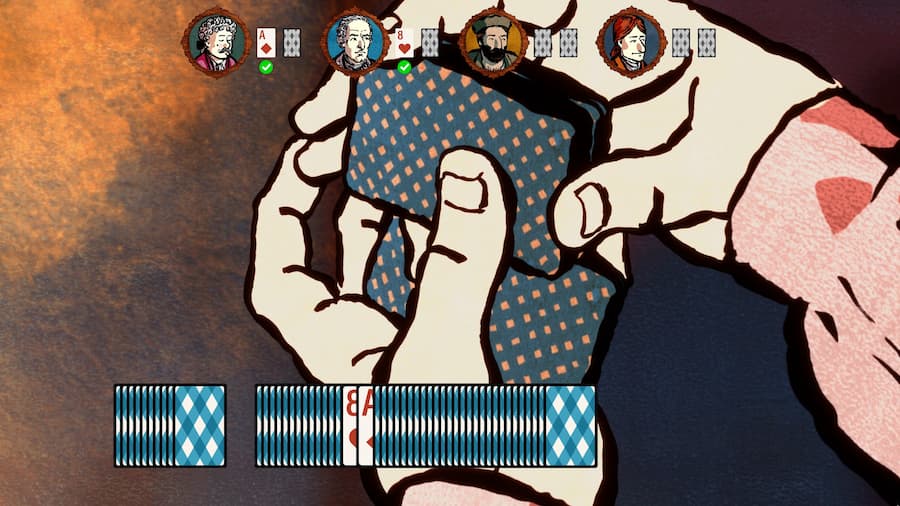 Everything is presented in a gorgeous, purposefully rough 2D art style. Colours and lines are bold and eye-catching, and it’s accompanied by a suitably classic soundtrack to set the scene of France in the 1700s. As you play, you’ll be able to choose from a number of locations to visit, each with its own colourful characters to meet. Some of them might catch you out on your cheating instantly, loving the fact that you’re so brazen and talented. Others might be suspicious, calling you out if you take slightly too long to shuffle or deal. Sometimes there’s a high price to pay – death, even – and if you’re playing on the hardest difficulty, that can mean a permanent game over.

But even on the easiest difficulty, where failing isn’t quite so easy and death isn’t permanent, Card Shark remains a game that requires your full concentration. You can’t take your eyes off the screen, because you might miss that all-important glimpse of your opponent’s card. And hesitating for just a moment while dealing a hand is all it takes to make other players suspicious. Being cool and collected is the key to succeeding in Card Shark. That, and memorising each move perfectly. It feels like hard work to begin with, but nailing them all leaves you feeling like a true badass.

We can’t wait to try our hand at more Card Shark; not only to learn more sleight of hand but to also see where the story goes. It may be the card tricks that are keeping us glued to the screen, but the tale of debauchery amongst 18th century France’s most elite citizens has piqued our interest too. Its release date isn’t set, but it’s coming to PC and Switch soon.