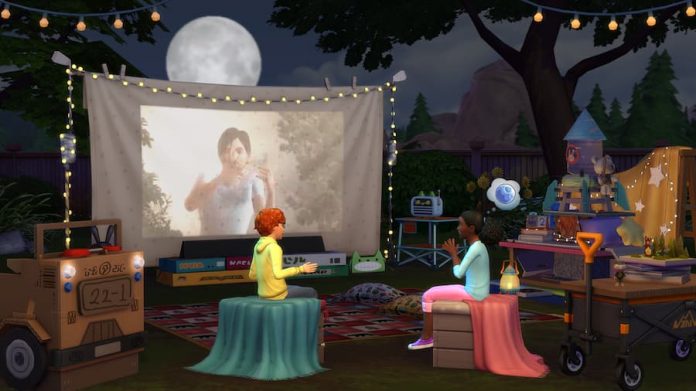 The Sims 4 Little Campers Kit is either a sneaky way of introducing werewolves to the life-sim, or Maxis and EA are just trolling the hell out of us.

It’s one of two kits arriving next week on PC and consoles; the other is The Sims 4 Moonlight Chic Kit, which, despite the name, is a pack of fashion items inspired by Parisian creator Paola Locatelli. At least, that’s what EA says it is, though calling it “Moonlight Chic” has us raising an eyebrow and reaching for our lycanthrope repellent.

However, it’s the The Sims 4 Little Campers Kit that we strongly suspect adds werewolves to The Sims 4. And if you’re thinking that werewolves are kind of a weird addition for a life-sim, The Sims 4 already has vampires and werewolves have figured into previous entries in the series. Then there’s this teasing Tweet.

Except.. that sim on the right seems to have the full moon on her mind. And then there’s the press release, which says, and we quote, “Simmers can seize the night with new content that encourages them to explore the fun when the sun goes down, and transform into new and exciting versions of themselves.”

Whether out on the town💃or enjoying time in your backyard⛺️ spend the night under the stars with the new The Sims 4 #MoonlightChicKit or The Sims 4 #LittleCampersKit! 😎 pic.twitter.com/PHodTSdDpY

There’s a third game pack arriving in June (all kits and packs require the base game), so it may be that’s the one that introduces werewolves and that EA is indeed trolling us. But if you do pick up The Sims 4 Little Campers Kit when it arrives (alongside the The Sims 4 Moonlight Chic Kit) this May 26th, you might want to make sure your sim is wearing their finest silver jewellery.