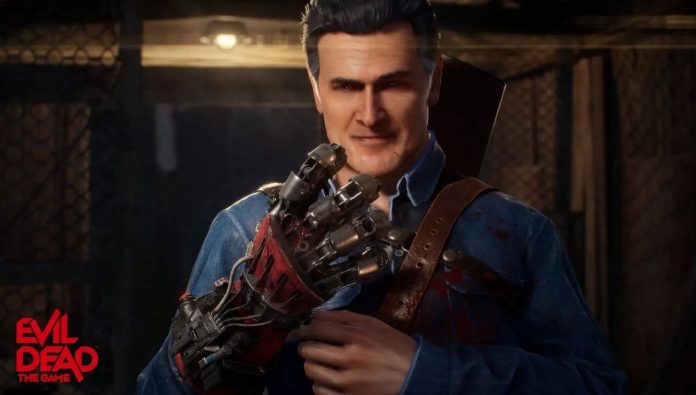 The Evil Dead is one of the best horror movies of all time. And its sequels and follow-up TV series maintain the horror while cranking up the fun factor.

What we never expected, though, was the series to eventually include a 4v1 asymmetrical horror game. But you know what? It works. Evil Dead: The Game captures everything that made the films and TV show starring everyone’s favourite B-Movie actor, Bruce Campbell, a success. There’s blood, there’s gore, there’s horror, there’s action, and there’s also a whole load of comedy. What’s more, it’s also just jolly good fun to play, win or lose.

Being a 4v1 asymmetrical horror game, your first choice is whether you want to play as a survivor or a demon. On the survivor side, you have characters from all the Evil Dead vehicles starring Bruce Campbell. (Sorry Evil Dead 2013 fans, there’s no Mia here. At least not yet, anyway.) That means you can play as four versions of unlikely hero Ash Williams, as well as supporting characters such as Pablo Simon Bolivar, Scotty, Lord Arthur, and even Cheryl.

There are 13 survivors overall, spread across four different classes: Hunters, Leaders, Support and Warriors. Choose a leader and you’ll find that they have auras that benefit the whole team and are more resistant to fear, a key mechanic in Evil Dead: The Game that we’ll get to later. Support class characters are similarly team-focused, able to carry more healing and defensive items and share their effects. Used correctly, these are the characters that truly lead a team to success.

For those that want to be the sharp end of the honed weapon that is your team, however, the Hunter and Warrior class characters will be more appealing. Warriors are essentially tanks, able to withstand more damage yet also deal it out. It’s a great class for those who want to go toe-to-toe with Deadites. Hunters, on the other hand, prefer to stay back and shoot at their enemies. It stands to reason that they would be able to carry more ammo. Overall then, there’s a class – and character – for everyone, especially considering each also has their unique unique skill and perks up their sleeves. 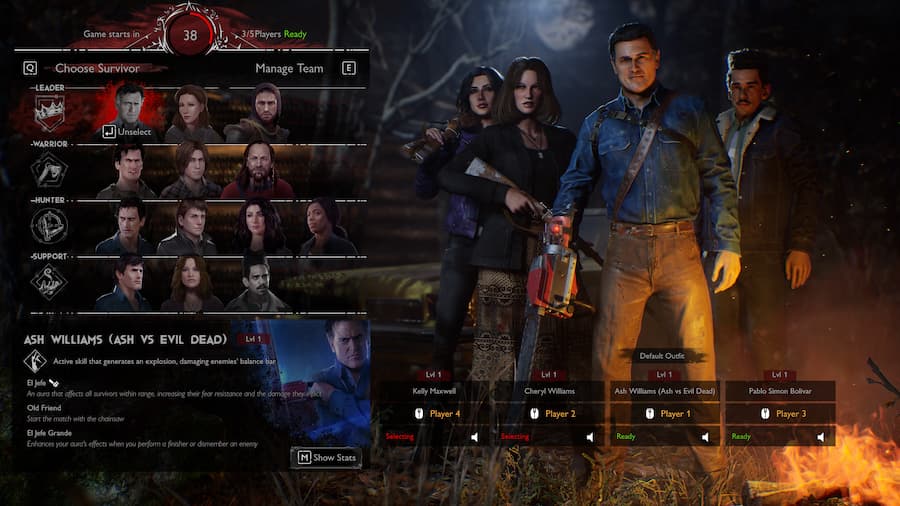 Jump into a game as a survivor, and the first few minutes feel reminiscent of a battle royale game. Thrown onto a map without any equipment, it’s a mad dash to get yourself equipped with a ranged and melee weapon, while also maybe grabbing some consumables to help at a later date. Then, once that’s done, it’s time to group on and get on with business. Go it alone as a survivor in Evil Dead: The Game and chances are you’ll meet an early demise and mess things up for your team.

You goal as a survivor is simple. First you need to find the three pages of a map, which will then give you to location of the Kandarian Dagger and pages of the Necronomicon. Getting these, however, is a bit tricky, as you’ll have to fight off waves of enemies to take control of them. But once you’re in their possession you’re on the final stretch. Using your new tools you can locate the Dark Ones. Defeat them, and then all you have to do is defend the Necronomicon until they’ve been sealed once and for all. Though it’s not always easy when demonic forces are unleashing all they have to stop you. 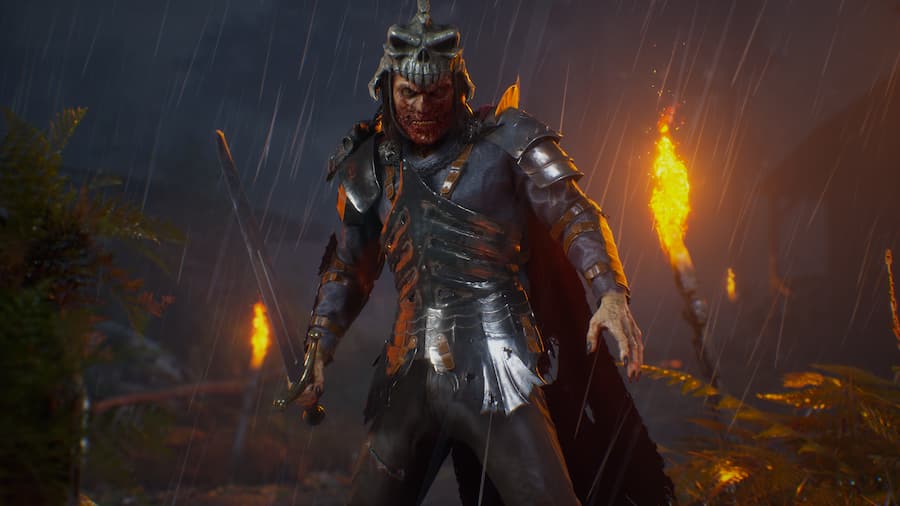 With the objectives being the same in every match, and there currently only being three maps, you might think that playing Evil Dead: The Game as a survivor gets old pretty fast. Amazingly though, it doesn’t. The maps available are surprisingly big, and with things like the locations of your objectives and resources being randomised, you’re always kept on your toes. Having to work as a team also keeps things fresh, with you working to complement your team members. But it’s the actions of your demonic competitor that really makes Evil Dead: The Game so unpredictable and exciting.

As a demon, you can play as either Henrietta from The Evil Dead 2, Evil Ash from Army of Darkness, or Eligos from Ash vs Evil Dead. And while as a survivor you’ll be playing entirely from a third-person perspective, here you’ll spend a lot of time zooming around in first-person, perfectly capturing the essence of the demonic presence as seen on film and TV. Your goal is to stop the survivors at all costs, but at the start of the match you’re not really equipped to do that. You’ll just have to concentrate on raising your threat level.

Collecting energy spread throughout the environment, you’ll begin by setting traps. You can rig supply caches with Ash’s decapitated hand so it jumps out and scares whoever opens it, for example. Or rig a tree so that if someone approaches it it lashes out with its branches. And as you go about your nefarious business, your threat level rises, granting you points you can spend to unlock and upgrade more methods of sticking it to the survivors.

Ultimately, you can create portals to summon basic and elite units. You can turn yourself into an all-powerful boss unit, too, able to dish out and take considerable damage. Possession is also an option: any demonic unit you can come across can be possessed easily, placing you under direct control. Though should one of the survivors become scared, which becomes more frequent as your threat level rises, you can possess them, too, forcing them to turn on their friends for a short while. You can even directly possess cars and trees if you wish. 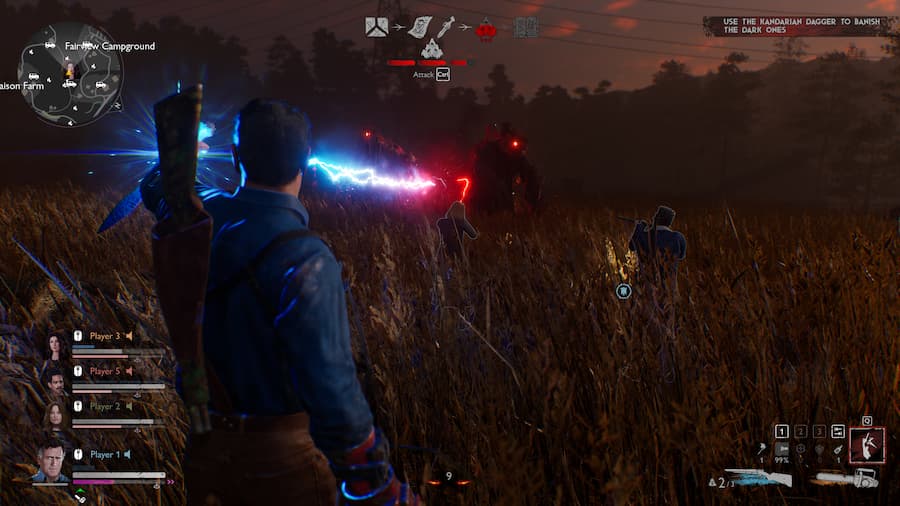 While the early stages of playing a match as a demon can be a bit slow, once you’ve located the team of survivors and developed your threat level things become an absolute ball. It’s so much fun toying with them and being a pain in their ass. Whether you’re hitting them with trees, trying to run them over, or simply bombarding them with portals of Deadites you’ll be having fun. Though nothing beats actually becoming a demon and moving in for the kill once you’ve got them on the ropes.

Some might question the game’s balance, but the truth is there’s only so much matchmaking can do. We’ve been in games where as survivors we’ve felt invincible working as a team. But in others the demonic forces were just too much, no matter how hard we tried. And the same goes when playing as a demon. Basically: you win some, you lose some. A strong player, or team, is always going to put up a good fight. And when you’re having such a good time, win or lose, what does it matter? 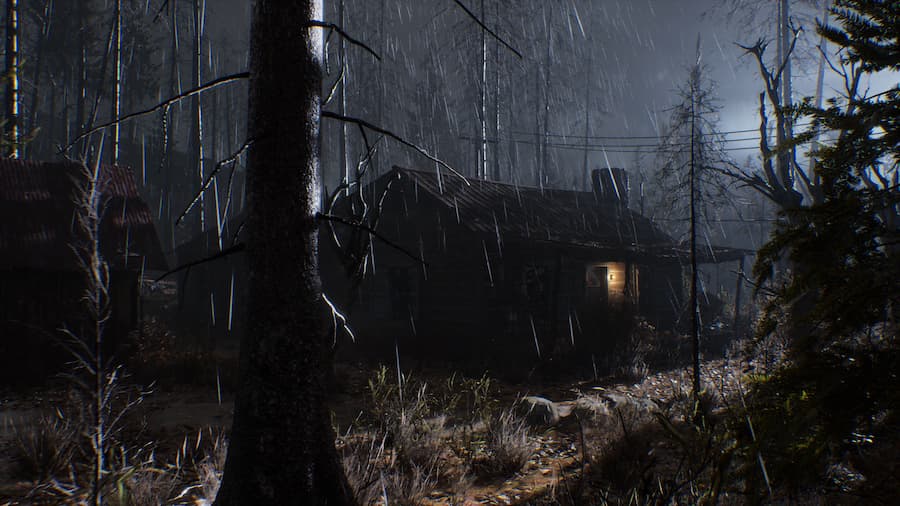 In reality, it’s just small, stupid things that bring Evil Dead: The Game down a little. Like the limited field of view that makes gameplay unnecessarily claustrophobic. And while it’s somewhat nice to have some single-player content, failing to add any checkpoints, making them rather tricky and locking a number of characters behind them seems a little mean.

Evil Dead: The Game has quickly become our favourite 4v1 horror title, and we can’t wait to see how it grows and develops. There are two distinct experiences to be had playing as either a demon or a survivor, but both are huge amounts of gory fun. And thanks to the fantastic atmosphere generated by the game’s visuals and map design, you’re genuinely kept on the edge of your seat as you play. We’re so glad that some 40 years after the release of The Evil Dead, the series remains relevant. And on the back of Evil Dead: The Game we think it’s got much more life in it yet. Come get some.

This review of Evil Dead: The Game is based on the PS5 version, with a code provided by the game’s publisher. It’s available on PS4, PS5, Xbox One, Xbox Series X/S and PC. 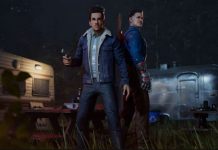