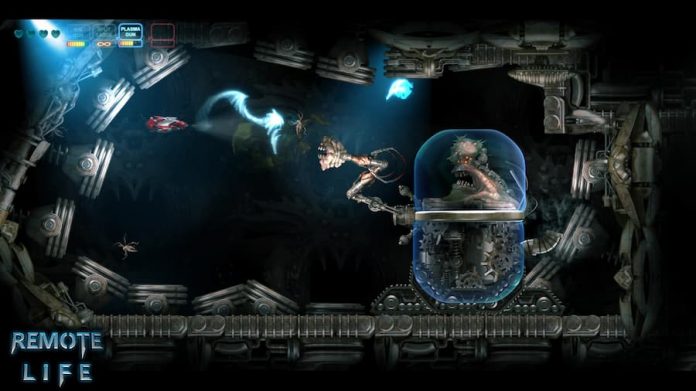 Remote Life, a retro side-scroller that channels the spirit of coin-guzzling arcade shoot-em-ups, is coming to consoles this May.

This pretty but faintly eerie blaster is the work of a solo developer and was released on PC back in 2019. Now, console players will get the chance to gawp at is gorgeous rendered levels and curse the many mechanical and bio-mechanical antagonists, screen-filling bosses included, that’ll try to murder you.

Remote Life will shake things up a little, sporting the odd escort mission or two – sure, you might be able to dodge bullets, but what about that giant vessel you’re supposed to be protecting. You know, the one that’s as manoeuvrable as an oil tanker in a sea of treacle? On top of that, in true shoot-em-up tradition, the scenery also hates you and may try to smash you to smithereens.

Remote Life 2 is already in development for PC, but console players will be able to get their hands on the original this May 27th, published by Ratalaika Games. It’s set to land on Xbox One, Xbox Series X|S, PlayStation 4, PlayStation 5 and Nintendo Switch, priced at $18.99 / €17.99 / £14.99 which, for sixteen levels, sounds like a pretty good deal.

You can check out the trailer above, which YouTube has cheekily labelled as Sine Mora, or take a peek at the PC sequel here.