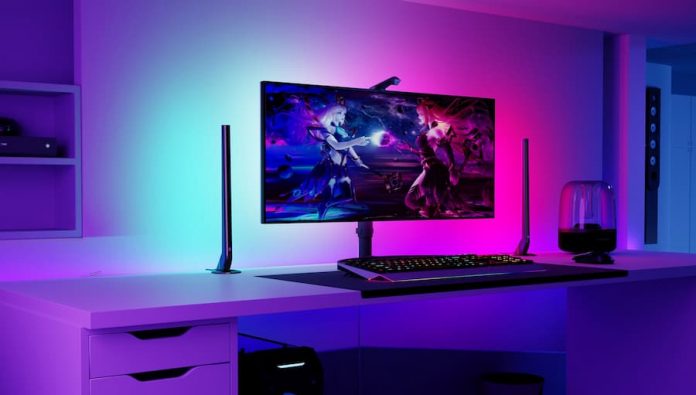 The Govee DreamView G1 Pro will make a real difference to your gaming experience.

That may sound like a lofty boast given that you’re essentially strapping a bunch of LEDs to your monitor (and sticking a couple next to it), but it’s the execution that makes this lighting kit worth your time and money. Instead of just blinding anyone who looks at your setup, the Govee DreamView G1 Pro lights up your gaming nook in ever-changing colours to match what’s displayed on your screen.

The box that the kit arrives in is surprisingly small. Manuals aside, the packaging includes two vertical LED bars, a flexible LED strip, clips to fit the strip to the back of your monitor, a fish-eye lens that perches on top of it, and what looks like a pad of orange post-it notes.

Set-up is relatively painless – it took me around 30 minutes in total. That said, ideally you’ll need a flatscreen monitor that a) is between 24 and 30 inches and b) has a flat back. I wasn’t aware of the latter requirement ahead of time (Govee has said this’ll be on the product page when the lights launch) but there was enough give that I could fit the LED strip over my monitor’s rear speakers.

The rest is relatively easy; pop the vertical LED bars on either side of the monitor (the manual recommends 30cm away), perch the fish-eye lens where you’d normally put a webcam, then plug the wires together. The final step is calibrating the device via the Android or iOS mobile app; you pop the post-it note-shaped foam pads on, then remove then when done. Then, you’re good to go.

Actually, “good” might be an understatement. In the right situation, the G1 Pro can be mind-blowing. The reason the package includes a fancy webcam is so that it can “look” at your screen and replicate the colours it detects. 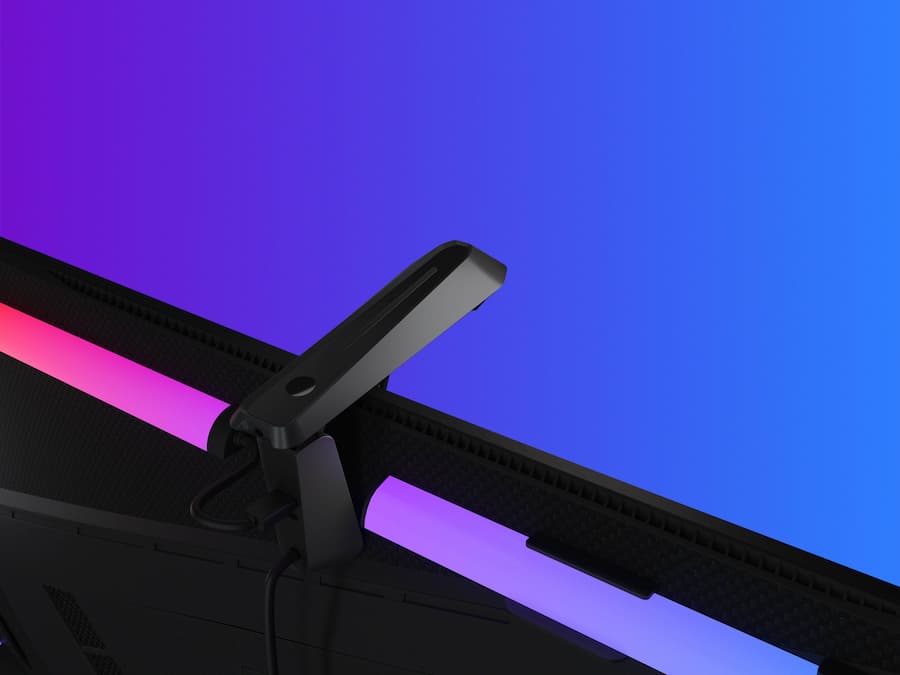 If you’re playing Grand Theft Auto V, just driving around Los Santos, the G1 Pro will subtly shift colours, which is a cool, relaxing effect. In fact, when there’s not an awful lot happening on screen, the Dreamview just compliments the chill. If you’re playing Skyrim and wandering around Whiterun, the wall behind your screen will turn light green. Gaze into a tavern’s fire and and it shifts to light orange.

But the Govee DreamView G1 Pro really comes into its own when there are major shifts in scene or a lot of mayhem unfolding. I fired up Dying Light: The Following and launched myself from a cliff into the lake below which, in itself, was a dramatic moment. What really elevated that experience was that the moment I hit the water, the whole wall behind my screen turned blue.

The more I put the G1 Pro through its paces, the more I wondered how I’d ever done without it. Well, except when I foolishly fired up Five Nights with Freddy’s just to see how the G1 Pro would handle its jumpscares. That… was not a smart move.

To be fair, it’s not just the lights themselves that make the Govee Dreamview such a game-enhancing experience. The accompanying Govee app is just as excellent; you can customise how the lights respond, create your own light patterns and so forth. You can use it with music too but that almost seems like a waste.

Take DOOM, for example. Using the app I instructed the Govee DreamView G1 Pro to react to audio, set it to shoot-em-up mode, and fired up iD’s 2016 demon-slaughtering semi-sequel. DOOM is designed to keep the action flowing and your adrenaline pumping, more so than the original. 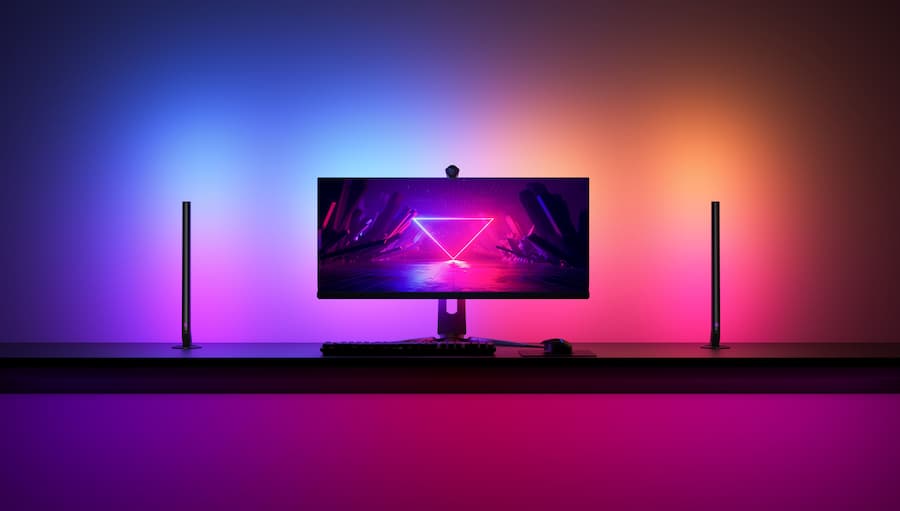 The lights, however, dialled things up to 11. When I stepped outside onto the surface of Mars, my PC nook was bathed in orange light. Then the demons turned up, the soundtrack kicked up and it turned the firefight into a light show. I knew it was my cue to calm down when the display on my wall finally settled.

That’s not to say the Govee DreamView G1 Pro is just for games where you wield a shotgun or swing a sword. Admittedly, I can’t see the lights being massively impactful with sports games but I also tested out a few horror titles, Amnesia: The Dark Descent included, and it made them just that little more bit chilling. In that case it proved more mood-enhancing to disable the G1 Pro audio mode.

The lights are meant to be used with a PC, but there’s nothing to stop you hooking up a console to your monitor’s HDMI port. I used a HDMI to HDMI and audio box to feed in the sound from my Xbox Series X and it worked a treat with the lights. You can also sync up a Google Home or Amazon Echo if you want to, though I haven’t tried this out. 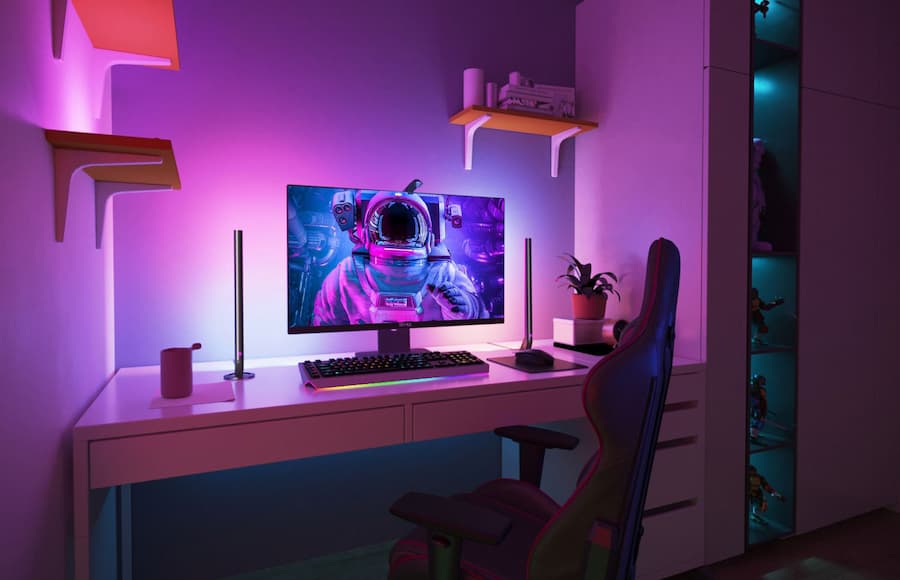 The G1 Pro is an impressive bit of kit, but is it perfect? No. For a start, if you want to the lights to react to in-game audio, you’ll need to plug a stereo audio lead from your PC to the light. So if you’re using a USB headset, you’ll need to switch to a non-USB one. There may be a way of outputting audio to USB and a speaker jack at the same time, but I had no joy.

And while you can remove the lights from your monitor – which you might need to do if you replace it, for example – you’ll need to take care, easing the clips away with a screwdriver. Ideally, I’d have liked to see Govee include something like a command strip whereby you can gently pull on part of the adhesive to release them. I know that if I do move these to another monitor at some point I’ll be sticking them back down with command strips.

And then there’s the price. As impressed as I’ve been by the Govee Dreamview G1 Pro, its RRP of $179 is steep. That’s just short of a the price of a decent gaming monitor. My review unit was free, but would I pay that much for it? Having spent time with it, I can safely say that yes, I would, but only when I’d souped up the rest of my PC setup first.

Govee boasts that this kit offers “pro-level gaming immersion”, and I’m inclined to agree. It’s a powerful and (thanks to the app) hugely flexible addition to your gaming setup. It’s not cheap, but it does make your games more immersive than ever. So, if you’re looking for the icing on your gaming cake, the Govee DreamView G1 Pro fits the bill perfectly.

Thanks to Govee for providing us with a review unit. 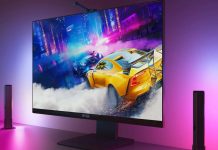