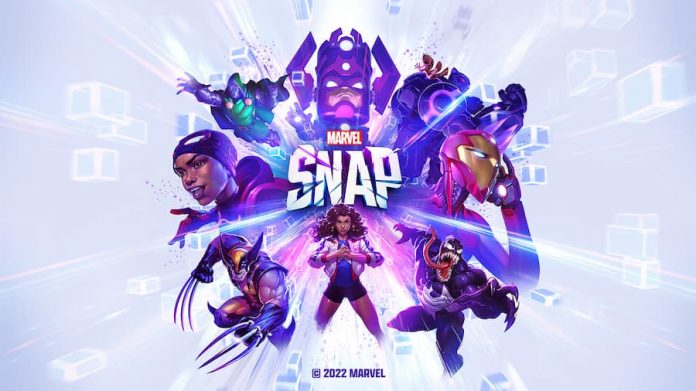 Marvel Snap is, surprisingly, nothing to do with the Marvel Cinematic Universe’s Infinity Saga but is, instead a free-to-play digital card game coming this year.

True, we’d pay good money for a game where you had to prevent Thanos from clicking his fingers, maybe by knocking Peter Quill unconscious or using Doctor Strange’s portals to chop his hand of – any of the stuff we ended up shouting at the screen, basically.

But Marvel Snap seems like it could be fun, not least because several of the people who’ve created it worked on Hearthstone. Compared to regular “snap” it has more than a few extra rules in place, making it an actual card battler, complete with effect cards and more. But, and here’s the bit that has us really interested, games typically take around three minutes.

Sure, there are games we’ll plunge hours and hours into, but Marvel Snap’s short play-time means you can get a few rounds in at lunchtime. You don’t even need your PC, because Marvel Snap is also coming to mobile and PC, developed by Second Dinner. Yes, that’s what the studio is really called and yes, it may just be the best name ever.

According to Second Dinner’s Chief Development Officer, Ben Brode, “We’ve worked tirelessly to ensure that the game is super deep for hardcore players, while remaining very approachable so everyone can jump in and have a blast.” We’re assuming that the final release will match people of similar ability, so newcomers aren’t constantly being annihilated by experienced players.

The game will, when it launches later this year, sport at least 150 unique cards, each with “variants” – essentially the same card, but with different art. Eg, apart from regular Galactus there’s a cutesy Galactus. Second Dinner and Nuverse, who are publishing the game, haven’t revealed the full roster but if you scroll down to the end of this article you’ll find a list of all the characters we spotted in the announce video.

Marvel Snap will arrive on PC and mobile later this year but, right now, you can apply for access to the closed Android beta. Be wary that this is a free-to-play game and microtransactions or similar may well figure into the final product.

Ready for that list? Here are all the characters we spied in the above trailer: