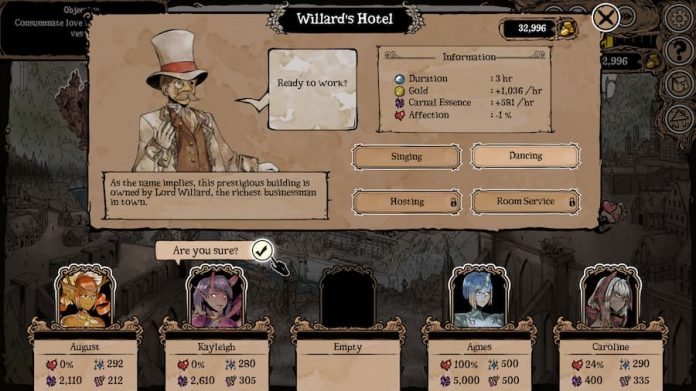 Think My Lovely Wife, the follow-up to My Lovely Daughter, sounds like more than a little creepy? You’re right.

But, while there are dating simulator elements at play, the weird factor doesn’t come from a whole string of women being instantly fixated on an anonymous protagonist. No, what makes My Lovely Wife borderline disturbing is that you’re trying to resurrect your wife through a series of disturbing endeavours and rituals.

The “Carnal Essence” you need to resurrect your wife is gathered by sending succubi out to drain the “lifeforce” (use your imagination) of willing victims. You then have to extract the essence by killing them. It sounds a little like some deranged pyramid scheme but, no dead succubi, no un-dead wife.

And no, that wasn’t a typo. We’ve seen Re-Animator enough times to know that bringing the dead back to life, in any movie, game or book, is not going to end well. It’s entirely possible that, for all your efforts, you get a wife who demands an actual human heart on Valentine’s Day.

My Lovely Wife is developed by GameChanger Studio and Toge Productions and published by Neon Doctrine. You can embrace the horror, which also includes 42 different endings, when it arrives on PC (via Steam) and Nintendo Switch this June 8th. Xbox, PlayStation and mobile versions will follow later.