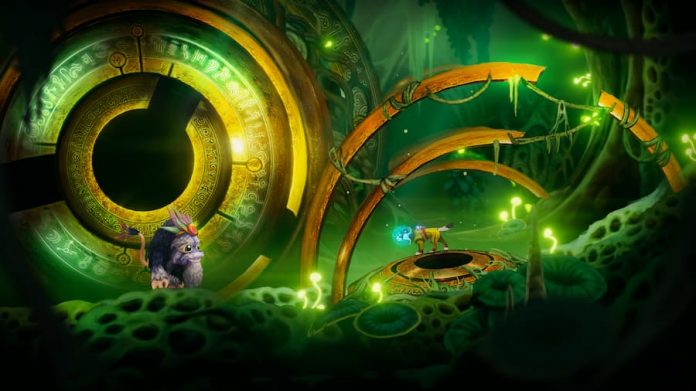 Space Tail: Every Journey Leads Home, which casts you as space-faring dog, is giving us mixed feelings.

No, we’re not had our hands on the game though it looks as if it could be a lot of fun. Your regular, non super-powered canine, Bea, has been sent into space and it’s your job to keep her safe on an alien planet. It’s a a 2.5D platformer which sees you mingling with a range of friendly and not-so-friendly lifeforms, including at least one screen-filling menace.

In other words, you’ll send a portion of the game running away from things though given how gorgeous Space Tail’s alien planet is, just roaming around seems rewarding. Developers Enjoy Studio and Longterm Games claim it’s a “a beautiful story about space and self-discovery” and we hope that Space Tail: Every Journey Leads Home will deliver.

What has us raising an eyebrow, however, is the game’s backstory:

“Many intrepid animals paved our way to the stars – and saw up close what people would encounter years later. In Space Tail: Every Journey Leads Home, Bea is the only animal to survive the journey…” it reads.

Choosing to link Bea to the other animals that were launched into space seems is a questionable decision and calling those animals “intrepid” is glossing over the horror. Remember Laika, the Russian dog that was launched into space? In 1957 she was taken off the streets (perhaps she thought she was finally going to be looked after) and placed aboard Sputnik 2. However, the people who put here there had no idea how to get her back and she died terrified and alone in space.

She wasn’t the only animal to expire in space, nor was it just Russia launching animals into the void – there’s a whole list of animal fatalities, which makes for grim reading. And, while we might get a kick out of Space Tail: Every Journey Leads Home, we just know we’ll end up thinking about Laika and all the other animals who died in or on their way to space.

You can join Bea on her adventure, and try not to think about those other causalities, when Space Tail: Every Journey Leads Home arrives on PC, via Steam, this Fall. In the meantime, you can check out the trailer above or wishlist it on Steam.