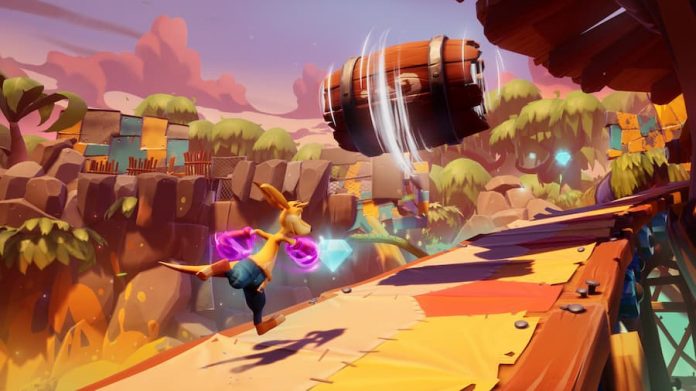 You probably won’t need too much help to hit the ground running with Kao the Kangaroo, but we’ve got some tips that’ll help you get the most out of the game.

A 3D platformer inspired by the classics, Kao the Kangaroo is all about running, jumping, fighting and exploring. Easy stuff, then, but it’s packed with secrets and stuff we wish we’d have known right from the start. Let us help by making it a bit easier for you! With these tips, Kao the Kangaroo will be more enjoyable than ever.

This one goes without saying, but don’t simply run from A to B in a level. Spend some time exploring and looking for secrets. They come in many forms: tucked-away platforms to jump up on, or small gaps to slide under, for example. You might find hidden treasure beyond – like coins, K-A-O letters, gems and more. You really do get more out of Kao the Kangaroo if you spend time to fully explore each level.

You’ll amass a lot of coins, and quickly, in Kao the Kangaroo. Here’s our best tip: spend them! Unlike other platformer games, where coins might automatically turn into extra lives, here they just keep adding up. Before you know it you’ll have thousands. Head to the shop – there’s one to be found in the first hub world – and get spending. You can buy costumes, heart containers and other useful items that’ll help you on your way.

Hit checkpoints for hearts and coins

Checkpoints are dotted fairly liberally through levels. They look like lampposts, and they’ll automatically activate when you pass them, so you won’t ever lose too much progress. However, they hold a secret! Hit a checkpoint repeatedly and it’ll spew coins and a heart. If you’re low on hearts, be sure to give the last checkpoint a few whacks to heal yourself.

Pay attention to enemies when you’re in combat. See those dots that appear above their heads? That means they’re about to attack. Press circle (or B on an Xbox controller) and you’ll do a dodge roll. Be sure to hit dodge whenever you see those dots appear. You’ll save yourself a lot of damage.

Use your power attack wisely

Above your head in battle, you’ll see the triangle button (or Y on Xbox) appear once in a while. Don’t mash it willy-nilly: it does a powerful area attack, damaging anything in its radius. Wait until you’ve got several enemies nearby and hit it. It’s very handy for getting out of sticky situations.

The hub worlds are more than just areas to move from one level to the next. Of all the Kao the Kangaroo tips we can give you, this one is perhaps the most important: yes, once again we’re telling you to explore! These hub worlds are filled with colourful characters to meet, lots of coins to collect, and various collectibles to pick up. Go inside huts, explore around hidden corners and even behind waterfalls. You never know what you might find.