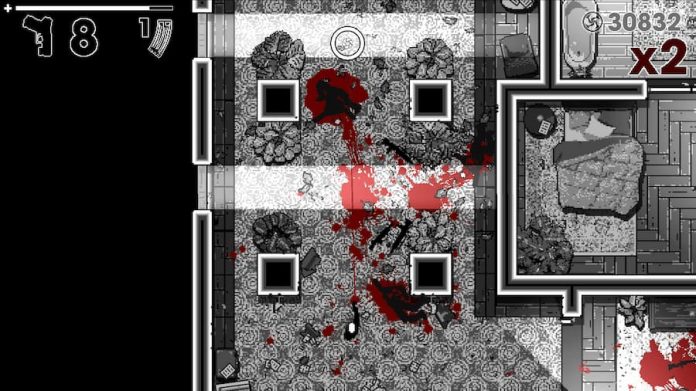 OTXO, a new game from the maker of Dogworld, is coming to PC courtesy of Super Rare Originals.

This top-down shooter resembles nothing so much as a monochrome Hotline Miami, though it features a time-slowing mechanic that should, in theory, bolster your chances of survival. It’s the work of developer Lateralis, previously responsible for the excellent Dogworld, with the only splash of colour being the blood you spill. Nice.

OTXO sees you entering an “..inexplicable mansion in search of your lost love”, and sees you battling your inner demons. We’re hoping its ending is more satisfying than “it was all a dream” but going by the trailer the journey itself may be worth it.

It’s being handled by Super Rage Originals, the digital publishing division of Super Rare Games, who started off life publishing physical versions of Nintendo Switch games. OTXO is coming to the PC though, given they brought Grapple Dog to Nintendo Switch, we wouldn’t be surprised if OTXO came to consoles.

OTXO doesn’t have release date or even a release year as yet but you can take a PC demo for a spin right now, thanks to Steam’s Going Rogue event which runs from May 2nd to May 9th. Or if you’ve not got the time to shed some claret you can check out the trailer above.