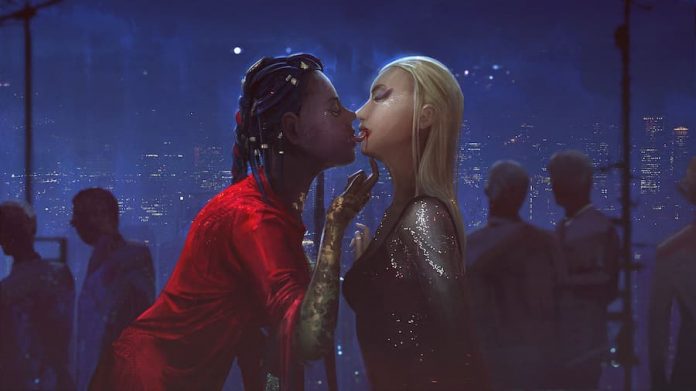 Being a vampire isn’t always quite as glamorous as the movies would have you believe. At least, according to the Vampire: The Masquerade universe.

The latest game in the long-running series is Vampire: The Masquerade – Swansong, putting you in charge of three different vampires. They may be sophisticated, but with a strict council in place that dictates practically everything they do and an elite government agency hunting them down, eternal life isn’t exactly peachy. And quite how things pan out depend on you and the choices you make while playing.

Swansong is described as a “narrative RPG”, which feels pretty apt. It’s missing the action and combat that you might expect from a standard role-playing game, but it does feature skill points, upgrades and player-led development typical of the genre. It’s also part exploration adventure, part puzzle game; you’ll spend an awful lot of time exploring your surroundings, searching for clues and solving environmental puzzles.

The narrative part, though, is perhaps the most important element of Vampire: The Masquerade – Swansong. Based on a long-running tabletop RPG series, the rich lore of the world you find yourself in is at the forefront. It can be a little overwhelming at first, in fact; if you’re not already well-versed on the customs and factions of the Vampire: The Masquerade universe, don’t expect to be eased in gently. You’ll be thrown head-first into the thick of things, and you have no choice to hit the ground running, hoping that the pieces of the puzzle will come together later.

Thankfully, they will – just about. There’s a built-in encyclopedia of sorts where you can look up certain things about the world, from terminology to key characters. It’ll no doubt come in handy. And the longer you spend with each of Swansong‘s three characters, the more you’ll come to know them, their motivations, and their struggles. 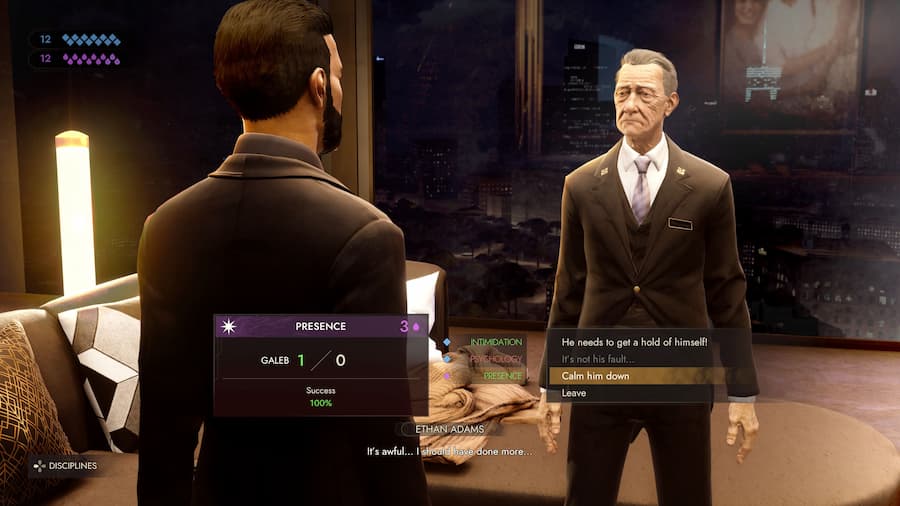 Each character you play as – Emem, Galeb or Leysha – each has a very different backstory. As such, they each have different skills to be used, all of which can come in useful. Leysha can mask herself, for example, making herself invisible when the situation calls for it. And, as you progress, you’ll earn skill points for each character, allowing you to strengthen their abilities in certain disciplines. Maybe you want them to be master hackers, or perhaps you want them to be able to overpower any conversation with the power of persuasion. It’s up to you – but some skills are undoubtedly more useful than others.

You’ll spend a chunk of time in Vampire: The Masquerade – Swansong in “confrontations” with NPCs. The game’s verbal answer to combat, these heated discussions give you several options to choose between, but many of them come at a cost. Certain choices cost energy points, of which you have a finite amount, while others will increase your bloodlust. As such, you’ll need to consider each choice carefully; weighing up your likelihood of succeeding in the confrontation against the cost of it isn’t always easy. And sometimes you’ll find yourself in a situation where it’s impossible to win.

That’s perhaps the worst thing about Swansong. With multiple outcomes and branching narratives for each character depending on the choices you make, sometimes it just feels out of your control. Depending on how you’ve spent a character’s skill points, for example, or even depending on what you’ve been doing leading up to a confrontation, you may be destined to lose. And if you do, you’re stuck with that outcome. There’s no retries or do-overs here – well, not unless you want to replay the entire level, which could be over an hour or more.

So, coming to terms with your failures is part and parcel of the Vampire: The Masquerade – Swansong experience. And once you accept that you simply can’t win every single element of the game, you’ll have a much better time with it. After all, that’s life; not everything goes our way. The same goes for vampires.

You’ll jump between all three characters as the narrative calls for it, each one completing their own parts of a larger picture. With instructions being given by the powerful Prince of Boston, Hazel Iverson, each playable character has an important role to play in protecting the Masquerade and ensuring their clans can escape the wrath of the unstoppable vampire hunters. Each chapter feels suitably different; maybe you’ll be infiltrating a rival clan, or perhaps you’ll be disguising yourself as a police officer to investigate a murder scene.

This isn’t a game that’s afraid to be dark and grizzly; be prepared to see decapitated bodies and people being tortured, amongst other things. If you’re squeamish, you might want to give this one a wide berth. But if you revel in the macabre, you’re going to love it. An early chapter that sees you investigating a massacre at a vampire party perfectly set the tone for us. Hunting down clues amongst some truly gruesome scenes is peak Swansong. 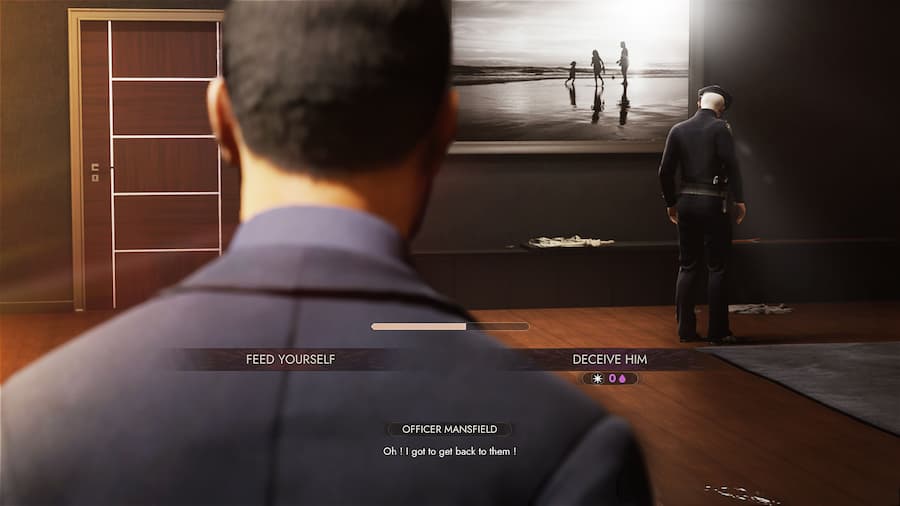 There’s much more to it than blood and guts, of course. If you enjoy strong narratives, you’re going to love Vampire: The Masquerade – Swansong. It’s been developed by Big Bad Wolf, who made episodic adventure The Council. If you’ve played it, you’ll recognise some of the same gameplay systems here. But everything feels tighter, more refined and more polished. Well, in terms of mechanics, at least; Swansong‘s visuals aren’t quite up to scratch, with character models in particular looking a bit rough around the edges. It’s easily forgiven though, once this dark tale gets its fangs in you.

For fans of vampiric tales, dark narratives and grizzly visuals, there’s a lot to love about Vampire: The Masquerade – Swansong. You may be thrown straight into the deep end, but once you acclimatise yourself with the fascinating, macabre world around you, you’ll feel right at home. It blends intriguing storytelling with investigation, skill-building and player agency, leading to a game that you’ll most likely struggle to put down.

This review of Vampire: The Masquerade – Swansong is based on the PS5 version of the game via a code provided by the publisher. It’s available on PS4, PS5, Xbox One, Xbox Series X/S and PC.

How to Get the Vessel to Leave the Injection Room in the Red Salon in Vampire: The Masquerade – Swansong 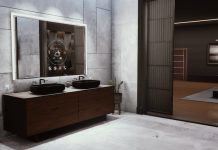 How to Find the Safe Room in Moore’s Apartment in Vampire: The Masquerade – Swansong

How to Reduce Hunger in Vampire: The Masquerade – Swansong

How to Run in Vampire: The Masquerade – Swansong