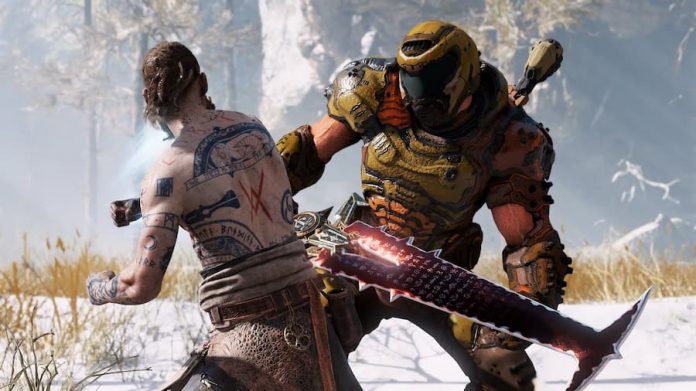 Ever wonder who would win in a fight, Doom Eternal’s Doom Slayer or God of War’s Kratos?

The correct answer is that they’d fight each other to a standstill, which is why this PC-based mod from modder Omega Fantasy doesn’t go there. Instead, it swaps Kratos for the Doom Slayer, letting you take on Baldur and the game’s other foes with as id Software’s own badass.

And, while you’ll have to contribute to Omega Fantasy’s Patreon to get your hands on the mod, they’ve uploaded footage of the mod in action. Kratos’s voice is muffled by the music they’ve overlaid over the video so, to all intents and purposes, the mute Slayer is taking on the mouthy Stranger, later revealed to be Baldur.

But.. hang on, how can Doom’s marine/slayer go toe-to-toe with a god? We’re going to avoid spoiling Doom Eternal’s big reveal but there’s a very good reason he can slaughter his way through hordes of demons and come out with a pulse. In fact, if you’ve not played Doom Eternal and its two expansions, you should go and play it right now.

We’re eager to see what bizarre match-ups Omega Fantasy will conjure up if God of War: Ragnarok hits the PC. As is it’s pencilled in for a PlayStation release, though with a 2022 release planned you might have to wait till Christmas to play it.