Bend Studio, developer of Days Gone, Syphon Filter and more, has unveiled a new logo and it does look rather cool.

There’s a lengthy explanation as to why Bend chose this logo, which resembles a mountain range in an inverted triangle, over at PlayStation Blog. Why PlayStation Blog? Because despite the lack of “Sony” in their name, Bend Studio is a first-party PlayStation developer, owned by Sony and based in the Oregon town of the same name.

The rationale behind the new logo is.. interesting, to say the least. For example, there’s a “..small break in the “I” that represents one of the lumber mill smokestacks that speaks to Bend’s history as a logging town before its current existence as an outdoor enthusiast destination.”

The logo was, however, concieved in-house, which should give Bend a sense of ownership. And, as the studio notes, it gets two important things right. First, it’s easy to recognise without the need for text and, secondly, Bend can alter it to give it a stylised look. Feast your eyes below and you’ll see how it could used for Pride Month, Valentine’s Day or the cover of a power metal album.

Aside from unveiling the logo, Bend Studio has also shone a little more light on their next project. It’ll build upon the open-world systems featured in zombie motorbike game Days Gone, though it won’t be a Days Gone game – instead, it’ll be a new IP. It’ll also feature a multiplayer element though Bend haven’t confirmed it’ll be multiplayer only.

If you’re wondering why we haven’t had a Days Gone 2, the studio did propose a sequel but Sony turned it down. Could Sony resurrect it in the future? It’s possible, but don’t count on it happening any time soon.

You can read the full PlayStation Blog article here, which includes a reflection on Bend’s past. And if you want to get involved in their future, and are prepared to move to Bend, Oregon, check out the studio’s many job postings. 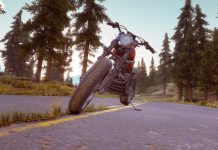