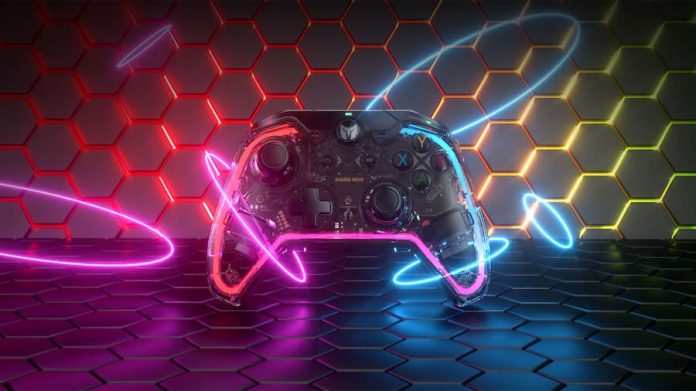 BigBig Won’s Rainbow Game Controller may look pretty, but there’s more to it than some fancy LED trim and a transparent controller shell.

Yes, it’s wired, which may be an immediate turn-off for some, but if you’ve got a PC it’s a  powerful piece of kit. It will work with the Nintendo Switch and, if you pay roughly £20 for the BigBig Won R90 adapter, it will also support PlayStation 4 games on both PS4 and PS5. But the BigBig Won Rainbow Game Controller really comes into its own when you plug it into a PC and start meddling with its many programmable features.

The transparent shell and LED trim makes the BigBig Won Rainbow eye-catching, to say the least. Unlike PowerA’s Spectra Infinity controller, it doesn’t sport lights around the buttons, though gawping at the vibration motors as they kick up into a spin is more entertaining than you might think. There’s a mobile phone app that lets you meddle with the light colours, so instead of going through the full rainbow, the controller cycles through just a few.

The BigBig Won is modelled on an official Xbox Controller and, for the most part, it’s as comfortable and easy to use as the official Xbox pad. The three-metre cable was long enough that I never once found myself reaching for a wireless pad, too. And the cable’s detachable so you can swap it out for a longer one if needs be – or if a pet decides the cable looks particularly delicious. 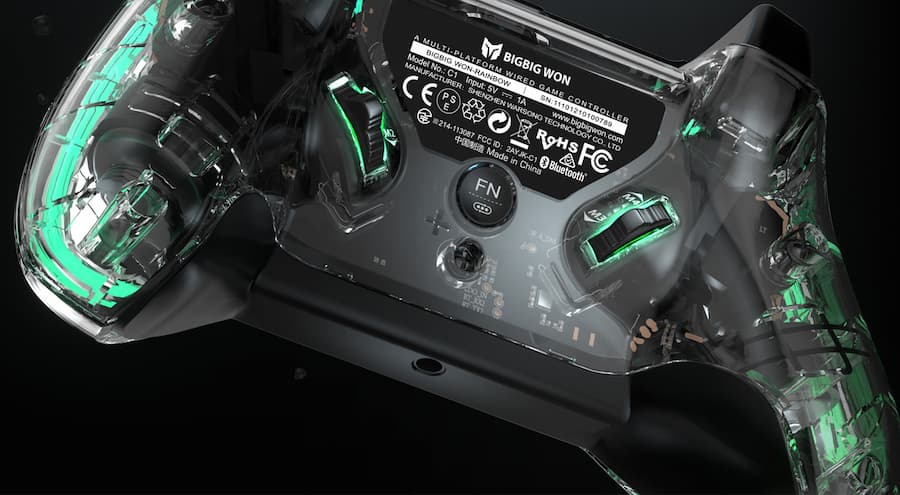 Like the HexGaming PlayStation 5 Ultimate controller, the Rainbow has four additional buttons at the back. But what made me grin was the discovery that, unlike the HexGaming pad, you can assign multiple buttons and d-pad presses to one button. Want to launch a special weapon then switch back to gunplay? The Rainbow has you covered.

If you’re a fighting game fan, you could map Street Fighter 2’s famous fireball movement to a single button. Or if you’re fast enough with your fingers, you can pull off a piledriver with one button press. That is, again, assuming you’re on PC; plugged into a Nintendo Switch the Rainbow supports autofire but not programmable buttons, which is why it’s ideally suited to PC gaming.

And that’s even before you dive into the app, which is the icing on the cake. Yes, you can meddle with the LED lighting but you can also tweak virtually every aspect of the controller – joystick dead zones, macros and even the gyro settings.

The way the BigBig Won Rainbow controller implements gyro is pretty cool. Independent of any game, you can assign motion control to either the left of the right stick. So even if a game doesn’t technically have motion control, you can still control your driving or shooting by waggling the Rainbow around.

You can create your own controller configurations or import a variety of pre-provided ones, though I cringed at the app’s shoddy translation: “For some popular game we summarized the somatosensory setting configuration to guide the newcomer experience the pleasure of somatosensory faster.”

The poor translation isn’t the only issue I came across. The Rainbow’s four rear buttons are in fact attached to two wheel switches: push the left wheel one way and you get M1, press it the other way and you get button M2, activating whatever function you’ve assigned to those buttons. You get the idea.

But when you’re not actively using those buttons, the “spike” on the wheel sticks out, in the exact place where your fingers come to rest when gripping the controller. It’s not uncomfortable exactly, but you’re always aware the switches are there. BigBig Won should have swapped the wheel out for a less prominent switch and while it doesn’t ruin the Rainbow, on occasion I found it distracting.

In short, the BigBig Won Rainbow is a powerful, flexible and undeniably pretty controller which Steam picked up right away. On top of that, it costs just £49.99/$49.99 which, when you consider all the features this packs in, is a steal.

I wouldn’t advise you pick it up if you’re just planning on using it with a Nintendo Switch, but if you’re a PC gamer, and you can live with periodically grumbling at the pointy rear buttons, the BigBig Won Rainbow Gamepad is a lot of controller for not a lot of money.

A sample unit was provided by BigBig Won for the purposes of this review.