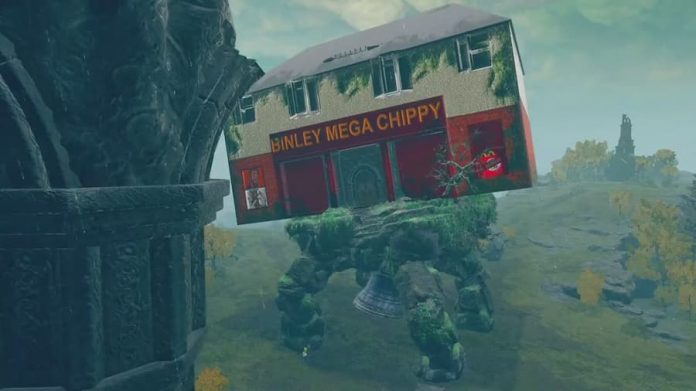 Ever wanted to fight a massive, sentient chip shop? Us neither, but we’re still awed that Binley Mega Chippy has been modded into Elden Ring.

In case you’ve missed all the fuss, Binley Mega Chippy is a fish-and-chip shop, based in Coventry, UK, that’s become inexplicably popular. There’s no real logic behind its entrance to memedom though, with people flocking to the real life location, the shop’s owner is doing good business. Now, the big red chippy has come to Elden Ring.

We have PCGamesN to thank for spotting this gloriously odd mod. The Walking Mausoleums, while they retain their trademark mossy legs and dangling, worryingly testicular bell, have had their buildings switched out for Binley Mega Chippies.

At least, one of them has (we’re hoping it applies to all), and a tweeted clip from YouTuber ToastedShoes shows Homer Simpson (yes, really) taking on the mauso-chippy. We’ll have to wait till ToastedShoes’ next “Elden Ring but Ruined by Mods” video to find out just how formidable the mobile Binley Mega Chippy is.

ToastedShows may be showcasing the mod, but it’s the work of modder Garden of Eyes. It’s not clear whether the mod will be publicly available; Garden of Eyes makes some available through their Patreon, but a lot of the mods Toasted Shoes uses seem to be crafted exclusively for use in his videos.

But with Binley Mega Chippy still dominating the news (apparently there was also some nonsense involving in the Queen but we weren’t really paying attention) we’re all in favour of it memeing its way into other games. Metal Gear Chippy anyone?