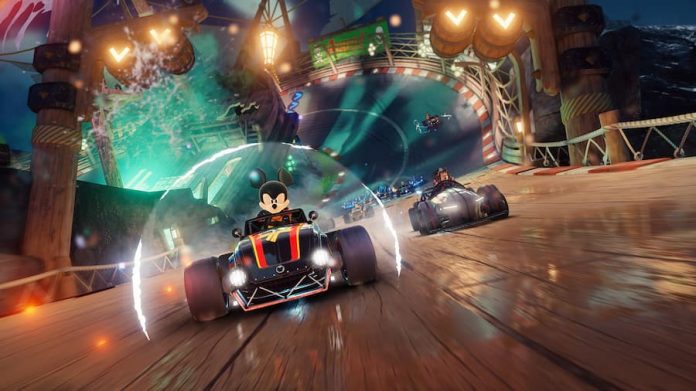 Did you know that Disney had a kart racing game on the way, developed by Gameloft? No? We don’t blame you. But Disney Speedstorm deserves more attention.

Perhaps there hasn’t been much buzz around Disney Speedstorm because it’s a free-to-play game. Also, Gameloft usually develops for mobile, where its Asphalt Racing series has been hugely popular. Disney Speedstorm isn’t being confined to mobile, though, as it’s set to release on PS4, PS5, Xbox One, Xbox Series X/S, Switch and PC. And after going hands-on with it thanks to a closed beta, we think it might just be one of the best kart racers we’ve ever played.

Disney Speedstorm may be free-to-play, but it’s not multiplayer-focused. There is the option to play online against others, but the main attraction here is an adventure mode where you make your way through chapters, upgrading and customising your drivers and karts as you go. You’ll start with just Mickey Mouse, but there’s a varied cast here including Captain Jack Sparrow, Baloo, Mulan, Hercules and even Belle.

See Disney Speedstorm in action in our gameplay video below:

Kitted up for racing, the characters are presented here in a way that you’ve never seen before. They each have their own special skills, too, which you can make use of out on the track as well as other skills usable by all. You’ll be able to try lots of these characters as you make your way through Disney Speedstorm‘s adventure mode. But if you want to race as them on a more permanent basis, you’ll need to unlock them. But more on that later.

On the track, the action is chaotic. But in the best possible way. A boost start can be achieved by keeping your revs in a green portion of a meter displayed onscreen. Get it right and the screen warps as you burst forward – the snazzy effect is the first sign that no expense has been spared on the game’s production. And it continues. The special skills that you pick up and use are over-the-top and eye-catching. Meanwhile, destructible elements litter the tracks and their surrounding, breaking realistically when hit.

It all makes for a kart racing game that looks and feels lightyears ahead of others. It’s as if you’re cast in the central role of a new Disney movie about kart racing. The handling is responsive and light, but the karts react to bumps and changes of inertia as if they’re real. The cinematic camera helps to ramp up the tension, too.

The final piece of what makes Disney Speedstorm‘s gameplay so great is its tracks, each of them offering multiple routes and shortcuts. Sometimes you can jump up to a higher level that cuts a few corners out, for example. And some feature rails you can grind to get the advantage.

While it’s only currently in Beta then, Disney Speedstorm is already mightily impressive. Our only concern is its free-to-play nature. You need currency to unlock things such as characters and cosmetics, and materials to upgrade your karts to keep them competitive. Plenty can be earned by simply playing the game, but some may feel the urge to splash the cash to accelerate their progress. And we’re keen to see if it does eventually come to feel like a grind to unlock additional content.

Still, it appears you’ll be able to have plenty of fun for free when Disney Speedstorm launches later this year. We wish there was a complete version we could simply buy rather than deal with the usual free-to-play trappings, but we’re sure we’ll find ourselves jumping in nonetheless; the exciting kart racing action here is just too good to miss. And if you’re a Disney fan, it’s made even better thanks to the familiarity of the characters and locations.