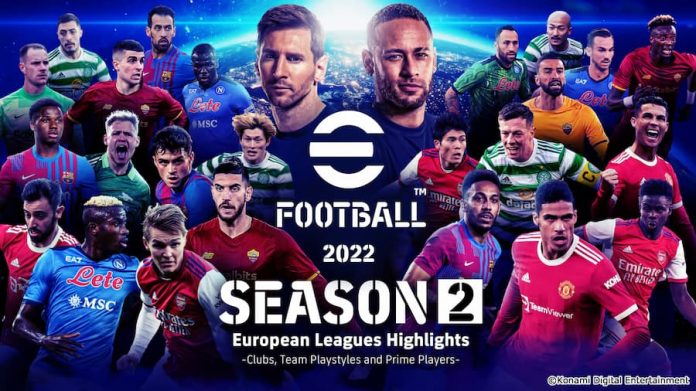 eFootball 2022, which has replaced the Pro Evolution Soccer series, launched back in September as an Early Access game, though Season 1, the “proper” version of the game ended up being delayed until April 2022.

Now, Season 2 is here and it’s focusing more on “Team Playstyles”, which we initially read as Team Hairstyles (to our later disappointment). Each player or manager has a Team Playstyle Proficiency which will determine how well they work as a team, though the strategies you choose also have a bearing on their success or otherwise.

On top of that, Season 2 adds new player packs to let you purchase top level players. You can even pick up Lionel Messi and Neymar Jr for 2,000 eFootball coins each. That’s around £15 in real money each, though, which isn’t exactly cheap. Yes, we’re wary of microtransactions so we’re not the main audience here, but it still seems pricey.

Another big change, one that doesn’t involve emptying your wallet, is that the mobile version of Pro Evolution Soccer is now eFootball 2022. It was meant to launch much earlier but, like the PC and console versions of eFootball 2022, it hit a snag. It’s now available on iOS and Android.

You can find all the Season 2 details here, and pick up eFootball on PC, PlayStation, Xbox,  and mobile.