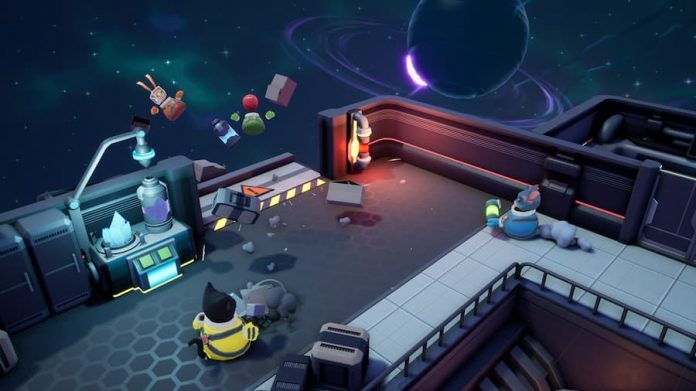 In the same vein of Overcooked! and Moving Out, Fueled Up takes co-op busywork shenanigans into space.

Instead of trying to keep a busy kitchen running or packing someone’s belongings into a removal van, Fueled Up tasks you with trying to keep a spaceship moving through space. You’ll have engines to keep fueled, damage to patch up, battery-powered doors to keep shut, and more. Fail, and a giant space octopus is going to kill you. No pressure, then.

Like other party games of its ilk, Fueled Up requires you to work together in order to succeed. It’s simply impossible to stick to one task and work independently here, as an important piece of equipment might be behind a door that only opens when someone is stood on a button, for example. Cue lots of shouting of “open the door!” and “someone push the button!”

We’ve been playing Fueled Up with two players, and it’s hectic. Even in the game’s easiest levels, it’s impossible to feel like you’re on top of everything. Breaches in the hull open up at an alarming speed, and just after you’ve finished refuelling an engine, it’s going to need topping up again. Thankfully, levels are short; you only need to keep control for a few minutes before it’s all over. But in those few minutes, so many things can go wrong. 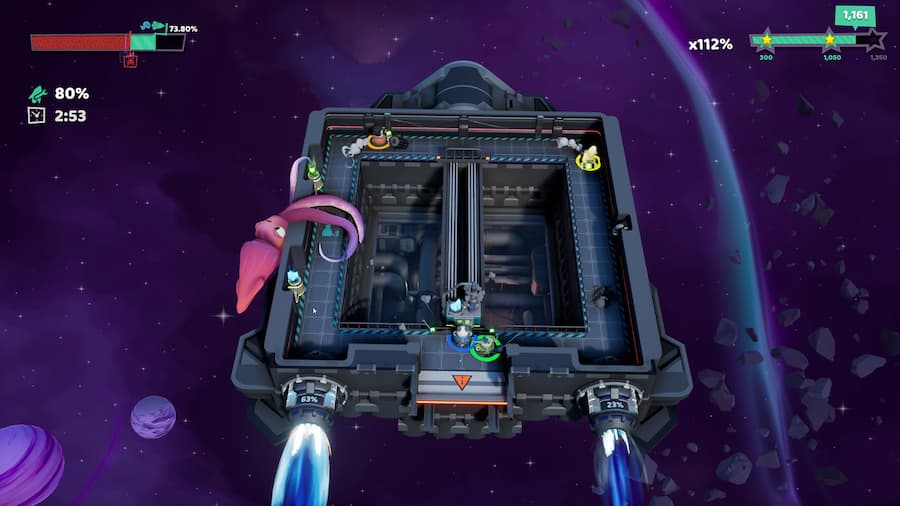 Later levels introduce more calamitous obstacles to stand in your way. Flying through a wormhole will move around the equipment in your ship, for example. Batteries may be where the fuel refiner was a minute ago, and vice versa. It takes long enough to get your bearings to begin with, since each level sees you on board a different ship, and so throwing a wormhole into the mix can really throw you off.

But wormholes are just the start of it. You’ll need to contend with invading space squids, payload doors that can throw you out into space, asteroid showers, fires, toxic leaks and more. Honestly, Overcooked! feels like a breeze in comparison.

Fueled Up supports up to four players, and with more people in the mix, the chaos may feel a little more manageable. At least to begin with, anyway. More players means more sets of hands to stay on top of everything. One player could simply be in charge of opening doors while another focuses on refuelling and two more on patching up the hull, for example.

If you’re a fan of mad-cap co-op games, then Fueled Up is going to be worth a look when it releases later this year. It doesn’t reinvent the wheel; it simply takes it to space and makes it even more chaotic and stressful than ever. But with a few friends on a couch together, this could be a recipe for intergalactic hilarity.

A demo of Fueled Up is available now as part of Steam Next Fest. Click here to give it a try.