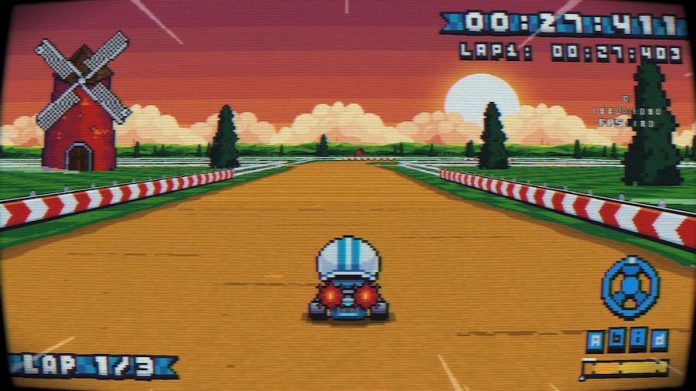 Generic Kart Racer could be the nostalgia trip we didn’t know we needed.

The work of developer Grim Games, Generic Kart Racer is heavily inspired by the good old days of 90s kart games, such as Super Mario Kart on the SNES and the Mega CD’s BC Racers. Yes, as much as we loved the Mega Drive, it was unfortunate that Sega’s console needed an expensive add-on just to match the SNES’s Mode 7.

It’s still early days for the title, but just watching it in action makes us grin. We feel like leaning to the left every time GKR’s equally generic driver takes a turn, as we did when we were playing Super Mario Kart. And we defy you not to smile at the track names revealed thus far; Beginners Beach and  Formula Farm.

Aside from the drifting shenanigans that figured so heavily into Super Mario Kart, GKR also sports proper track-side detail, which was largely absent from the former title. The CRT-style scanlines help dial up the nostalgia factor though we assume there’ll be an option to turn those off in the final release.

Added a much more dynamic camera, a new colour variation for our main racer – as well as the ability to brake while drifting to really hug those hairpins! 🏎️🌬️🏁#indiedev #pixelart #indiegamedev #gamedev pic.twitter.com/EgS5tFXpW1

Yes, Super Mario Kart is available through Nintendo Switch Online, but Generic Kart Racer has our attention because it couples the flat, Mode 7 tracks of Super Mario Kart coupled with a big dose of pixel-art polish and the aforementioned trackside trappings.

There’s no news as to when it’ll be released, or which platforms it’ll grace (it’s being developed on PC), but Generic Kart Racer seems as if it has real promise. You can keep up with its development by following Grim Games on Twitter.