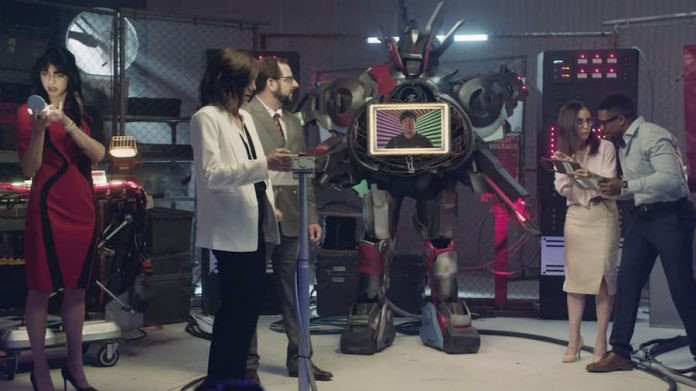 Did you miss out on Devolver Digital’s Countdown to Marketing? Don’t worry, we’ve got you covered.

At least, we’re going to tell you about the games you missed out on seeing at Developer Digital’s Countdown to Marketing conference. We’re not going to dive too deeply into the glorious chaos that framed these announcements. Several years ago, Devolver Digital had Nina Struthers (actually actress Mahria Zook) host a “press conference” that relentlessly mocked E3 presentations and subsequent years have delivered the same level of lunacy.

But we certainly grinned at developer Suda 51’s participation, looking for all the world like a knock-off of Robocop 2’s Mecha-Cain. We urge you to watch the conference in full because there’s a lot of silliness packed into just 25 minutes. As for the games, here’s what was on show.

From Free Lives, the developers of Broforce, Anger Foot is an equally ridiculous action game (albeit an FPS) that sees you blasting and booting your way through hordes of enemies. If you’ve ever played Duke Nukem 3D and spent half the time just booting foes in the face, this could be right up your alley. It’ll arrive on PC in 2023 though there’s a pre-release/demo version available on Itch.io right now.

We got wind of Cult of the Lamb back in February 2021, and were impressed by its curious premise. Developed by Massive Monster, it sees you venturing out in the wood to recruit members for your woodland cult, hacking up monsters as you go. It’s not for the faint of heart, despite the lovely cutesy graphics, and will arrive on PC, Switch, PS5, PS4, Xbox S/X and Xbox One this August 11th. Or if you can’t wait, you can download a PC demo right now.

Sam Eng’s Skate Story is both eye-catching and unsettling, though in an entirely different way to Cult of the Lamb. Yes, it’s a fantastic-looking skateboard adventure but you’re not just kickflipping for larks. Instead, you’ve been tasked with destroying demons and, just to complicate things, you’re made entirely of glass so taking a tumble could turn out very badly for you. There’s no solid release date but it’ll grind onto PC some time in 2023.

Unlike the other three titles (Devolver Digital also reminded us that the promising Card Shark is out now on PC and Switch), The Plucky Squire is a hitherto unrevealed game. It casts you the Jot who, along with his friends, discovers there’s life outside their storybook. Yes, the in-book art-style is adorable, but what’s really impressive is the transition between Jot’s 2D incarnation and the way he appears when he enters the “real” world. It’s coming to PC, PlayStation 5, Nintendo Switch and Xbox Series X|S in 2023.

And there you have it though, again, we encourage you to bathe in the ridiculousness that is the full Devolver Digital 2022 conference. And if you missed out on last nights Summer Games Fest Live announcements, you can catch up here.