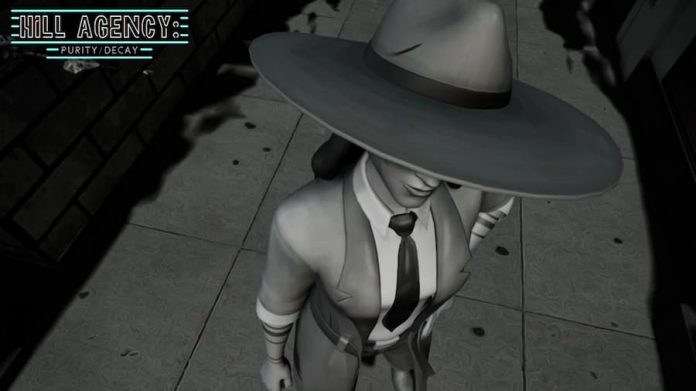 The neon-meets-noir trailer of Hill Agency: PURITYdecay, which you can watch below, caught our attention immediately. And the idea of a detective game that we’re completely in control of? Sign us right up.

You see, Hill Agency promises that it won’t ever solve a mystery for you, or even nudge you in the right direction. It’s down to you, the player, to know if you’re following the right path or not. You’ll need to carefully examine your surroundings, ask the right questions of your witnesses and use your own honed skills to separate real evidence from red herrings.

Set against a futuristic backdrop, Hill Agency: PURITYdecay takes place in a society that’s been separated into two distinct groups: the working class and the Elite. The working class make a living on ‘The Ground’, while the Elites live in high rise buildings; literally (and figuratively) looking down on those below them.

It’s not the most original idea – we’ve seen it done before across all forms of media – but it’s still an interesting one, and one that should make for an engaging world to explore.

Players will take on the role of Maygeen Hill, a tracker-turned-detective. Starting out on The Ground, she’s got a mystery to sniff out and unravelling many narrative threads.

Watch the trailer for Hill Agency: PURITYdecay below:

Don’t let its oddly-stylised name put you off; we’re excited to see more of Hill Agency: PURITYdecay. Its premise and setting sound fascinating, and we’re intrigued by the promise of full player agency. It’ll be available on PC on 31st August 2022. Wishlist it on Steam by clicking here.