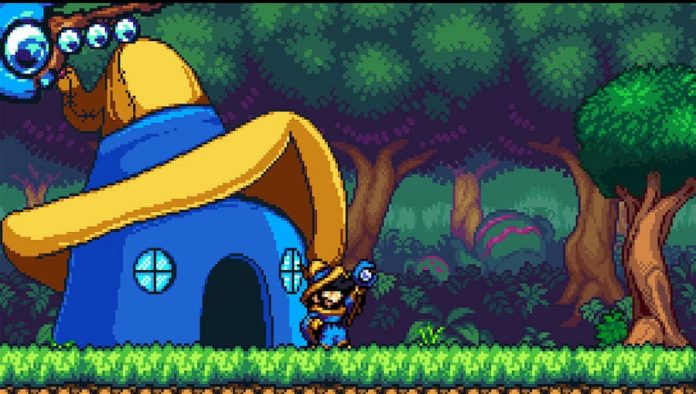 Available now on Steam, Mago is a must-play for any fans of retro platforming games.

This isn’t a retro game, of course. Mago released only last week, made by developer Dream Potion. But you’d be forgiven for thinking you’ve unearthed a lost Mega Drive classic. It certainly looks, plays and sounds the part.

Playing as the titular wizard, Mago has you running and jumping your way through fairly linear levels, with hidden collectibles to pick up along the way. Jump on enemies’ heads, Mario style, to kill them, or shoot at them with your magic wand to stun them. You’ll want to do the latter fairly often, as often enemies will provide the stepping stone you need to reach a higher platform.

Between platforming levels you’ll explore a top-down overworld, accessing new levels via the map and engaging in random encounters in between. You’ll collect coins as you go, allowing you to buy outfits and new items for Mago. So it pays to be as thorough as possible, picking up as much stuff as you can in each level. But you already knew that. This is retro platforming 101.

That isn’t to say that Mago feels derivative. It very much captures the spirit of a retro classic, but it’s also something unique. A variety of stages keeps the gameplay feeling varied; as soon as the second level you’ll find yourself running through the world as a giant blue bird, challenged to pick up as many coins as you can. There’s also a village to visit with stores to shop at, NPCs to meet, and secrets to uncover.

In other words, Mago is delightful. Yes, it’s old-fashioned – perhaps to a fault – but for those of us who revel in classic 90s platforming games, there’s a whole lot to love here. Even better, it’s only £11.99/$14.99. So, what are you waiting for?

Mago is available now on Steam.