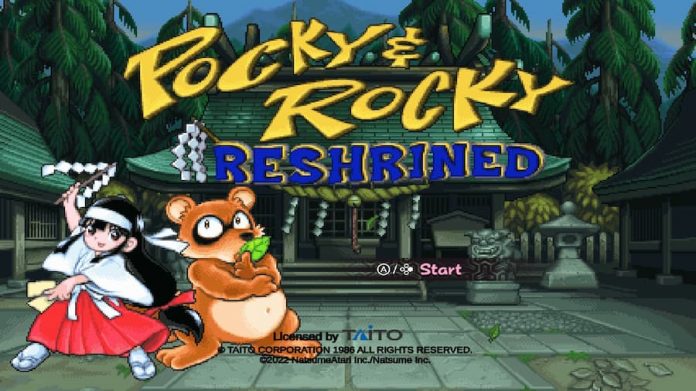 Fans of classic games have a lot to celebrate this week. We’ve had the release of Sonic Origins, Capcom Fighting Collection and now Pocky & Rocky Reshrined. It might be lesser-known, but this retro shooter very much deserves your love.

Originally released on Super Nintendo back in 1993, Pocky & Rocky is a scrolling shooter with a difference. Where the genre typically sees you in a spacecraft or similar, this time you’re on foot, firing out magical projectiles in front of you. It makes for a somewhat unique experience, and it’s brought to life thanks to stand-out visuals and a catchy soundtrack.

Even back in 1993, Pocky & Rocky looked wonderful. And now, with Pocky & Rocky Reshrined, a remaster of the original, it looks even better. The beautiful pixel art looks sharper than ever, and the now-widescreen environments truly shine. The audio has been redone too, with 16-bit tracks that really have stood the test of time.

This isn’t a game for the light-hearted, however. Despite its cutesy characters, Pocky & Rocky Reshrined is one of the more challenging games in the genre. You’re going to have to put in some serious practice before you can breeze your way through its levels. But it’s worth the work, because there’s a lot of fun to be had on the journey. 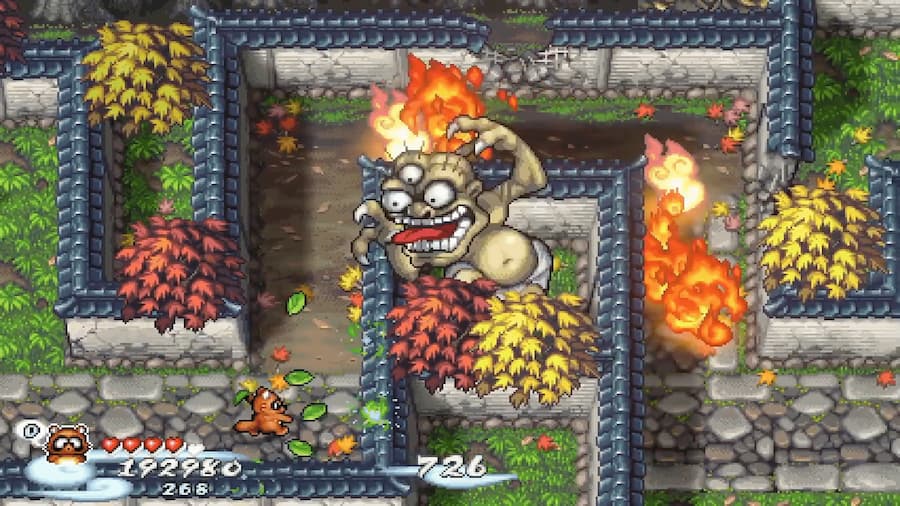 You see, enemies pile in from all directions, but you can only shoot in the direction you’re facing. You might be moving up the screen or you might be moving to the side, and so your projectiles will typically go in the direction you need to be moving in. It takes some getting used to; a lock function would be a big help, allowing you to keep shooting in one direction while moving freely. But you will eventually get the hang of Pocky & Rocky Reshrined‘s quirks and (hopefully) embrace them.

There’s a wide range of enemies to come up against, from demons, the undead, balls of fire and god-knows-what else. Their sprites are all excellently designed, but they don’t hold back. You’ll need to keep your wits about you to avoid taking damage, even on the game’s default ‘Normal’ setting.

Yes, even Normal is taxing – and from the outset, that’s the easiest difficulty available to you. There is an ‘Extra Easy’ mode, but for some bizarre reason, it’s locked out until you’ve gathered 3,000 coins in Normal mode. Of course, if you relish in a challenge, hard difficulty is available too. Good luck to you.

Thankfully, no matter what difficulty you play on, you have a good range of skills available to you. Four core abilities make up your repertoire: there’s a standard attack, a dodge roll, a special attack that damages everything on-screen, and a deflect move which doubles up as a melee attack. As you play, you’ll collect various power-ups for your standard attack, although taking damage will power it down.

To truly master all of Pocky & Rocky Reshrined‘s levels, you’re going to have to make use of all four abilities. You’ll also soon encounter various enemy types that can only be damaged by particular attacks. For instance, the second level introduces fireballs which only respond to your melee attack.

From the third level onwards, you’ll also gain additional skills for your standard attack and deflect, expanding your repertoire even further. Needless to say, then, you’ve got a decent amount of moves at your disposal, and it means that the action never feels stale or boring. 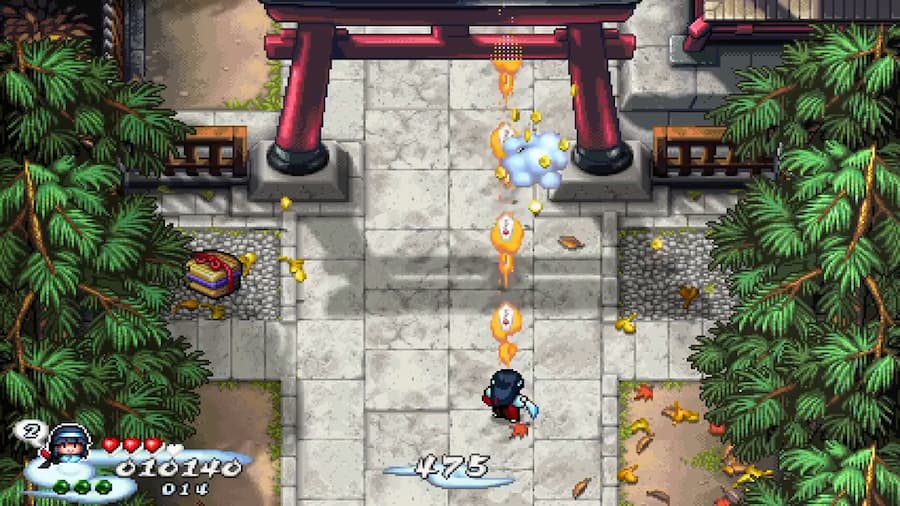 It also helps that there’s a variety of characters available, each with their own unique movesets. You’ll initially control the titular shrine maiden, Pocky, before taking control of her raccoon pal, Rocky. As you play, more characters become available, too. And once you’ve finished the story mode, you’ll unlock Free Play, where you can jump into any level as any character.

For fans of the shooter genre, Pocky & Rocky Reshrined offers something a little different, and it’s well worth jumping into. Despite being almost 30 years old, it still feels fresh and compelling – helped by its wonderful visuals and soundtrack. Throw in a cast of great characters, each with a unique set of moves, and various modes to jump into, and there’s a lot to love here. We just wish the easy mode was unlocked from the outset.

This review of Pocky & Rocky Reshrined is based on the PS4 version of the game (played on PS5), via a code provided by the publisher. It’s available on PS4 and Switch. The game is available digitally and physically, with limited boxed versions available from Games Rocket.