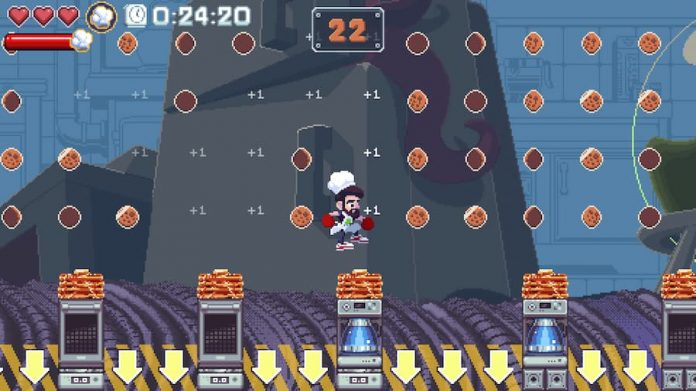 Back in 2018, Lillymo Games released Perils of Baking, a 2D platformer that saw the younger of two brothers trying to stop his evil sibling’s plans.

Never heard of it? No worries, because now it’s been remade and released on a wider range of formats. The premise is the same but everything is bigger, better and prettier. Although all that being said, Super Perils of Baking, as it’s now called, does little to stand out from the generic 2D platformer crowd.

In a campaign that spans 50 stages, you’ll primarily find yourself walking, running and jumping to negotiate platforms and other obstacles, all the while avoiding or decimating an army of sentient foodstuffs.  There are doughnuts, cupcakes, slices of toast leaping out of toasters, and a whole lot more. Most can be banished from the world by jumping on top of them. Others can only be overcome by pelting them with whisks. And some can’t be eradicated at all unless you get creative.

If there’s one thing that is to be learned from Super Perils of Baking, it’s that having a beard is a sign of strength. You start Super Perils of Baking as a fresh-faced young sir, though by collecting cookies and other foodstuffs you steadily build your health. In your basic form jumping on enemies is your own form of attack. But consume those calories and you’ll turn into a bearded strong boy, able to pull whisks from out of nowhere and fling them at your foes in an arc. 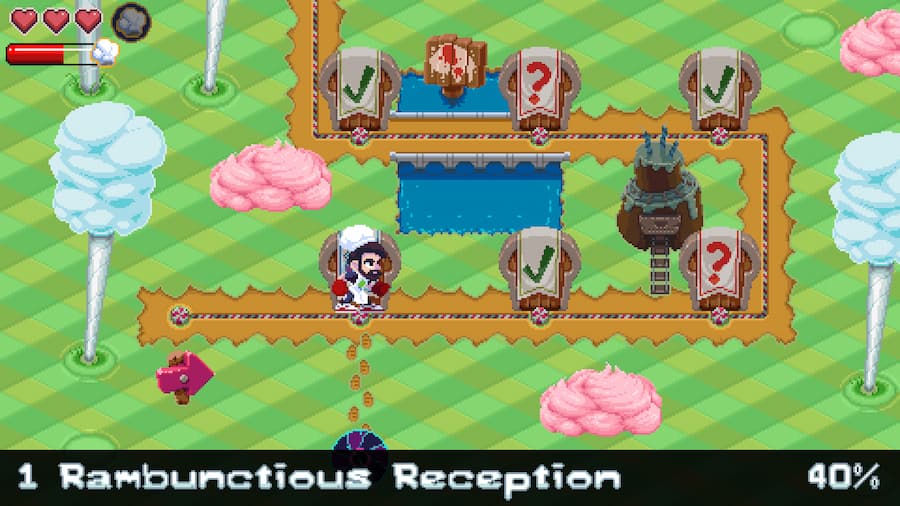 The levels start out fairly simple but steadily get more challenging. Soon you have to deal with hazards such as spike pits, and moving platforms on which obstacles and enemies become even more perilous to encounter.

Lose all of your hearts or fall into a pit of doom and you have two options: go back to your last checkpoint or restart the stage. The choice is yours. But either way, while Super Perils of Baking is tough at times, it never feels overly frustrating.

To keep things interesting, there are a smattering of mine cart stages mixed in with all the on-foot action. After all, you can’t make a classic 2D platformer without those, can you? There are stages where you grab hold of gentlemanly balloons and float around flinging whisk with reckless abandon, too. Throw in some obligatory underwater stages and a handful of boss encounters, and you at least have a 2D platformer that keeps you on your toes from one stage to the next.

You could power through Super Perils of Baking in just a handful of hours, but completionists will get much more out of it. There are the letters B-A-K-E to find in each and every stage, for example, as well as time goals to smash and accolades to be earned for completing stages without taking any damage. A number of challenging special stages are available, too, plus unlockable playable characters that put a new spin on the action and a New Game+ mode.

While Super Perils of Baking can feel a tad too generic at times, then, is has to lot to offer for its modest price. It evokes the spirit of 90s platformers that were never as popular as the big hitters – games like Zool, Cool Spot and Boogerman. And so for those who yearn for a new platforming experience that relishes in that old-school feel, it’ll go down a storm. Perhaps the worst thing about it is its soundtrack, but that can be easily remedied. Ultimately, it will never be remembered as a classic, but Super Perils of Baking can at least remind you of the golden days of the genre.

This review of Super Perils of Baking is based on the PS5 version with a code provided by the game’s publisher. It’s available on PS4, PS5, Xbox One, Switch and PC. 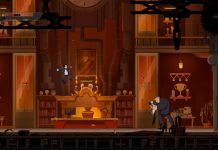