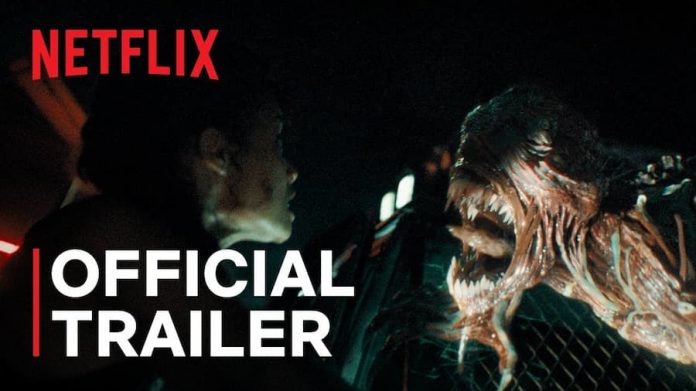 Netflix has released a new trailer for its upcoming Resident Evil series, sporting a glimpse of the licker, one of the franchise’s most infamous monsters.

The licker has a nasty habit of hanging on ceilings and dropping down when you least expect it, which means the show’s heroes could be in for a spot of bother. The trailer also features what appears to be a giant spider, so if you’re an arachnophobe you might want to steer clear.  But between this and the previous two Resident Evil trailers, we’re seriously looking forward to this Netflix series.

The trailer leaps between the Umbrella’s New Raccoon City, their gleaming high-tech metropolis, and a devastated London, some fourteen years or so in the future. The former seems much more interesting because who doesn’t like seeing a city get torn apart by zombies and mutants? Anyway, 28 Weeks Later and 28 Months Later gave us our fill of post-apocalyptic London Town.

Apart from the licker, which looks suitably menacing, the trailer also features Wesker going off the rails, punching a hostage and smearing himself with blood. There’s also a scene with a humanoid figure punching its way out of a tank; it looks too small to be a Tyrant. Our money’s it being Wesker, which would explain his return, albeit in a different body.

There’s also an unsettling line about keeping your mouth closed, which makes us wonder if we’re going to get a glimpse of the Drain Deimos. This beast, last seen in the Resident Evil 3 remake, forces its spawn down its victims throats which is as unpleasant as it sounds.

You can check out the trailer above for a few other snippets, or watch Netflix’s Resident Evil series (which is set in the same universe as the games) when it arrives this July 14th.