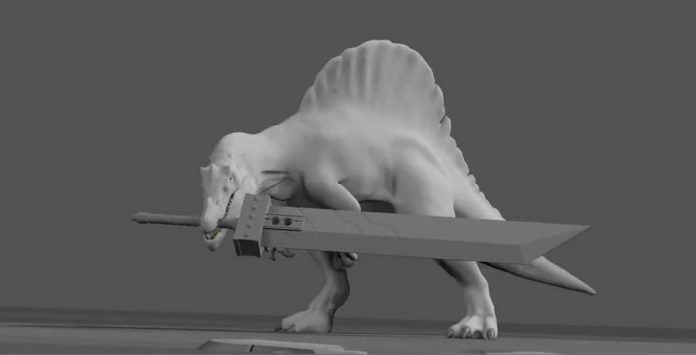 Ever wanted to see a dinosaur wield the Buster Sword from Final Fantasy VII? Us neither, but now we’ve seen this animation we can’t stop rewatching it.

It’s the work of 3D animator Jean Nguyen, who works for Sucker Punch Productions (developer of amongst other games, Ghost of Tsushima). The Buster Sword animation isn’t part of a specific game, let alone a Final Fantasy one, though the prospect of fighting sword-wielding dinosaurs makes us grin. Instead, it’s just a cool practice animation they’ve crafted.

What’s particularly impressive is that it’s not some anthropomorphic dinosaur wielding a sword in its hand, Extreme Dinosaurs style. Nguyen has, instead, rendered a massive Spinosaurus, swinging the gigantic Buster Sword around in its mouth, with a real sense of weight, before collapsing to the ground and getting up.

It’s the same kind of daft, barely practical movement that crops up in some boss fights; it’s so heavily telegraphed that you should have got plenty of time to move out of the way. But if you’re still there when the sword comes down, and you’ve got no-one to blame but yourself, you’re losing half if not all of your energy bar.

Nugen describes it as “Jurassic World meets Dark Souls” and while, to our knowledge, that game doesn’t yet exist, if anyone – Sucker Punch, for example – were to take the concept and run with it, we’d just throw our money at them. Heck, just put this sword-wielding dinosaur in the next Final Fantasy game – we’re good with that.

You can watch the dinosaur sword animation above or through Nyugen’s Twitter account, and check out their portfolio here.