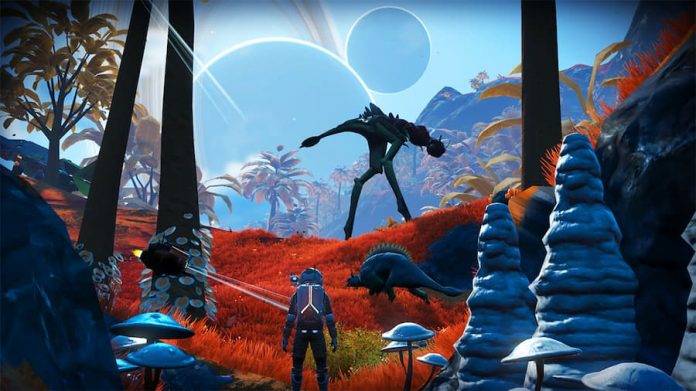 No Man’s Sky is coming to the Nintendo Switch this October – at least, most of it is.

No Man’s Sky launched on the PlayStation 4 and PC back in 2016 and, while we got a big kick out of roaming the galaxy,  there’s no denying that the game didn’t live up to developer Hello Games’ hype. Hello has, since then, provided update after free update, to the point where No Man’s Sky is everything that was promised and more. And now, it’s coming to Nintendo Switch, complete with all that extra content.

As of October 7th, Switch players will be able to fly from planet to planet, system to system, uncovering all manner of alien wonders. Should you so choose you can roam around in a mech, build your own base, go deep sea diving, purchase a massive freighter.. there’s just so, so much to can do, which includes taking the game on the go.

So what’s the catch? The catch is that the Nintendo Switch version of No Man’s Sky will, at launch, be single-player only. That means no meeting up with other players, no joint expeditions and, should you choose to give your discoveries mucky names, no-one else will get to chortle at Planet Big Hairy Bumhole.

In other words, there’s the possibility that the Nintendo Switch release will get multiplayer later, but Hello Games aren’t making any promises. It’s not a game-breaker for us personally, but it’s still a fairly large omission.

No Man’s Sky will launch on the Nintendo Switch this October 7th, as both a physical release and a digital Nintendo eShop release. It’s also currently available on PC, PlayStation 4, PlayStation 5, Xbox One, Xbox Series X|S and PC.